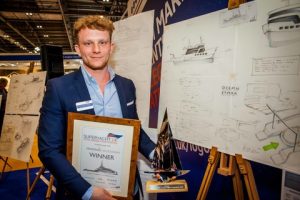 Philanthropic design proved the key to success at this year’s annual Superyacht UK Young Designer Competition 2018, in partnership with Pendennis Shipyard and Olesinski, as Christopher Mobley, a transport design student from Staffordshire University, was crowned the winner last week at the London Boat Show.

In close second place, Ashley Scott, a product design student from University of Plymouth, was crowned runner up. Whilst Christopher Mobley received the prize of a four-week internship at world leading custom superyacht builder and refit specialists and event sponsor, Pendennis Shipyard, Ashley Scott secured himself a two-week internship at world leading design and naval architecture studio and event sponsor, Olesinski based on the Isle of Wight.

The prestigious annual Superyacht UK Young Designer Competition is run by industry representatives, Superyacht UK, an association of British Marine. It is the only competition of its kind in the UK and is among a select few across the world to recognise future design talent and provide them the opportunity to truly grow such talent within the industry. The competition is judged by a world-class panel of designers and superyacht experts, including Chairman of Superyacht UK, Peter Brown from Burgess, Stephen Hills from Pendennis Shipyard, Justin Olesinski from Olesinski, Tony Dixon from Redman Whiteley Dixon, Bill Dixon from Dixon Yacht Design, Dimitris Hadjidimos from D-iD Limited and former Superyacht UK Young Designer 2016 winner, Dastinas Steponenas.

This year’s design competition was unlike any other. Rather than being greeted with a blank piece of paper, the 10 competing students from Coventry University, Southampton Solent University, Staffordshire University, University of Central Lancashire, University of Plymouth and University of Wales, Trinity St David were tasked to transform a 52.12m ex-navy vessel, the Ocean Star, into a bespoke superyacht. Out of them, two aspiring designers shone out, proving both their creativity, knowledge, scaling and engineering capabilities.

Featuring innovative ideas such as the launching system of the submersible vessel at the aft end and the extending beach club from the mid ships, Christopher’s superyacht design was voted the most imaginative for the client – a proclaimed philanthropist, looking for the ideal superyacht to support research into the problem of plastics in our oceans, whilst also offering luxury transport to peruse his passion for adventurous and unique holidays.

“It is great to see so much up and coming talent from our British universities and we hope this competition has helped inspire these students with the diversity and wonders of a career in the superyacht sector and the connections and experiences they have gained throughout the competition prove fruitful. We look forward to seeing these students, and many more like them, driving forward Britain’s superyacht powerhouses in the future.”

Upon being announced the Superyacht UK Young Designer Competition 2018 winner, Christopher Mobley remarked: “It’s amazing. I am still a bit shocked but over the moon about winning this year’s Superyacht UK Young Designer Competition. It is a great opportunity. Already this competition has allowed me to meet a variety market experts and learn from their depth of knowledge. Winning has provided me with a massive confidence boost in my ability and skills as a designer.”

VIEW  highlights of the Superyacht UK Young Designer competition, in partnership with Pendennis Shipyard and Olesinski.