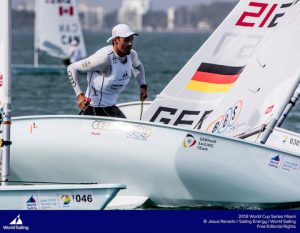 For athletes looking to burst out of the blocks and vigorously shake off any holiday rust at the 2018 World Cup Series Miami, USA, the opening day was a struggle.

The wind played hide and seek for all of the morning—tempting at least one race officer into starting a race that would eventually be abandoned—before filling in the afternoon and allowing six of the 10 fleets to get in at least one race.

Miami is welcoming 543 sailors from 50 nations and when the wind did fill in, it remained light and fickle, and the challenge on Biscayne Bay was more mental than physical. But the mantra was still the same for any first day of a big regatta: minimize risk and avoid the big mistakes.

“We managed to play it conservatively and we did well,” said Sime Fantela, who races the 49er with his brother Mihovil. “We came fifth in the first race, but first in the second, so we are pleased.”

The Fantela brothers are veterans of the Olympic sailing circuit. Mihovil spent two Olympic cycles campaigning in the RS:X Windsurfer while Sime competed in three Olympic Games in the Men’s 470, finishing fourth in London 2012 and earning a gold medal at Rio 2016. They started competing in the 49er class last summer and are quickly climbing the skiff’s significant learning curve. 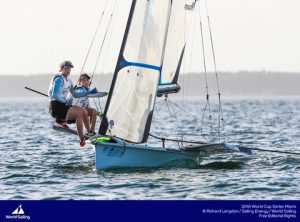 While Biscayne Bay didn’t show its best face today, the brothers are happy to be in Miami for at least two reasons.

“Miami is great, it’s enjoyable to sail here,” said Sime. “[The competition] is quite tough. All the best are here, and I think the rest of week will be challenging.”

The Nacra 17 was the only class to fit three races in. There is no separation in the top three as they are all tied on five points.

“It was long,” he said of his day. “We waited many hours for one race but it’s often like that here in Miami. Some days are good and some days you wait a long time. It was a good race in the end. It was tight, nose-to-tail for the whole fleet.” 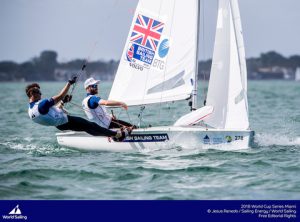 Patience and crew Chris Grube finished second, grinding from fourth after the first mark and started their regatta off on a strong note.

“Everyone on the top of the fleet are here,” he said, “so it’s going to be a tough week. But we are looking forward to it.”

The men’s and women’s Japanese 470 Japanese made a great start. Ai Kondo Yoshida and Miho Yoshioka (JPN), who sail in the women’s 470 fleet, secured their win today. The men’s Japanese 470 team, Naoki Ichino and Hasegawa Takashi, also managed to gain first place in their fleet on day one with the British team following in second.

In the Laser class, Philipp Buhl (GER) sits top after two races and is has a eight point advantage over Loïc Queyroux (FRA). The discard comes into play after three races so tomorrow’s action could see some significant shifts in the leader board.

With very light winds and a compact race schedule, the Laser Radial didn’t get a chance to race. The Finn and Men’s RS:X fleets were also unable to compete.

The Women’s RS:X sailors squeezed in a single race and yet again the Japanese managed to claim another race win. Fujiko Onishi (JPN) scored first followed by Noga Geller (ISR), and Hélène Noesmoen from France.

The Race Committee will look to catch up on races missed on Wednesday, in a bid to get back on schedule. Competition is due to commence at 11:00 local time.