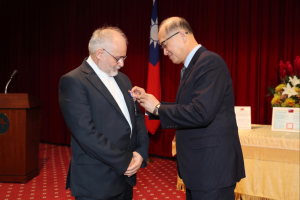 On January 24, 2018 in Taipei, Taiwan H.E. Dr. David Tawei Lee, Minister of Foreign Affairs of the Republic of China (Taiwan), awarded the Friend of Foreign Service Medal to Fr. Bruno Ciceri, who is International Director of the Apostleship of the Sea, part of the Vatican’s of the Dicastery for Promoting Integral Human Development.

The Medal was awarded to Fr. Ciceri in recognition for his outstanding contributions to strengthening the diplomatic relations between The Holy See and R.O.C. Taiwan, the Minister said.

Fr. Ciceri is a Scalabrinian Missionary who previously worked in the Philippines (1985-1996) and was the Port Chaplain and the Director of the Stella Maris centre in Kaohsiung, Taiwan from 1996 to 2008, before being called to work in the Vatican.

Last October, Fr. Ciceri organised the XXIV Apostleship of the Sea World Congress in Kaohsiung, with 250 delegates from 50 countries tackling the issue of human trafficking and forced labour in the maritime industry.

Fr. Ciceri said, “The news of this medal was a surprise and totally unexpected”. At the same time he said he; “felt privileged and honoured to be nominated by the government of Taiwan for this award”.

In accepting the Medal at a ceremony Fr. Ciceri said, “I’m accepting this medal on behalf of the hundreds of AoS chaplains and volunteers that every day in ports around the world, build bridges and destroy prejudices by welcoming seafarers and fishermen of different nationalities and religions without any discrimination, creating within the maritime industry a new order based on the principle of love, charity and solidarity”.