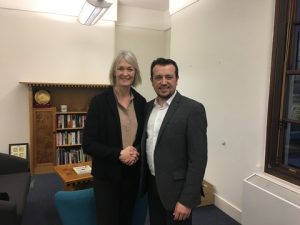 Nikos Pappas met with the Minister for Digital and the Creative Industry, Margot James, and extensively discussed digital policy issues, telecommunications and the new Greek legislation that provides significant incentives for the attraction of international audiovisual productions. During the meeting, they exchanged views regarding the development and insertion of new technologies in citizens’ lives and public administration.

Ms James showed keen interest in the presentation of the new incentives framework for the attraction of international audiovisual productions, with the establishment of the subsidy of eligible costs up to 25%. The Secretary General for Media and Communication, Lefteris Kretsos, stressed that Greece aspires to adopt one of the most attractive incentives systems, which –in combination with the obvious advantages of the country including climatic conditions and the unique landscape- will establish Greece as a significant international destination for the creation of audiovisual productions. 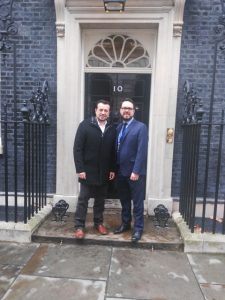 Nikos Pappas with the Head of Digital for Prime Minister’s office, Chris Hamilton, at 10 Downing Street.

Furthermore, there was extensive discussion of UK’s absolutely successful £85 million programme to subsidize the demand for superfast fibre optic broadband using for businesses. As stressed by the Greek side, Greece is ready to implement a similar action with resources from the Public Investment Programme.

The Greek delegation also underlined that investment of 60 million euros from the British company Vodafone has been recently approved by the Committee for Strategic Investments. The discussion expanded to the new investment projects in the telecommunications sector as well as to the possibilities opening with the exploitation of national and European resources, as well as the support of private investments.

The discussion also focused on the development of digital services for citizens. The Minister of Digital Policy, Telecommunications and Media, Nikos Pappas, presented the system of electronic document circulation and remote digital signature, which is already active within the Ministry and will expand throughout the public administration with a 22 million euros programme, with the bidding process opening in February.

Throughout his visit to London, Nikos Pappas was accompanied by the Secretary General for Media and Communication, Lefteris Kretsos and the Special Adviser to the Minister, Giorgos Christoforidis.