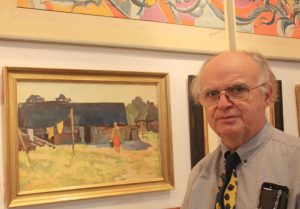 John Barkes with a work by Valentin Smirnov.

When the British art dealer John Barkes discovered a magnificent painting that had been neglected in storage in a studio in St Petersburg for nearly half a century, he feared that it would be too fragile to transport and exhibit.

It was rolled up the wrong way and folded like a blanket. The picture, completed in 1968 by one of his favourite veteran artists, Valentina Savelieva, was of the type done as a graduation piece for exacting academic tutors. It shows two young women, one in a light dress and the other in much warmer clothes and has been given the title Summer and Autumn. 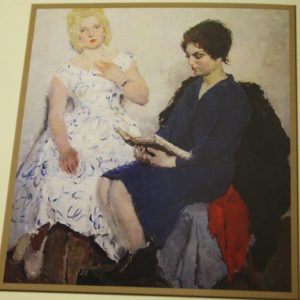 Summer and Autumn. By Valentina Savelieva.

Dr Barkes, who had often visited Ms Savelieva’s studio/apartment, located the composition behind a “forbidding” stack of abandoned official portraits and unused frames for stretching canvases.

“This canvas was so tightly rolled and so brittle that I dared not disturb it,” says Dr Barkes. The artist had not seen the painting for nearly 50 years and it had been forgotten.

The dealer nervously arranged for it to be properly stretched and framed, and was delighted when it was successfully restored locally by the chief conservator at the famed Ilya Repin Institute of Painting, Sculpture & Architecture, who laid it on a roll for transport to London.
“I was amazed to learn that the canvas did not need to be lined onto a fresh canvas,” said Dr Barkes. “The original had retained its strength, and there had been virtually no paint loss.”

At 120 cm square, it is the largest and most colourful painting in his current selection for sale of masterpieces produced by members of the Artists’ Unions in Russia, for which after a lull of some years there is growing demand.

Summer and Autumn was one of the paintings with which Ms Savelieva might have produced as she began to build her reputation. It is an enigmatic amalgam of sensitivities and seasons. A blue-eyed young woman in summer dress sits at right angles to and in sharp contrast to a book-reading companion whose outer garments have been chosen to ward off the chill of October days. In the eyes of some, it will seem to be a painting predicated on a space as much as on people. 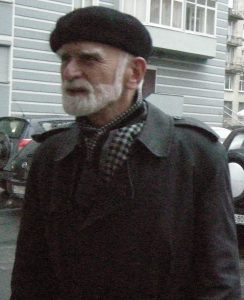 Ms Savelieva was born in 1937 in Leningrad (now St Petersburg) into an artistic family. At the Repin institute which she entered in 1958 she was a talented student, had classes with the great teacher Viktor Oreshnikov and regularly modelled for fellow students and her professor.  As demonstrated by the rescued Summer and Autumn she is a tender portraitist, often with oil paint on board.

John Barkes got to know her during his early trips to St Petersburg, Kiev and Odessa to purchase art – mostly created in Soviet days – directly from the studios of Artists’ Union members or their executors, as many of the artists have passed away in the last few years. 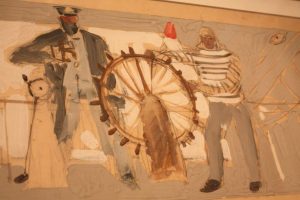 Because their styles went out of fashion, they packed away many canvases, often in higgledy-piggledy fashion. This was so with another recent find. Dr Barkes enthuses that the discovery of mosaic and mural designs in the St Petersburg studio of Evgeni Kazmin “was one of the most exciting events in my working life.” The subjects range from the White Sea, fishermen, and a yachting regatta, to musicians.

“I had been buying his paintings over a 10-year period.  The large rolls of cartridge paper jammed around and behind the stacked canvases were, I was always told, of no interest. 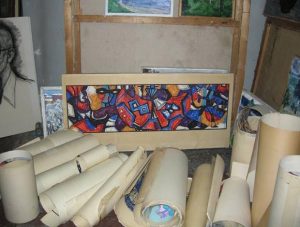 Reams of rolls in Kazmin’s studio.

“One day I cut the string on the biggest roll while the artist’s back was turned, and shortly afterwards the floor was covered by his designs, each drawn to a 1:15scale to the finished mosaic, interior mural or exterior monumental painting.”

Most of the works, mixed media and gouache and watercolour on paper, were commissioned in Sochi from about 1965 to 1975, when Kazmin was a member of the Artists’ Union there. Some of these works, “forever emblematic of the USSR,” are as much as 2.5 m in length.

Born in 1936, Kazmin studied at Rostov-on-Don Art College and was a member of Sochi Artists’ Union until 1976, when he moved to Leningrad. 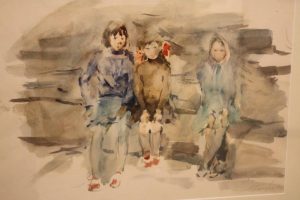 Dr Barkes has been showing his latest acquisitions this winter 2018 at the Works on Paper Fair and The Decorative Fair in London, and he will return to the capital for other events later in the year.

A charming study, in grisaille except for a plump, contented yellow fish, by Elena Gorokhova (1933-2014, St Petersburg) is entitled Sea Anemone. She graduated in 1957 from the personal studio of the much-lauded Josef Serebrany at the Ilya Repin institute. Working mainly in oil, tempera and watercolour, she painted landscapes, still life, folk lore and genre scenes, deploying allegory and symbolism. 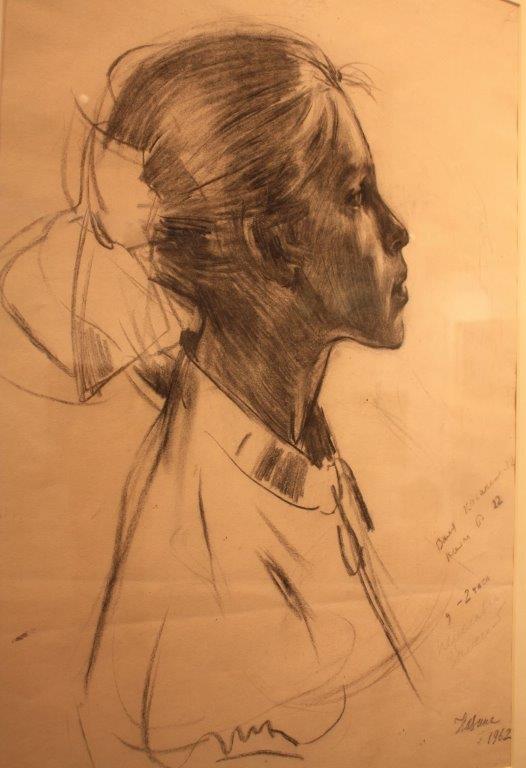 A charcoal Sketch for White Nights is by Vera Nazina, who was born in St Petersburg in 1931. At the age of 16 she enrolled in the ceramics department of the School of Art & Industry in Leningrad, moving three years later to the faculty of monumental and decorative painting and graduating in 1955. She often travelled to Karelia and the Arkhangelsk region for inspiration, and her career has featured portraits, genre paintings, interiors, landscapes, still life and life sketches, mostly in tempera and watercolour. 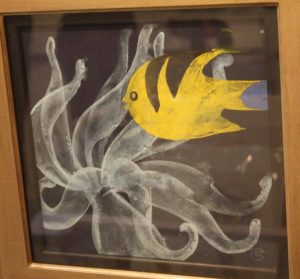 She loves the way of life of the Russian countryside, as did Valentin Smirnov (1923-2012), an example of whose work in oil on paper is a village scene, Summer, which is captivating in its warmth and seeming simplicity.

The rustic theme arouses sympathy too in Saniya Bakhtiyarova, who was born in 1949 in St Petersburg, as with her Village Girl, in watercolour.  She graduated in 1969 with distinction from the Leningrad Artistic and Pedagogical School, and in 1976 from the Repin Institute. Saniya has been welcomed at exhibitions in Japan, Poland, Finland and France.

Making dramatic use of perspective is a sombre 1960 watercolour scene of a funeral for a Naval Hero by Vladimir Ippolytov, active in Leningrad. 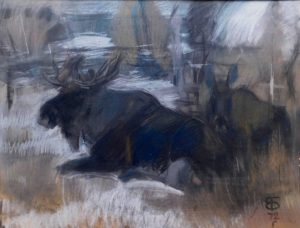 A pastel study drawn in 1972 of an elk is by Veniamin Belyshev, a well-known Moscow-based artist and book illustrator.

Kiev has become an excellent source of paintings from the 1960s and 1970s, from the brilliant generation born 70, 80 and 90 years ago. Dr Barkes has had on display small gouaches of factory workers painted in the 1970s in Kiev by Aleksei Solodovnikov (1928-2017). 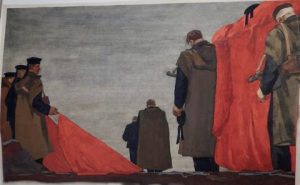 Produced more recently, from 2007 and 2010, are gouaches of everyday figures by Aron Zinshtein, a prominent St Petersburg artist. He was born in 1947 in the Urals industrial centre of Nizhny Tagil where he entered that that city’s art school before moving to the Mukhina Art School, Leningrad. After graduation, he worked in the construction sector on design for interiors for public buildings and offices. He is noted for his etchings, linocuts and illustrations for works by Shakespeare, Dostoyevsky and the poet and musician Bulat Okudzhava, and for people observed in their daily life.

Dr Barkes is commended for playing a leading role in celebrating the artistic legacy of talented creators who in general were favoured under the Soviet system, but who were left behind by the sweeping tide of the market economy – there was no art market for decades in the Russian sphere of influence. 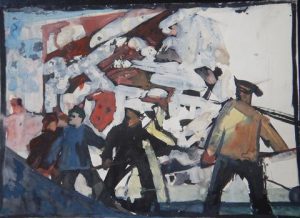 The artists in some instances laboured for months on a single composition, and far from being propaganda stooges these men and women developed their individualism. There is a wide gulf between the canvases produced in the studios of members of the artists’ unions and much of the work with a political purpose recently on display in Russian Revolution anniversary exhibitions at Tate Modern and the Royal Academy.

The period needs, from the point of view of quality achieved in studio visual art, to be reassessed. Daily life behind the Iron Curtain was a story at various times of purges, persecution and privation, but domestic routine and sports and festive occasions have been chronicled touchingly and brilliantly by the artists now at last receiving international recognition. The conversation has moved through summer and autumn to a late spring. 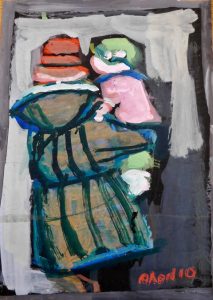 A gouache by Aron Zinshtein.

Well done Johnny for finding these lovely works. Such a shame they lay undiscovered and to think of the work just pushed aside, created by very sensitive and talented artists. You have done something important for the world of art and the precious individuals who create it. Bon courage, aye Lorna