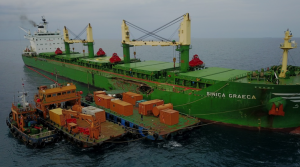 Viewes can read herebelow the latest international activities and see relevant photos from the Tsavliris Salvage: 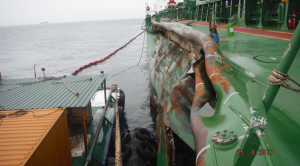 Another view from the Sinica Graeca’s collision –

The collision caused significant damages to the starboard side of the “SINICA GRAECA”, by way of cargo hold No. 2. As a result of the damage, FOT No. 2 was breached and the fuel oil spilled both into the sea and into cargo hold No. 2. Moreover, 4,274 tonnes cargo spilled (or were washed out) into the sea.
The deformed area on the side shell in way of the cargo hold No. 2 stbd side extended from frame 165 up to frame 195 and from the main deck level down to the bilge plate. The gaping hole in the middle of the deformed area was over 100 m2 metres.
Salvors appointed agents along with subcontractors (Singapore Salvage Engineering) who provided salvage and antipollution equipment, crafts, divers and man power.

On 21 August, mobilisation of a local oil spill emergency response team, equipment and man power commenced as well as a salvage team from Greece and Holland. On 23 August, the salvage team boarded the casualty. Ocean oil booms were deployed/secured around the casualty and underwater inspection by divers and cleaning operations commenced.

Due to the extent of the damage the vessel required full cargo discharge in sheltered waters. By 10 September, the vessel was clean and the patch and slosh guard were in place so that casualty was ready for transit to shelter. Salvors requested and received formal permission from MPA Singapore to shift the casualty from her actual position to the Raffles Reserve anchorage.

On 21 September cargo receiving vessel “AMERICA GRAECA” was fixed by Contractors with ETA Singapore on 24 September. On 25 September, the casualty escorted by T/B “POSH HUSKY” commenced the transit to Singapore. The vessel anchored at Raffles Reserve anchorage and works to place the oil booms commenced. On 5 October, cargo discharge to cargo barges commenced initially from cargo hold No. 2 in order to relieve the damaged area from stresses. Discharging of sound and contaminated cargo from “SINICA GRAECA” was loaded onto barges and thence loaded onto “AMERICA GRAECA”. On 21 October the cargo discharge operation was completed. On 24 October the “SINICA GRAECA” was safely moored alongside a floating dock at the Pax Ocean shipyard premises. On the same day, the cargo transfer from barges onto “AMERICA GRAECA” was completed. On 25 October 2017 the operation was completed successfully.The entire salvage operation lasted 68 days. 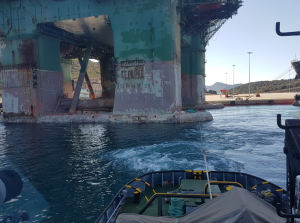 On 20 November 2017, the semi-submersible drilling rig “EIRIK RAUDE” (GT 36,898) whilst laid up at Platygiali terminal – Astakos Port, Greece, broke loose from her moorings due to very strong winds. The platform drifted from berth No.2 to berth No.6, causing damage to fenders and collided with boat “ALKYON” and pilot boat “PILOT I”.
Tsavliris tug boats “HERMES” and “HERMES I” mobilised from Patras, Greece, and upon arrival provided stand by services. On 22 November the tugs connected and shifted the platform back to her berth No.2 thus completing the operation.
Bulk Carrier “DELFA” 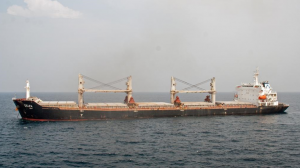 On 4 December 2017, the Bulk Carrier “DELFA”, immobilised due to camshaft problem about 700 miles north-west of Colombo, Sri Lanka, whilst en route from Chernomorsk, Ukraine to Magla, Bangladesh. The vessel was laden with about 50,000 tonnes of bulk wheat.
On 7 December, the AHT “SALVANGUARD” was molilised from Colombo to the casualty. The weather conditions were unfavourable due to the passing cyclone (tropical storm “Ockhi”) about 400 miles from the casualty’s location. During the cyclone, both Masters were in direct contact. On 7 December, the tug arrived at the casualty’s position and berthed alongside the vessel.
The tug’s team boarded the casualty, established towage connection and commenced towage to Galle to disembark armed guards and thence to final destination, Colombo, Sri Lanka.
On 11 December the convoy arrived at Galle where the armed guards disembarked and the convoy resumed towage to Colombo.
On 12 December, the convoy arrived at Colombo and the “DELFA” (with the assistance of the AHT “SALVANGUARD”) anchored at a position indicated by port authorities. All towing gear was recovered and the tug was released.

On 20 December 2017, the cape size Bulk Carrier “MARIA A.ANGELICOUSSIS” (GT 86,201 – DWT 169,000) fully laden with iron ore became disabled about 15 miles off Taiwan east coast.
On the same day, the tug “SALVAGE ACE” (9,000 BHP – 110 TBP) was mobilised from her salvage station at Kaohsiung towards the casualty (by then only 6 miles off coast).On 21 December, the tug arrived at casualty’s position and despite unfavourable weather conditions, established tow connection and commenced towage. The convoy arrived safely at Kaohsiung roads and with the assistance of the salvage tug, anchored at anchorage No.1. Later in the day, the operation was completed and the “SALVAGE ACE” was released. 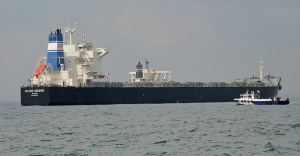 On 22 December 2017, the Bulk Carrier “IOLCOS GENESIS” (DWT 46,000 – GT 34,062) partly laden with maize, immobilised due to main engine failure approximately 43 miles west-north-west of Kaohsiung, Taiwan.
The same day the salvage tug “SALVAGE ACE” (BHP 9,000 – 110 TBP) was mobilised from her salvage station at Kaohsiung and arrived at the casualty’s position the next morning. Tow line connection was established and towage to Kaohsiung commenced. On 23 December, the convoy safely arrived at Kaohsiung roads and anchored at anchorage No.1 while the tug provided standby services. On 24 December the “IOLCOS GENESIS”, escorted by “SALVAGE ACE”, sailed from Kaohsiung to Taichung, Taiwan and arrived at destination on 26 December. On 28 December the operation was completed and the tug was released. 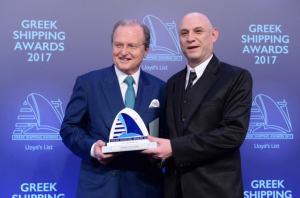 Tsavliris Salvage sponsored for the 13th consecutive year the Lloyd’s List Greek Shipping Awards which were presented at a successful dinner event on Friday 24 November 2017 at the Athenaeum InterContinental Hotel in Athens.
The “Seafarer of the Year” Award is one which Tsavliris Salvage Group is honoured and proud to sponsor. George A. Tsavliris presented the “Seafarer of the Year” Award to Captain Iakovos Papageorgiou Daniil, a Master of 15 years experience, who rescued a shipwrecked crew of eight in the Indian Ocean in June 2016 when in command of the Diana Containerships-owned vessel ‘Hamburg’ en route to Singapore. Lloyd’s List once again held an im-pressive event attended by a record 1,200 shipping personalities, executives and guests. The Awards are held annually to recognise and reward achieve-ment and meritorious services in the Greek shipping industry as well as to promote Greece’s status as a maritime centre. 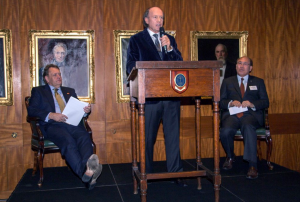 From the Christams party; Andreas A. Tsavliis speaking to guests; to his left British Minister of State for Transport, Legislation and Maritime, Mr John Hayes. To his right Mr Kitack Lim, IMO’s Secretary-General

Tsavliris Salvage Group held their 30th Christmas Cocktail Reception at the Royal Thames Yacht Club (RTYC) in London, on 12 December 2017.
With about 350 key players from all sectors of the shipping industry attending, the annual event has become a highlight of the Christmas calendar in Lon-don.
This year, Tsavliris were honoured with the presence of the British Minister of State for Transport, Legislation and Maritime, Mr John Hayes, and the Secre-tary General of the International Maritime Organisation, Mr Kitack Lim who both spoke pertinently about shipping and the salvage industry.
Mr Andreas A. Tsavliris addressed the impressive gathering of guests, wel-coming and thanking them for their kind support over the years. He stressed the importance of this year’s reception, as it was the 30th anniversary in host-ing this event at the prestigious RTYC. 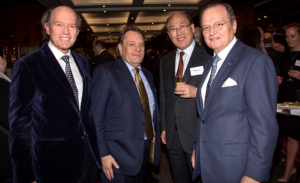 In his speech, Mr A.Tsavliris explained that 2017 was a successful year for Tsavliris Salvage despite the difficulties in the market. He called upon the oth-er salvage companies and industry to support and protect the original LOF which is in decline and to refrain from signing side letters and making other amendments to the LOF which is against the spirit and meaning of the con-tract. He also mentioned how the environment is of great concern and im-portance to their company and all the problems which might arise when deal-ing with mega ships casualties in different parts of the world.
Minister John Hayes congratulated Tsavliris for their great contribution in the salvage industry and the environment for over half a century. He assured the audience that Brexit will not affect the city of London which will remain at the heart of the maritime world. He promised to help the country to regain the strength in its British flag.
The Secretary General of the International Maritime Organisation, Mr Kitack Lim, said that the salvage industry serves the IMO environmental objectives and will always be a key component of the maritime sector. 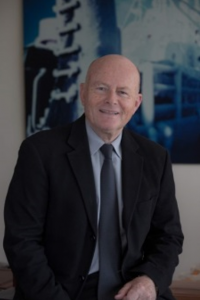 Nicolas A. Tsavliris, new Chairman of the Hellenic-American Educational Foundation

On 17 October 2017, Mr Nicolas A. Tsavliris was elected Chairman of the Hellenic-American Educational Foundation (Athens College), the largest and most prestigious school in Greece. Mr Tsavliris is a graduate (1966) of Ath-ens College and was Vice-President/Treasurer of the school until recently.

Athens College was founded in 1925 by a group of visionary Greeks with the support of American philhellenes. The 5,000 students and 1,000 teachers/staff are divided among its two campuses: in Psychico and in Kantza, Attica. In addition, an adult education program enrolls 2,000 students. 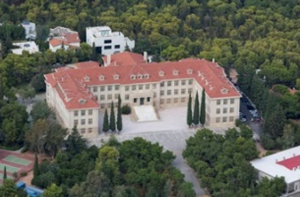 An aerial view of the he Hellenic-American Educational Foundation (Athens College),

Both campuses belong to the Hellenic-American Educational Foundation, a non-profit organization with an annual turnover in the order of $100,000,000.