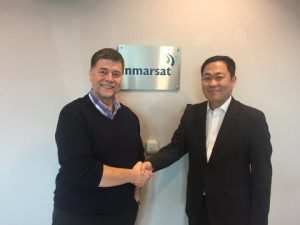 14 February, 2018: Inmarsat and Intellian have today signed an outline agreement that will support major enhancements to Inmarsat’s FleetBroadband service for the next decade and beyond.

The new agreement will see Intellian design and manufacture a new generation of FleetBroadband terminals that will support the existing I-4 network alongside the major advances coming with Inmarsat’s sixth generation satellite constellation, the first of which is scheduled for launch in 2020.  The next generation terminals will be significantly lower cost and feature a host of new capabilities, including much faster throughput speeds.

Ronald Spithout, President of Inmarsat Maritime, said:  “Inmarsat has maintained its leadership position for many decades by understanding the maritime industry and focusing our resources on continual innovation.  As we approach the next stage of FleetBroadband’s evolution, we are excited to have partner such as Intellian with a justified reputation for flexible, high quality terminals that are manufactured in the most cost-efficient manner.  We selected Intellian for this project also because their spirit of innovation and passion.

“It is also important to note that along with lower cost hardware and supercharged capabilities, the next generation of FleetBroadband, with the latest core module technology, will provide not just GMDSS but enhanced safety services; continuing to keep seafarers safe wherever they are in the world.”

Eric Sung, CEO of Intellian, said: “FleetBroadband has been a market leader for over a decade.  We are delighted to be working closely with Inmarsat on the ground-breaking enhancements that will be delivered through the Inmarsat-6 satellite constellation. Supported by a portfolio of the most advanced terminals in the world, the new capabilities of FleetBroadband will maintain Inmarsat’s leading position in L-band services in the maritime industry.”

Inmarsat’s sixth generation (Inmarsat-6) satellite constellation will be the first to feature dual-payload satellites, each supporting L-band and Ka-band services. The I-6 satellites will deliver a step change in the capacity of Inmarsat’s L-band services, supporting a new generation of capabilities – from advanced global safety services and very low cost mobile services to Internet of Things (IoT) applications.