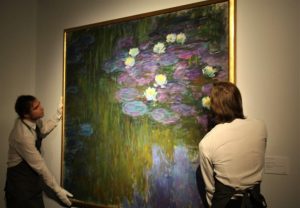 Art treasures from the vast private collection of Peggy and David Rockefeller, a collection that was founded on the profits of high finance and Big Oil over a century and a half, have gone on display in London, ahead of being auctioned.

The display, in the West End until March 8, 2018, is part of a global tour of some of the 1,500 lots for what is described as the biggest philanthropic sale of its kind, to take place in May 2018 at Christie’s auction rooms, appropriately housed in the Rockefeller Center off Fifth Avenue in New York City.

The sale will be in accord with the late David Rockefeller’s pledge to direct most of his wealth to philanthropy and provide for cultural, educational, medical, and environmental causes long supported by him and his wife. 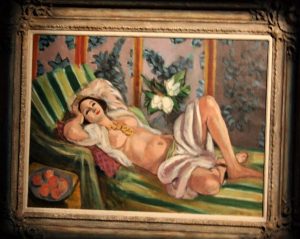 Accumulated during the couple’s 56-year marriage, the collection is expected to fetch around $600m, and it has been speculated that the final total could get close to $1bn. Even the lower figure would be the most achieved at Christie’s by the sale of a single collection.

The couple were the third generation of the Rockefeller dynasty, one of the biggest names in US and global commerce, culture and politics. Their rise began with John Davison Rockefeller, who became the world’s richest man after founding Standard Oil in 1870, fuelling the era of cheap energy, massive refineries, pipelines and ocean tanker trades. The corporation became so powerful that it was in 1911 broken up by anti-trust order. ExxonMobil and Chevron are among several enterprises that trace their lineage to Standard Oil.

Rockefeller companies provided a quarter of the oil requirements of the Allies during World War I, leading the British statesman Lord Curzon to declare in 1918 that the cause had floated to victory upon a wave of oil.

As was the case with other business moguls, in a tradition that has been picked up by 21st century tech industry billionaires, John D Rockefeller gave away much of his fortune, donating substantial sums to medical research and universities. 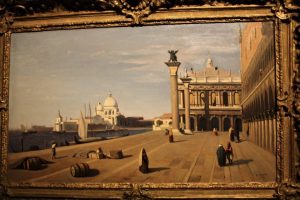 Despite losing much of their fortune in the Wall Street crash of 1929, the family had money to spare and the name Rockefeller continued to symbolise wealth, influence and philanthropy. John D Rockefeller Jr pursued business and charitable interests, and his children enjoyed ongoing success on both fronts. David revitalised Chase Manhattan bank and became its chairman, and Nelson served as vice-president under Gerald Ford.

Peggy died in 1996. Before David passed away In March 2017 at the age of 101, he arranged for their collection to be sold for the benefit of society, stipulating that proceeds should go to 10 causes, including the Museum of Modern Art (MoMA) in Manhattan.

It is this roster that is expected to help the auction beat the record for a single-owner collection set by the Yves Saint Laurent et Pierre Bergé sale in 2009 in Paris which achieved $443m.

Some of the artworks were handed down from previous generations, and others were bought by David and Peggy. Besides much resplendent Impressionist, Post-Impressionist, American and Asian art, there is English and European decorative art and furniture, and Chinese, Japanese, Korean and European ceramics. 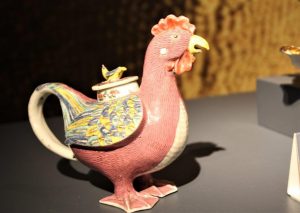 Three works are certain to command especially steep prices. Picasso’s 1905 rose period Fillette à la corbeille fleurie an evocation of bohemian life at the turn of the 20th century, hung in the library of the East 65th Street New York townhouse of the Rockefellers for half a century. It could fetch $70m. The painting was first purchased by Gertrude Stein and her brother, Leo, as they were starting to build their renowned collection. In 1968 David Rockefeller formed a group of collectors to acquire the Gertrude Stein collection.

Estimated to sell for $50m is Odalisque coucheìe aux magnolias painted by Matisse in Nice in 1923. This would break the Matisse record of $41.1m achieved when Les coucous, tapis bleu et rose (1911) was sold from the Yves Saint Laurent auction.

Odalisque is the highest estimated work by Matisse to be offered at auction. It hung in the living room of Peggy and David’s Hudson Pines country house in Westchester, New York state.

The painting illustrates Matisse’s use of textiles, fruit and flowers as part of an overall composition. The “odalisque” is Henriette Darricarrère, his main model from 1920–27. Tall and dark-haired, at the age of 19 she caught the painter’s eye while she was taking the part of a ballerina in a film studio. He appreciated her dignified posture and the way her body caught the light like a sculpture, finding her perfect for sensual poses in Western notions of Arabian costume. 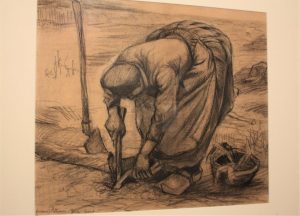 The impressively large Nympheìas en fleur executed during the Great War by Monet (1840-1926) is estimated to sell for $35m. It was bought by the Rockefellers from the Paris dealer Katia Granoff after being introduced by MoMA’s founding director, Alfred Barr. The painting is said to reflect Monet’s anticipation of abstraction in modern art, but despite such importance its fate was for years to be locked away in a barn at Monet’s beloved garden of Giverny.

Among other highlights is Venise vue du Quai des Esclavons, done in oil on canvas by Jean-Baptiste-Camille Corot (1796-1875). This work is estimated at $5m to $7m.

Vincent van Gogh (1853-1890) is represented by Planteuse de betteraves drawn in black chalk on paper. It is from the summer of 1885 during which van Gogh studied the human figure by drawing farm workers.

A dramatic work from Paul Gauguin (1848–1903) is La Vague. This oil on canvas is from 1888, and the price is foreseen at between $7m and $10m. It is possibly inspired by Japanese prints – the name of the painting is borrowed from Hokusai (1760-1849) whose best-known work is The Great Wave. On a vivid orange beach of Brittany, two retreating swimmers in Victorian bathing costume give a sense of perspective, making it clear that the dark rocks jutting from the bay are massive outcrops. 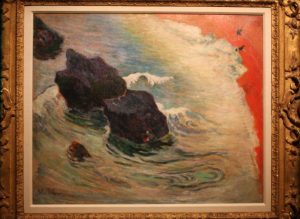 Ceramics include such items as a Chinese export famille rose coloured wine pot and cover in the form of a cockerel. This 19 cm wide piece is from the 18th century Quianlong period. It is dated around 1740 and is estimated at $8,000 to $12,000.

The auction will dispose of 67 dinner services from which guests dined with the Rockefellers at their home in Manhattan. David’s mother’s love of such sets inspired him to add to her collection. Included is a section of Napoleon’s Sèvres porcelain dessert service, valued at $150,000-$250,000 and which the defeated leader took with him in 1814 from the palace of Fontainebleu, here he informed the Empress Josephine that he was divorcing her, into exile on the island of Elba. It has an iron-red and sky-blue ground, painted with butterflies, bees and other insects.

David’s mother, Abby Aldrich Rockefeller, intrigued by the 1913 Armory Show which brought ‘outrageous’ European artists to New York, began to acquire contemporary art, to the chagrin of her husband who disliked it and was reluctant to have it in the house.

Abby had a small gallery built on the seventh floor and began to present exhibitions of borrowed works alongside her own, and then with her friends Lillie P Bliss and Mrs Cornelius J Sullivan took a decisive step further.

In the late 1920s the trio launched what they believed would be the first museum devoted purely to contemporary art. David Rockefeller, then a schoolboy, sat in at many of their planning meetings, as did a Harvard graduate, Alfred Barr Jr, who was teaching what was probably the first course in the US on modern art. Barr became, at the age of 27, the first director of the Museum of Modern Art, established by the three women.

The Rockefeller clan’s projects and interventions changed the architecture and morale of New York. Although John D Rockefeller Jr spent most of his life engaged in philanthropy, his single, defining business venture was the creation of the “city within a city” as the Rockefeller Center was known. Constructed during the Great Depression, it officially opened in May 1933.

David led the rescue of the city from near-bankruptcy in 1973 and he facilitated the building of the World Trade Center, only to watch from the 56th floor of Rockefeller Center its destruction on 9/11.

During his career with Chase, David visited London 37 times. Under his guidance in the 1970s the institution greatly expanded its role in merchant banking in the UK.

The New York auction will comprise 900 lots across live auctions, from May 7-11, and 600 lots online.

There has already been a preview in Hong Kong. After being on show at Christie’s King Street premises in London until March 8, the preview will travel to Paris, Beijing, Shanghai and Los Angeles before returning to New York. It is the first time that Christie’s have launched a sale of this type in Asia, but unsurprising given that 35% of the house’s sales are now in that geography.

Proceeds from the sale will benefit selected charities and non-profit organisations that Peggy and David supported. These include the Museum of Modern Art; Rockefeller University, a medical-research school started by his grandfather; and Harvard University, David’s alma mater.

The donor expressed the hope that many of the works would be acquired by institutions that would give them public display, although given the cash squeeze on many museums and galleries it will be interesting to see how far that goal will be realised.