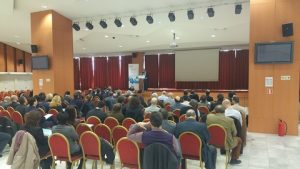 Snapshot from the audience with Panagiotis Chatziperos at the podium

“Air quality & emission measurements in ports at the forefront”

Air quality, the leading priority of European ports, was the focus of last Friday discussion, organised  by CERTH within the European co-funded project Poseidon Med II, which took place at Piraeus Port Authority, bringing together executives from the shipping and energy sectors as well as representatives from governmental bodies, local authorities and relevant associations. 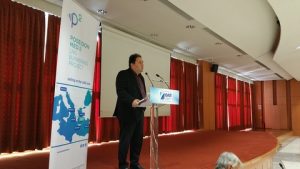 During the welcome session, the Secretary General of Ports, Port Policy and Maritime Investment (Dr Christos Lampridis) and representatives from Piraeus Municipality (S. Voidonikolas, Vice-Mayor) and Attica Region (G. Gavrilis, Piraeus Vice-Regional Governor & P. Chatziperos (Deputy Regional Governor) endorsed the efforts of Poseidon Med II, highlighting as key benefits the improvement of air quality through the use of LNG in marine transportation as well as the vital role of synergies between the port and the local community. 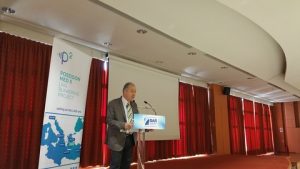 The quantification of shipping emissions in ports was the focus of the first session, in which CERTH representatives presented the latest results from emission measurements occurred in Piraeus and Patras ports in 2017, where it is evident that NOx,SOx and PM pollution is at a peak level during the manoeuvring and movement of passenger ships at arrival/departure time. 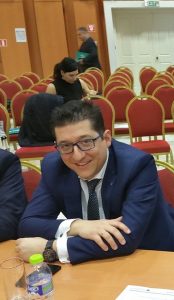 The societal impact of shipping emissions and its regulatory aspects, the key role of port authorities in tackling air pollution problem as well as the use of innovative technologies, such as the Unmanned Aerial Vehicle System for the collection of valid emissions data from ships were also analysed. Facing the upcoming regulations regarding SOx emissions, innovative technologies and alternative fuels were presented, promoting the LNG as the most promising solution towards the transition to a zero-emission era. 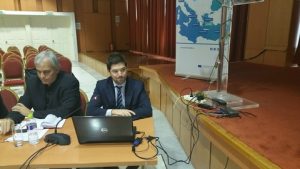 Notably interesting was the discussion of the last session, in which members of the maritime community and energy sector, EcoPorts and Hellenic Ornithological Society representatives underlined the significance of LNG as marine fuel for Eastern Mediterranean region, analysing the necessary steps towards its deployment, such as the development of supply chain, the offering of incentives to the front runners and the completion of the regulatory framework.

During the event, a live demonstration of how the “Air Quality Monitoring Station” collects emissions data in ports took place. 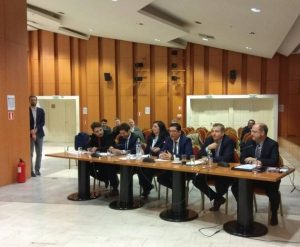 Co-financed by the European Union

N.B.: the programme of the event for viewers’ records: Piraeus Event