South Korea – a champion host for the Olympics 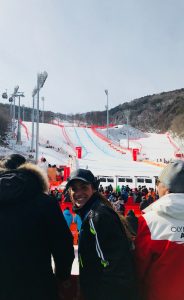 The 2018 Winter Olympics has thrust the two Koreas into the sporting and political spotlight.  Ana Delgado*, senior lawyer and diplomat and a sports enthusiast, has been at PyeongChang  and sends us this report.

For the fourth consecutive time I am attending the Olympic Games. The first I attended was in London 2012 as the Panama Ambassador to the Court of St James. What an honour to have received as ambassador the Panamanian delegation and the President of the Republic. As a former member of Panama national modern pentathlon and fencing teams, sports enthusiasm and adrenaline runs in my veins.

I have to say that PyeongChang, location in Korea for the latest Games, has really impressed me. You can feel the importance that the Seoul government has dedicated to education. The thousands of volunteers are students from all over the country who feel extremely proud to serve and welcome the heads of state attending and of course the athletes. 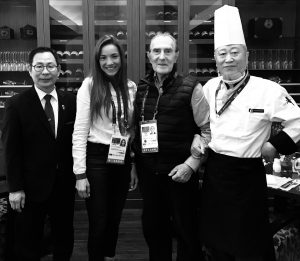 With Ivan Dibos to her right and guests

I am most impressed by the prosperity and development of South Korea, a country that in 1960 had a GDP per capita of $158, a figure which has risen to$28,000. Two Koreas, one submerged in misery, depression and under-development and the other free and prosperous. South Korea is number 29 in international rankings of human freedom.

For the first, time the two Koreas are playing in the same team and expressing the One Korea message in every stadium buoyed by North Korean cheerleaders. What a spectacle to witness!

What is South Korea’s secret of success? In my opinion, one of the main characteristics assisting the nation is the importance attached to education. As a result, in 57 years of independence, it has one of the strongest economies in the world with position number 13. 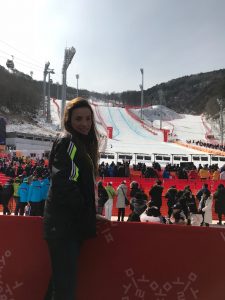 Without doubt, the industrial expansion has generated important business opportunities, and as a result, brought forward great professionals capable of doing research, high tech and innovation in all fields, including shipping, of course.

Adding the economic opening and the education, another key factor has been the validation of property of Japanese landowners after the Second World War. The strengthening and the security of private property is a vital element to generate certainty and access to credit.

In sum, South Korea is an example to follow. I feel most honoured as a Panamanian, a former Panama national team athlete to have had the opportunity to attend this Winter Games. Even though Panama does not yet have a Winter Team, we will work on having one soon!

* Ana Delgado was Panamanian Ambassador to the UK, the Republic of Ireland and Iceland from November 2011 to June 2014. During that time, she had a leading role at the International Maritime Organization.

Navigating the future of our industry has never been more interesting