Set up and preparation works on the frontal cross pieces

Niron Staal, the specialist steel machining and construction subsidiary of Damen Shipyards Group, is nearing the completion of its first major machining contract for a skyscraper project for its client Hollandia Structures, partner in the VBH structural steel joint venture. The building involved is the 225-metre, 60-storey, residential structure named the Newfoundland Tower, currently under construction in London’s Canary Wharf financial district.

What began initially with the machining of a single, precision steel plate to meet the high-level quality required by the client, has grown into a major contract for the machining of components critical to the support and integrity of the entire structure.

A key feature of the Newfoundland Tower is the use of a diagrid structure in its design, similar to that used in the nearby, award-winning, ‘Gherkin’ office tower. These diamond-shaped external steel skeletons support and brace the entire building. In the case of the Newfoundland Tower it additionally has sloped, sculpted sides to give residents more space while also offering privacy on the balconies. 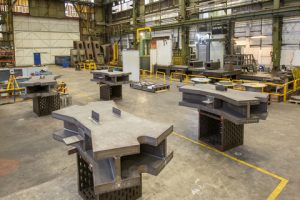 Niron Staal has been responsible for machining all the complex steel components for the diagrid structure on the front of the building, including the corner intersections, frontal cross pieces and the ­nuts that secure the main steel beams. With the height of the storeys being irregular and the load-bearing requirements of the external steelwork decreasing as the height increases, every component has had to be custom-made as the thickness of the steel plate falls. At each stage, lasers are used to calculate the distances and with that data Niron Staal machines each part to tolerances of +/- 0.2 mm.

Earlier on in the project, the company was also responsible for the machining of a series of piles that have been installed at ground level, both vertically and angled, and which are critical to the overall stability of the tower block. Forming part of the base, these weigh up to 40 tonnes each, are 16 metres in length, and transfer the loads imposed by the diagrid structure down through 60-metre deep bearing piles.

Discussions on the project began in the summer of 2016 with actual work beginning at the end of that year. The prime contractor for the steel work on the tower is VBH, a joint venture between Belgian group Victor Buyck and Dutch steel company Hollandia. VBH has unrivalled experience of working on high-rise projects in Canary Wharf and the adjacent City of London. Hollandia is responsible for the front of the building and it is they that contracted Niron Staal to undertake the fabrication of the most complex items of steelwork. The Newfoundland Tower is due for completion later in 2018.

“This is the first time that we have contributed to a high-rise building project,” says Klaas Goedhart, Production Manager Machining at Niron Staal, “but the success of this contract demonstrates that we have both the skilled workforce and the equipment required to undertake the high-precision machining of steel structures and components for any application. We look forward to undertaking more assignments of this type in the future.”

Kees Ardon at Hollandia Structures added; “The partnership with Niron Staal has worked very well. Once a schedule has been agreed we can rely on them to keep to it. The deliveries are always on time and the quality is very high; the components fit perfectly, first time, which is very important for us.”