Mistero Buffo, by Dario Fo, hosted at The Cockpit 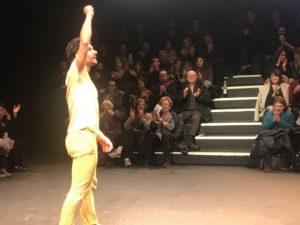 Ark4Art, continuing his stunning career at the London art scene, offered us four amazing nights last week. Always a pioneer in the presentation of Greek artists in the British capital, this time, Ark4Art invited the young, talented actor Panos Vlachos and the charismatic director Lyto Triandafyllidou, who excel abroad. Mistero Buffo, solo pièce célèbre, by the Italian Nobelist Dario Fo, was hosted in the atmospheric space of The Cockpit, Theater of Ideas for four unique performances.

The most popular and controversial spectacle of post-war Europe, was chosen by the young and talented director, Lyto Triandafyllidou, especially for performances in front of American audiences, to satirize the current American political status, as she explained at the end of the performance to the public. The show traveled to America, Israel and finally came to Great Britain, where it was the grand finale. 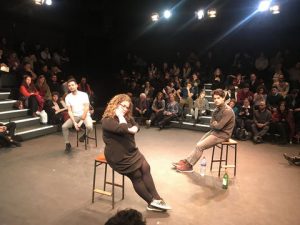 Mistero Buffo is a series of monologues with themes taken from the Bible and the life of Jesus. It is a political exploration of popular Medieval Mysteries. The texts, in extraordinary translation and editing in English by Ed Emery, are a mix of Italian dialects and grammelot. The central hero, the clown Guillare, traveling from village to village, recounts passionately,and lyrically about his allegorical stories aimed at revising the concept of Power.

Panos Vlachos manages to act as multiple different heroes who speak different dialects, within one hour, with technical ease. At the end of the show, he is exhausted by his effort after a terrifying tour de force show. He is an actor, songwriter and musician. He has studied at the New Greek Theater under Georgios Armeni and has played in theater, cinema and television. 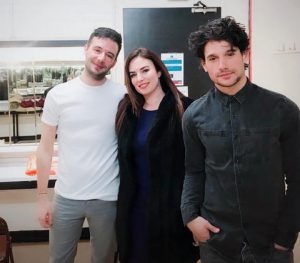 Lyto Triantafyllidou is a theatrical director based on New York. Her main interest is to create a new and authentic dialogue with our reality through the exploration and revitalization of under-represented works on the world stage.

After the performance, the actor and the director received questions from the audience.

It is worth noting that the show won the 2017 Hollywood Fringe Festival’s Encore Producers’ Award.