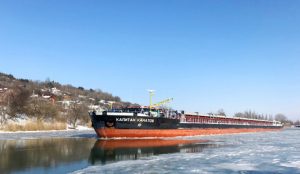 On March 2, the M/V Kapitan Kanatov set out on her first voyage having marked the beginning of the 2018 navigation season for Volga Shipping JSC (a shipping asset of UCL Holding). The ship (Project RSD44) laden with 5,200 tonnes of grain is en route from the Port of Rostov-on-Don along the Don to the Port Kavkaz. This year, Volga Shipping Company’s navigation season in the Southern Basin opened one month earlier than last year.

Under new regulations of Russian River Register, vessels of mixed sea/river M-PR class can enter the Azov Sea including the Kerch Strait as from March 1, 2018 (last year they could operate in the basin from April 1).

Volga Shipping Company has prepared the vessels involved in grain cargo transportation for an early navigation and deployed three ships of Project RSD44 and three VolgoDon max vessels that will start operation in early March.

Volga Shipping Company plans to begin this year’s shipping season on the Upper Volga in April.

Founded back in 1843, Volga Shipping Company is one of the oldest and biggest Russian inland waterways carrier transporting different types of freight on the country’s rivers, lakes and to the ports of the Sea of Azov and the Caspian Sea. In 2017, Volga Shipping transported 6.5 million tonnes of cargo.