Europe in the Family – Polish landed gentry in the 20th century 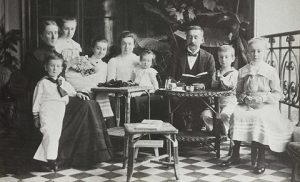 Europe in the Family – Polish landed gentry in the 20th century

Landowners without land: such has been the fate of thousands of formerly wealthy Polish individuals and aristocrats.

They were dispossessed by the harsh political blasts that swept their country and neighbouring territories during the 20th century.  Even under the liberal democracy of the past near-30 years, their pleas for a law that would allow restitution have gone unheeded by the authorities. 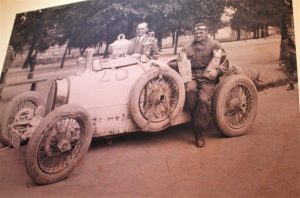 The exhibition is currently closed to the public but can be seen in glorious detail online.

Marcin Schirmer, chairman of the Warsaw-based Polish Landed Gentry Association, formally opened the London presentation of the exhibition at Ognisko at a packed private viewing on March 5, 2018.

Mr Schirmer has written extensively on Polish landowning and architecture, with particular reference to 18th to 20th century residential premises. 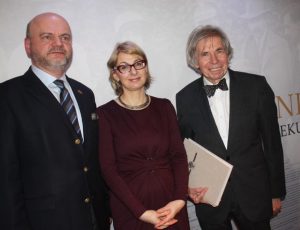 The exhibition pays tribute to a lineage which it is said for centuries constituted the backbone of Poland’s cultural economic and political life, and celebrates its Europe-wide connections.

The harsh reality in 2018 is that although families would dearly love to have their ancestral homes and acreage back, to restore and maintain their establishments, most of which have for years been dilapidated, would cost a fortune.

Peter Mlodzianowski, chairman of the Polish Landowners’ Association (Great Britain) expressed the hope that one day the manor houses which are now in ruins would be brought to the same standard as estates run in the UK by the National Trust.

Dating back to the 18th or 19th century, most of the residences were treasured for generations. More than a family nest, a manor was a symbol of the continuity and strength of Polish tradition. Almost every one of them housed valuable antiques and works of art.

Mr Mlodzianowski said that Ognisko Polskie was a “home from home” for Polish society and was the natural venue for the exhibition given its background and patronage. 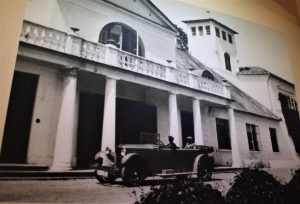 Palace in Krzesk, east-central Poland, about 1925

He said that Poland was the only post-communist country where parliament had failed to introduce a reprivatisation property law, despite that clear title to possession would psychologically encourage investment and deter corruption.

He said that the exhibition focused on the contribution of the landed gentry to the preservation of the Polish spirit during the 123-year period of partitions when Poland as a state was wiped off the map, until restored by the Treaty of Versailles. It showed the importance of this group in the fight for independence in the 18th and 19th centuries – their manor houses were centres of resistance.

Mr Mlodzianowski is a top architect of more than 40 years’ standing and has been involved in many key projects in the City and internationally, including the United Arab Emirates.

The exhibition organisers say that a traditional landed gentry family was multigenerational with many children. Education was highly valued, as was respect and care for the elders. “The value system was based on the Ten Commandments, patriotism, honour, readiness to sacrifice one’s life for the national cause, cult of ancestors, and national traditions,” reads one of the commentaries. 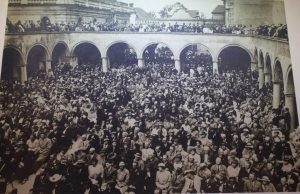 Conscious of their social prestige, the landed gentry felt particularly responsible for preserving the Polish language and culture, maintaining traditions, and developing national awareness and civic responsibility. With this ethos the landed gentry generally took on the role of social and political leaders and provided a degree of security to the population on their estates. Landed estates were economic centres in the countryside, promoting good standards of agricultural management and innovation and setting up agricultural associations.

A physical decline was already in train in the 1920s, because of the destruction of estates during World War I, the low profitability of farm production, and the economic depression of 1929-1933. In the first 20 years of independence, most political parties sought a reduction of the role of the landed gentry, calling for parcelling of land into peasant farms. Many estates were indebted and poorly managed, but the gentry won the support of strongman Józef Piłsudski who came to power in a coup. A debt restructuring Act and upturn in the economy improved the situation of landed gentry just before the outbreak of World War II, which led to the Nazis and later the Soviets wreaking havoc throughout the nation. 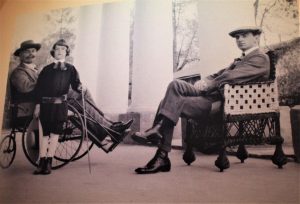 Count Stanisław Tarnowski and his sons Karol and Antoni.

Meticulously research into the achievements and fate of the strong yet ultimately vulnerable stratum of society has been organised by the Warsaw and Poznań branches of the Institute of National Remembrance (Instytut Pamieci Narodowej).

Dr Agnieszka Łuczak, head of the education bureau at the Poznań branch, said that the exhibition was in three main sections. A prologue gave background to and a definition of the landed gentry (one historian defined this class as someone owning an estate of more than 50 hectares), and a large map showed a register of property. A second section offered a collective portrait of the landowners, focusing as a typical cross-section on 12 families from various regions including small properties in territory lost to Poland in 1939.

Dr Łuczak and her colleagues have with commendable skill compiled an album for each of the dozen chosen families with photos and descriptions of the best-known members. The third part of the exhibition was an epilogue recounting the fate of families since the communist decree of expropriation of land which was touted as “land reform.” A 1944 proclamation insisted that “princes, counts and magnates will disappear” – and the social grouping was forced from the stage soon afterwards, completing the liquidation begun under Nazi conquest. 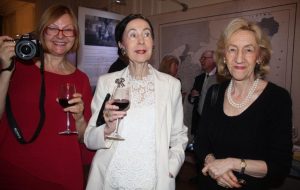 The exhibition sets out to counter the propaganda directed against this sector during the 45 years of communist rule. Over 20,000 Polish landed families were thrown off their land without compensation. “This entire sector of Polish society was deprived of a home and a means of livelihood. It was a policy designed to annihilate this social class which also led to the dispersion of many of the landed families all over the world,” says the commentary. “The exhibition however illustrates this group’s remarkable resistance to life’s hardships and its ability to adapt and maintain family ties despite territorial dispossession.”

Dr Łuczak is acclaimed for her publications on 20th century history including the deportations of Polish citizens from territories incorporated into the Third Reich, social resistance and anti-communist movements, especially concerning women, and the loss and plunder of cultural heritage. 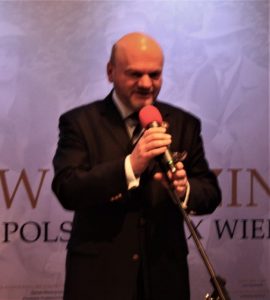 Men and women of renown from the class under the new spotlight have included leading composer Witold Lutosławski (1913-94), the painter Józef Czapski (1896–1993), novelist and playwright Witold Gombrowicz(1904–1969), and Polish underground fighter Witold Pilecki (1901–1948) who infiltrated Auschwitz to send out reports of concentration camp conditions but was executed by the Stalinist security service.

The chairman of the Polish Hearth Club, Nicholas Kelsey, spoke at the reception of the widespread repurposing and abandonment of properties. “This exhibition is fascinating, tinged with sadness, but it is a story that should be told,” he said. His personal heart-rending experience was visiting with his wife her family’s former property on the other side of the modern Polish border which had been transformed into the headquarters of the Ukraine forestry service.

Among impressive period photos in the show is one showing proud motorists Antoni Potocki, long-standing president of the Cracow Automobile Club (Krakowski Klub Automobilowy) established in 1926, and Jan Ripper, a competitor in the International Tatra Race, and son of Wilhelm Ripper, a pioneer of motorsports in Poland.

We see a mighty crowd at the first convention of the Landowners’ Association in 1937 at Jasna Góra Monastery in Częstochowa, a place of pilgrimage. 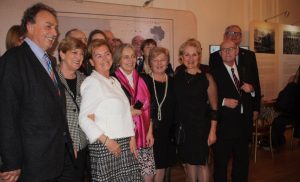 A section of guests pose for a photo.

An example of mansions at their finest is the palace in Krzesk, east-central Poland, as seen in a photo from around 1925. This was the estate of Zygmunt Ścibor-Marchocki from 1877-1940.

Representing the fostering of education, Count Stanisław Tarnowski (1837-1917) is seen with his sons Karol (in armchair) and Antoni, at Ropa Gorlice county, Małopolskie, southern Poland, in about 1912.

Dating from about 1902 is a picture of the Czapski family (Józefa, Stanisław, Karolina, Elżbieta, Leopoldyna, Róża, Jerzy, Józef, Maria) which originates from Gdańsk Pomerania and by dowry received considerable property in the Minsk area. Count Emeryk Hutten-Czapski was a numismatist and established the basis for the first scholarly study in Poland of collected engravings. Chafing at the rule of Tsar Alexander III, he moved to Kraków where before his death in 1896 he initiated a private museum which was to be the forerunner of the national museum in that city.

Among guests at the private view were (in our photo) distinguished journalist and photographer Tatiana Falewicz; London ceramicist Elżbieta Stanhope; and Malgosia, Lady Belhaven and Stenton, a leading organiser at Ognisko.

The exhibition was previously displayed at the Royal Castle in Warsaw, the Polish Senate, in Szczecin, Wrocław and Vilnius, and the tour may be extended to Paris.

It can be seen online in English at http://ziemianie.pamiec.pl/en.html

The BDI@1,212 poses many question marks… geopolitics too…