Seventy years to the day since the treaty establishing IMO was adopted, Her Majesty Queen Elizabeth II marked the occasion at IMO Headquarters in London

Seventy years to the day since the treaty establishing the United Nations International Maritime Organization (IMO) was adopted, Her Majesty Queen Elizabeth II marked the occasion at IMO Headquarters in London on Tuesday (6 March).

Accompanied by IMO Secretary-General Kitack Lim, Her Majesty Queen Elizabeth II unveiled a commemorative plaque and cut an anniversary cake. Her Majesty also met some of the guests attending the event, including representatives of IMO Member States, inter-governmental and international non-governmental organizations, and IMO Secretariat staff. 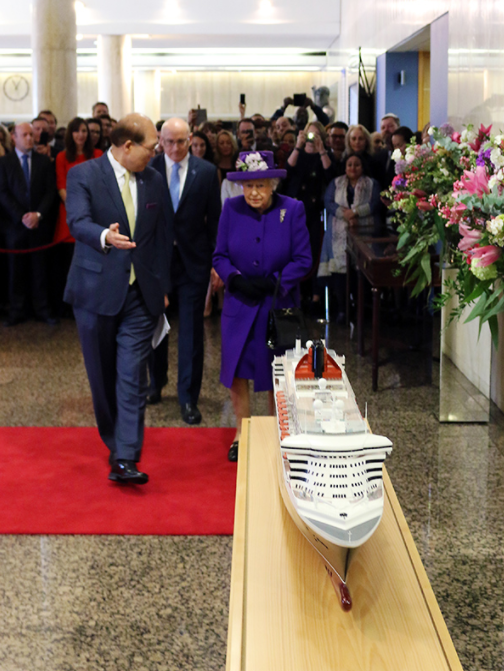 “We are celebrating 70 years of achievement, in which the truly vital industry of shipping has become safer, cleaner and greener, thanks to the work of IMO. We are also looking ahead to the exciting new challenges on the horizon,” said IMO Secretary-General Lim.

“Billions of ordinary people, all over the world, rely on shipping every day of their lives – even if they don’t realise it or understand it. It is our role to ensure shipping can continue to make this vital contribution to global well-being,” Mr Lim added.

The Convention on the International Maritime Organization (IMO) was adopted on 6 March 1948 at the United Nations Maritime Conference held in Geneva, Switzerland. The convention entered into force 10 years later, on 17 March 1958, when the 21st State ratified the treaty. IMO’s first meeting was held in London on 6 January 1959, at Church House in central London.

Since then, IMO Member States have pursued their mission to develop the global regulatory framework for international shipping.

Today, IMO continues its work to improve maritime safety and security, the efficiency of navigation and the prevention and control of pollution from ships, as well as the fair and effective implementation of its regulations.

___
IMO – the International Maritime Organization – is the United Nations specialized agency with responsibility for the safety and security of shipping and the prevention of pollution by ships.

The IMO Headquarters building, located on London’s Albert Embankment on the south bank of the River Thames, was purpose-built by the United Kingdom Government for the Organization during the 1970s, with its foundation stone laid by His Royal Highness The Duke of Edinburgh, in 1979. The building was formally opened in 1983 by Her Majesty Queen Elizabeth II. The Queen’s cousin, His Royal Highness The Duke of Gloucester re opened the building in 2008 following a major refurbishment.

The 6 March 2018 event was attended by representatives of IMO Member States, inter-governmental and international non-governmental organizations, and IMO Secretariat staff.

Highlights of the first ELEMED conference of shipping electrification