A full house attending the conference

The Swiss tunnel of Monte Ceneri will start operating in December 2020 thus reducing train transit time between Lugano and Zurich (through the Gotthard tunnel): from 2.15 hours to one hour and 40 minutes. The Terzo Valico between Milan and Genoa is expected to be completed in 2021; the Milan-Lugano train project (22 minutes) that will be approved in short medium run will last from 7 to 9 years to be realized..

These are the most important indications that emerged from the conference hold today in Lugano, then confirmed that the time is ripe for a marked change of course in continental transport on the North-South axis with strategic consequences  for the ports of Genoa and Savona. 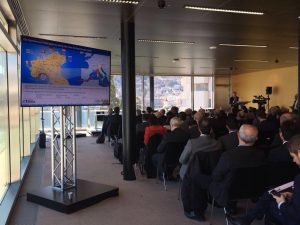 Another view from the conference

The Authority of the Western Ligurian Harbour System, reaffirmed the timescales of new infrastructures in the ports of Genoa and Savona, for total public and private investments (including the new dam) that will exceed 2 billion, and highlighted pinpoints of a detailed plan aimed at recovering efficiency in freight rail transport, with the possibility of implementing  750 meters long trains.

This is the signal that emerged, loud and clear, from the meeting hold today in Lugano and organized by the Port System Authority of Genoa and Savona. A meeting that revealed the  steps of this process, which is up to provoke a real revolution.

And not by chance, the conference was sponsored by the Swiss Embassy in Italy and by the Italian Embassy in Switzerland, with a participation in the convention in Lugano that  provided the best evidence of a specific interest also of Swiss companies to return to experience the efficiency of the Ligurian port system.

Paolo Signorini emphasized that “there are already today all the possibilities to recover competitiveness through the newly tested efficiency standards of port and railways services. Signorini pointed out that new port investments will allow the large container ships to dock and that public bodies and private operators are expected to invest more than 2 billions euro.

During the Lugano Conference, the European Commissioner for the Rhine-Alpes Corridor, Pawel Wojciechowski, stressed that this corridor is an absolute priority for Europe.

Giovanni Toti, President of the Region of Liguria, concluded the work, confirming that “the Ligurian port system is the most important and therefore a fundamental asset for the whole of Europe”. Ligurian ports are a key pawn in the development of the entire continent.

Market dives further; there is hope though for the very very very few…