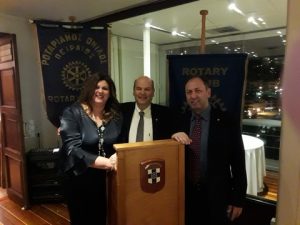 With great success a joint celebration of the day of 25th March 1821, which marked the start of the Greek war of independence against the Ottoman Empire, took place at the Nautical Club of Greece. The Chios Sextant Rotary Club and Piraeus Rotary Club got together on 17th March 2018 for the event.

Invited speaker of the night was the historian – registrar and Administrator of the National State Archive and the Historical Registry of Hydra, Konstantina Adamopoulou. On the topic of “Hellenic merchant marine, the genesis, the evolution and the contribution to the National sea struggle of 1821”.

The speaker scientifically, vividly and sufficiently expounded on the subject addressing the contribution of the merchant marine to the Hellenic revolution and the struggle of Greeks.

The Piraeus Rotary club in appreciation appointed Mrs. Adamopoulou an honorary member of the Club.

The celebration proved extremely successful under the guidance of president-elect of Chios Rotary Club Polikseni Akavalos. The presence of over 80 persons made for a great atmosphere, the positive energy of all, and mainly the interesting lecture that journeyed over the heroic years of the Greek revolution, all created what might be called good vibes between the rotary members and their guests.

The guests had the chance to taste mastiha courtesy of the Chian  Giannis Mandalas, director of Medittera S.A. and Mastiha Shop.

The event ended with the greeting of Chios Rotary president Mr. Kerkentzes, highlighting Rotary representation in Chios and thanking the speaker, the special Rotarian guests and friends of the Rotary Foundation.

Reflecting the Rotary principles, revenue from the event was given to the  organisation Ark of the World, for Father Antonios for the great work that he undertakes.