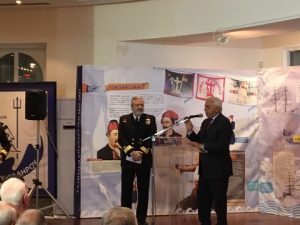 The Mayor of Paleon Faliron, Radm (HN) Dionissis Hatzidakis, introducing the event; next to him is Commodore (HN) Leonidas Tsiantoulas, head of the Naval History Agency of the Hellenic Navy

A very unique exhibition relating to the history of the Hellenic Navy  – between the years 1821 to 1945, took place at  Paleon Faliron’s events centre “Flisvos” in the southern coast of Athens. At this private view, with over 150 guests attending, it was a rare chance for the public to see unique documents and pictures complemented with the “a picture is worth a thousand words” maxim!

After the introduction of the event by the Mayor of Paleon Faliron, Commodore (HN) Leonidas Tsiantoulas explained the importance of the event and its meaning to present and future generations. Lieutenant  (HN) Panagiotis Gerontas guided guests around. 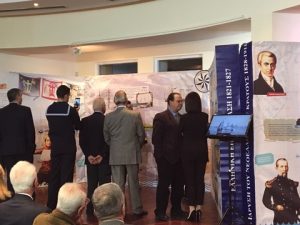 A very well organised event by the Naval History Agency of the Hellenic Navy and it was good talking to some retired navy officers. There was also a sales stand so guests could buy interesting historic books with the history of the Greece’s Navy. Excellent!

The event was indeed the preamble of Greece’s Independence Day, the 197th Anniversary of the 25th of March 1821!

We will revert with a full report soon.