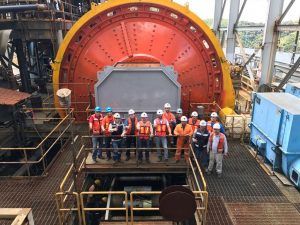 As it advances two gold and base metal projects in Mexico, junior mining company Telson Mining Corporation has been detailing to European investors its plans to build on already substantial progress.

This will reflect its recent transition from an explorer to a mining company with its projects for gold, silver, zinc, copper and lead. 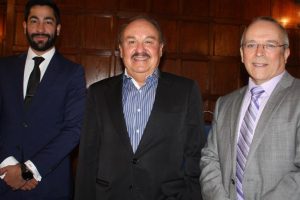 Telson is a Canadian based company listed on the TSX Venture exchange (symbol TSN.V and website www.telsonmining.com).

With zinc prices at a 10-year high and gold and copper prices increasing, there is an atmosphere of optimism around its projects.

The strategy is to turn around undervalued properties and unlock their potential, delivering low-cost production, and growing the company by increasing the size of its mines through exploration supporting expansion, as well as through acquisitions.

The company’s assets are the Tahuehueto project in the state of Durango and Campo Morado mine in the state of Guerrero, the latter recently acquired from the base metals producer Nyrstar. Both projects are on track to transition to commercial stage, by the end of 2018 in one case and early 2019 for the other.

“We are growing Telson towards being a mid-tier producer,” said company founder and president Ralph Shearing during a presentation to investors in London. Mr Shearing was in the City accompanied by chief executive Antonio Berlanga and vice-president for corporate development Enrique Margalef.

Regular metal concentrate delivery and sales are underway from both projects. 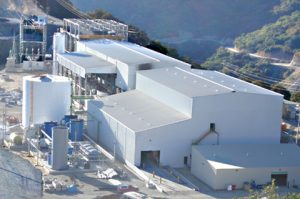 At Campo Morado, Telson re-introduced mining and processing operations in October 2017 with an average 1,400 tonnes per day on a pre-production basis. The first sales, in the four and a half months to the end of February 2018, generated US$10.5m. The aim is before end of the third quarter of 2018 to be able to announce commercial production at a minimum of 2,000 tonnes per day, thereafter increasing to full capacity of 2,500 tonnes per day. “A possible dynamic increase in gold and silver production is on the horizon,” says the company.

Campo Morado was bought at a ‘fire sale’ price of $20m. It is an underground multi-metal mine with infrastructure, installations and equipment capable of processing 2,500 tonnes of ore daily. Original mine-build capital investment was over US$150m with likely well over US$100m of exploration expenditures.  Telson incurred an very low capital cost to bring the mine back into production, and it has a $5m operating capital off-take loan from Trafigura, a large unlisted energy and metals trading and logistics group which globally in 2017 had $136.4bn revenue and traded 326m tonnes of commodities.

Management of the site is in the hands of Mexican citizens experienced in building and operating mines. “In Guerrero some companies are having difficulties,” said Mr Shearing. “We asked local stakeholders and residents in the local community for their support even before we made the acquisition. They said, please put the mine back into production because having it out of production over the last three years is very hard on the community.” Mr Shearing added: “If you employ as many of the local residents as possible, provide training, purchase supplies locally, engage local contractors for trucking supplies including delivering concentrates products to end-buyer, and whenever possible and as much as possible source product and personnel  within the local community, you effectively make the mine part of that community and  the community effectively becomes a part of the mine’s security keeping the bad guys from attempting to operate there.” 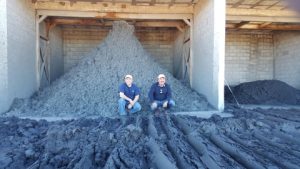 Employing management and others of local origin means a saving on what would otherwise be expat salaries, and Mr Shearing spoke of much progress since Mexican management joined Telson in a corporate restructuring two years ago. All equipment, infrastructure and exploration were included in Telson’s acquisition of the mine and are in place at Campo Morado, which allowed a restart of mining and processing in a short four months after finalising the acquisition.

Telson is looking at implementing techniques for higher recovery, and is carrying out testing to make recoveries from the existing tailings.

A Telson presentation says: “Significant exploration potential at Campo Morado points to a long mine life. Zinc output will rise as the production rate is ramped up to mill capacity – commercial production will transform Telson into a mid-tier zinc producer in the near term – and gold recoveries will gradually increase… and could dramatically increase if tailings leaching is successful.”

Up to the end of 2014 at Campo Morado there were more than 3,000 exploration drill holes totalling 577,000 m, identifying at least seven mineralised zones, containing 16.6m tons of measured and indicated resources grading 4.01% zinc, 0.80% copper, 0.93% lead, 123 grams per ton silver and 1.7 grams per ton of gold; plus 0.988m tons of inferred mineral resources as calculated in an independent NI-43-101 compliant technical report just released by Telson . 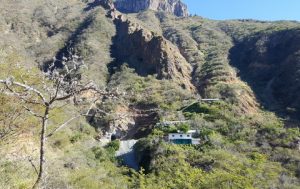 Looking towards haulage level at Tahuehueto.

Mr Berlanga said that the latest news, which included a positive result of an independent preliminary economic assessment study for Campo Morado, “marks another significant milestone for Telson.” The study indicated pre-tax net present value at an 8% discount rate of the mine was US$81m, a figure which was expected to improve in the short run as a result of cost reduction, aggressive exploration and technical strategies.

Tahuehueto is in the prolific Sierra Madre mineral belt, which hosts historic and producing mines and most of Mexico’s active exploration and development projects. It is 100 km southwest of silver mines in the Guanacevi region and about 25 km north of silver mines at Topia.

Tahuehueto is in a “fantastic, large epithermal district,” enthused Mr Shearing. Building a 1,000 tonnes-plus per day underground mine is under way. The primary revenue will be gold in what is estimated at current projections to be a mine with a 12-year life.

It is currently in pre-production at some 135 tonnes per day and the timeline is for it to be producing on site in its own mineral processing plant capable of milling at least 1,000 tonnes per day towards the end of 2018, with commercial production expected the following year.

Pre-production mining averaging 135 tons per day began at this Durango property in August 2017. This produced 22,662 tonnes of ore from the El Creston zone; toll milling at the Atocha processing plant processed two thirds of this, yielding 666 tonnes of lead concentrate and 1,130 tonnes of zinc concentrate. Most of the concentrate was sold, bringing in $5.24m during 2017. 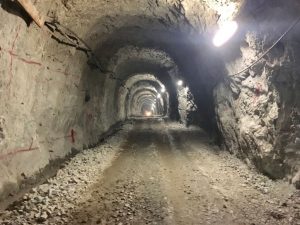 Inside the haulage tunnel at Tahuehueto project

Mr Berlanga welcomed the results of the Tahuehueto pre-production programme which had yielded high precious metal content, and said it would continue throughout 2018, allowing better metal recovery techniques to be transferred to the company’s milling facility under construction there. He hoped this would reduce the start-up and commissioning time for the planned on-site facility.

With a market capitalisation of around C$100m, Telson is considering raising up to $25m in due course.

Mr Shearing said of Mr Berlanga: “Antonio is the driving force behind the company, without question.”

Mr Berlanga is a mining and metallurgy engineer with 42 years of experience in evaluation, design, planning, engineering, construction and operation in the sector in Mexico. He is managing all facets of Telson’s mining, processing, development and exploration work, and setting the company’s strategic direction with the support of management and the board.

A professional geologist, Mr Shearing was directly involved in several world-class exploration and development projects in British Columbia and internationally. He has managed and directed listed companies for 32 years.

Telson Mining has been introduced to London and other European investors by Michel Cornis, managing partner and founder of Cornis Consult Finance, Geneva.