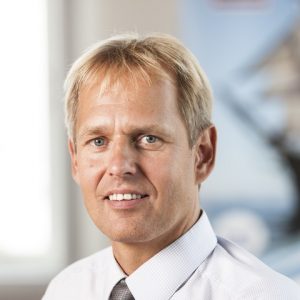 Flemming Aarhus Pedersen, chief financial officer at the Port of Esbjerg, is looking forward to the next stages in the city’s ascent as Denmark’s energy capital.

He is confident that his participation in the Executive MBA in Shipping & Logistics (the Blue MBA) programme at Copenhagen Business School will help him face the challenges of being a key motivator in the Energimetropole or Energy Metropolis, as Esbjerg has become known as it capitalises on its decades of involvement in oil and gas and now in renewable energy (wind turbines).

Mr Pedersen took up his post at Esbjerg in 2014 and started the part-time Blue MBA course in September 2017.
He said: “The Port of Esbjerg is one of the largest ports in Denmark, with emphasis on roll-on roll-off traffic, the oil and gas industry and the wind-power industry. Esbjerg is known as Energimetropole because there are many commercial clusters and great know-how within the energy sector here.

“Esbjerg is in the western part of Denmark and thus close to the North Sea, where many studies forecast that in the coming years there will much activity in the offshore wind industries. It is also expected that the redevelopment of the Tyra project (a large gas field) will generate additional activities in the coming years.

“In my job as CFO at the Port of Esbjerg, I have the overall responsibility for finance, IT and human resources. A port is essentially a company providing infrastructure and other related services. This means that it is a capital-intensive business with large projects that demand a high focus be brought to bear.

“In the last few years the great emphasis on digitisation throughout the commercial world has of course involved ports, particularly in relation to their role as infrastructure providers.”

The Blue MBA is a two-year course arranged in modules to enable candidates – who all hold senior positions in their organisations – to fulfil in parallel all their day-to-day commitments.

Mr Pedersen admitted: “I am probably not a typical MBA student because the opportunity for me to start at CBS came relatively late in life – at the age of 51.

“However, this has its advantages. Among other things, I can draw on the broad work-experience that I have built throughout my career, and I have more time for studying as my children are grown-up.” 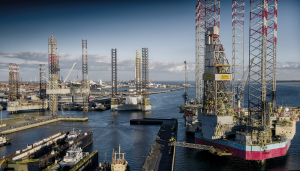 For much of his career, he has worked with manufacturing companies. “Via the Blue MBA, I therefore have the opportunity to acquire quickly a great background knowledge covering the latest theories within the maritime world. I have learned more about the ‘blue world’ in the first half year at CBS than I have in the four years I have been CFO at the Port of Esbjerg.

“The Blue MBA has also given me a unique network with the other students who come from all over the world.”
Mr Pedersen trained as an auditor at KPMG, where he worked with and was responsible for small and medium-sized companies.

After that he was a finance manager of a manufacturing company which produced bearings for steel structures, mainly for the construction industry. He then became a group controller overseeing 13 companies in northern Europe, where he was controlling and reporting across countries, divisions, segments and companies. “This was very complex and at the same time I had to keep track of transfer pricing.”

Next, he was hired by an owner-managed concern with the aim of taking it being a more senior player, building up an export department.

After that he was asked to join a group with production companies in different markets, with his tasks including starting a factory from scratch in Eastern Europe. “Today, it is a company with more than 200 employees. As group finance manager I had the matrix responsible for finance for all the subsidiaries in China, Romania, UK and Denmark. It was very educational to work with the authorities and the culture in both China and Eastern Europe.

“Now I am at the Port of Esbjerg, a whole other industry, a whole different world. For me, this is evidence that it is important for everyone to be ready to change and see the opportunities that lie in front of one. With the knowledge I am now accumulating at CBS and the Blue MBA, I feel prepared for the future and the challenge to come.”

He has taken to his “new” industry of maritime with gusto: he takes part in in various committees concerned with tax and VAT matters for Danish ports.

Throughout his career, Mr Pedersen has spent much time optimising business procedures and processes, “and right now I am working on a project where we build Business Intelligence on top of our Enterprise Resource Planning (ERP) system integrating the key functions and connecting it with other databases in the company. I am responsible for the development and optimisation of our ERP system, thus automating as much as possible

“As part of the optimisation process, I have always sought to be involved in the individual tasks, whereby I could precisely describe and participate in the development of the tools in our systems as saving workflows or completely automate the process. For me, this has proved to be the right way forward. It means that I can discuss challenging tasks and support our employees in their daily work.”

Mr Pedersen is undergoing training in the business analytics process PowerBI, “which I can see will bring many benefits and make the company more transparent to everyone in the organisation.”