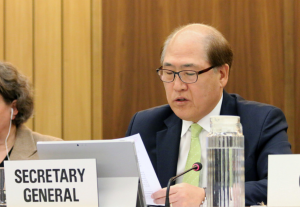 IMO’s key environmental meeting adopted an initial GHG strategy for shipping, adopted amendments to the Ballast Water Management Convention; approved an amendment related to implementation of the sulphur 2020 fuel oil limit;  agreed to develop a ban on heavy fuel oil the Arctic following an impact assessment; and agreed to address the issue of marine plastic litter from shipping.

The vision confirms IMO’s commitment to reducing GHG emissions from international shipping and, as a matter of urgency, aims to phase them out as soon as possible in this century.

More specifically, under the identified “levels of ambition”, the initial strategy envisages for the first time a reduction in total GHG emissions from international shipping which, it says, should peak as soon as possible and to reduce the total annual GHG emissions by at least 50% by 2050 compared to 2008, while, at the same time, pursuing efforts towards phasing them out entirely.

The strategy includes a specific reference to “a pathway of CO2 emissions reduction consistent with the Paris Agreement temperature goals”. See briefing 06/2018.

Energy-efficiency design standards for new ships and associated operational energy-efficiency measures for existing ships became mandatory in 2013, with the entry into force of relevant amendments to MARPOL Annex VI.

The Committee was informed that more than 2,700 new ocean-going ships have been certified as complying with the energy efficiency standards.

The MEPC received a report on progress by the correspondence group on review of the Energy Efficiency Design Index (EEDI) beyond phase 2 and re-established the group to continue its work. The correspondence group is expected to make an interim report to MEPC 73 (October 2018) with a final report to MEPC 74 (Spring 2019). That report is expected to provide a recommendation on the time period and reduction rates for EEDI phase 3 requirements and the outcome of discussions within the correspondence group on a possible introduction of phase 4 requirements, with associated time period and reduction rates.

Draft amendments to regulation VI/19.3 proposed in relation to exemptions on EEDI for ice class ships were referred to the correspondence group.

MARPOL amendments to make mandatory the data collection system for fuel oil consumption of ships entered into force on 1 March 2018. They require data collection to start from 1 January 2019.

MEPC 72 was updated on the status of the development of the IMO Ship Fuel Oil Consumption Database which was launched in March 2018.

Relevant matters concerning implementation of the requirement were considered. The MEPC approved the Sample format for the Confirmation of compliance, early submission of the SEEMP part II on the ship fuel oil consumption data collection plan and its timely verification pursuant to regulation 5.4.5 of MARPOL Annex VI. The confirmation of compliance should confirm that the methodology and processes are in place for the ship to report the data required under the regulations.

The 0.50% limit on sulphur in fuel oil on board ships (outside designated emission control areas or ECAs, where the limit is 0.10%) will come into effect on 1 January 2020.

The MEPC approved, with a view to adoption at MEPC 73 (22-26 October 2018), draft amendments to MARPOL Annex VI to prohibit the carriage of non-compliant fuel oil for combustion purposes for propulsion or operation on board a ship.

The exception would be for ships fitted with an approved “equivalent arrangement” to meet the sulphur limit – such as an exhaust gas cleaning system (EGCS) or so-called “scrubber” – which are already permitted under regulation 4.1 of MARPOL Annex VI. These arrangements can be used with “heavy” high sulphur fuel oil as EGCS clean the emissions and therefore can be accepted as being at least as effective at meeting the required sulphur limit. Additionally, ships undertaking research trials of emission reduction and control technology can be exempted under regulation 3.2 of MARPOL Annex VI.

For a ship without an approved equivalent arrangement, the effect of the draft amendment, which would enter into force on 1 March 2020, would be that the sulphur content of any fuel oil used or carried for use on board shall not exceed 0.50%.

IMO’s Sub-Committee on Pollution Prevention and Response (PPR) is currently developing guidelines to support the implementation of the 2020 sulphur limit. An intersessional working group will meet 9 to 13 July 2018, in order to ensure appropriate guidelines can be considered and issued in good time.

These guidelines will cover a range of issues related to implementation, including ship planning for implementation; verification and control issues; and fuel oil non-availability reporting.

Consistent implementation of the 0.50% sulphur limit for all ships will ensure a level playing field is maintained, with the result that the expected improvement of the environment and human health will be achieved. Sulphur oxides (SOx) are known to be harmful to human health, causing respiratory symptoms and lung disease. In the atmosphere, SOx can lead to acid rain, which can harm crops, forests and aquatic species, and contributes to the acidification of the oceans.

The best practices are intended to assist in assuring the quality of fuel oil delivered to, and used onboard ships, with respect to both compliance with the MARPOL requirements and the safe and efficient operation of the ship.

Implementation of the Ballast Water Management Convention – amendments adopted
The International Convention for the Control and Management of Ships’ Ballast Water and Sediments, 2004 (BWM Convention), entered into force in September 2017 and has, to date, been ratified by 69 countries, representing 75.11% of world merchant shipping tonnage.

The amendments relate to the implementation of the treaty, including the schedule for ships to comply with the requirement to meet the so-called D-2 standard (amendments to section B). In accordance with resolution MEPC. 287(71), Parties to the BWM Convention have already implemented the schedule for compliance outlined in the amendments since the entry into force of the BWM Convention.

Other amendments (to sections A and D) make mandatory the Code for approval of ballast water management systems, which was also adopted at the session. Further amendments relate to section E on survey and certification.

Experience-building phase
With the BWM Convention’s entry into force, and the adoption of a first set of amendments, there is now increased emphasis on its effective implementation and enforcement.

The experience-building phase (EBP), established through resolution MEPC.290(71), will enable port States, flag States and other stakeholders to gather, prepare and submit data, the analysis of which will allow a systematic and evidence-based review of the requirements of the Convention and the development of a package of amendments to the Convention as appropriate.

MEPC 72 approved the Data gathering and analysis plan for the experience-building phase associated with the BWM Convention (BWM.2/Circ.67), which sets out the specific arrangements for data gathering during the EBP (including the interfaces through which data may be submitted to the EBP and the specific data requirements for each interface), as well as principles and organizational arrangements for analysing the data collected, and the timeline for the EBP.

Guidance for uniform implementation of the BWM Convention
The MEPC approved the following circulars: Unified Interpretation of Appendix I (Form of the International Ballast Water Management Certificate) of the BWM Convention (BWM.2/Circ.66); revised Guidance on scaling of ballast water management systems (BWM.2/Circ.33/Rev.1); and revised Guidance for Administrations on the type approval process for ballast water management systems (BWM.2/Circ.43/Rev.1).

Heavy fuel oil in the Arctic
The MEPC considered the development of measures to reduce risks of use and carriage of heavy fuel oil as fuel by ships in Arctic waters and agreed the scope of work for the Sub-committee on Pollution Prevention and Response (PPR), which meets for 6th session PPR 6 in February 2019.

The Committee requested countries to submit proposals on an appropriate impact assessment methodology process for consideration at MEPC 73 in October, with a view to facilitating the work to be undertaken by PPR Sub-Committee.

Currently, the use and carriage of heavy fuel oil is banned in the Antarctic under MARPOL Annex I regulation 43. It is recommended in the Polar Code that the same rules are applied in the Arctic.

Marine litter
The MEPC agreed to include a new output on its agenda, to address the issue of marine plastic litter from shipping in the context of 2030 Sustainable Development Goal 14 (SDG 14).

Member Governments and international organizations were invited to submit concrete proposals to MEPC 73 on the development of an action plan.

The Food and Agriculture Organization (FAO) and other international organizations to keep the Committee updated on their work related to addressing marine plastic litter. The MEPC also heard from FAO about the FAO Voluntary Guidelines on the Marking of Fishing Gear, which will be submitted to the thirty-third session of FAO’s Committee on Fisheries (COFI) 9-13 July 2018.

Review of biofouling guidelines
The Committee agreed to include a new output on review of the 2011 Biofouling Guidelines (resolution MEPC.207(62)) in the post-biennial agenda of the PPR Sub Committee with two sessions needed to complete the work.

IMO is in the preparation phase for the GloFouling Partnerships project – a collaboration between the Global Environment Facility (GEF), the United Nations Development Programme (UNDP) and IMO. The project will address the transfer of aquatic species through biofouling, in other words, the build-up of aquatic organisms on a ship’s underwater hull and structures. The project will focus on the implementation of the Biofouling Guidelines, which provide guidance on how biofouling should be controlled and managed to reduce the transfer of invasive aquatic species.