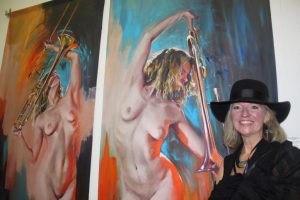 When the Montreal contemporary artist Josée St-Amant engaged a young woman for a studio session as a nude model, her sitter brought along a saxophone she was planning to take later to a jazz rehearsal.

St-Amant (she is known to friends and acquaintances by her family name) instantly realised the artistic possibilities. She asked the fine-featured model to clutch the musical instrument to her bosom as she adopted the naked poses.  With that flash of creativity, a whole suite of glorious expressionist artworks was born. This would be St-Amant’s NakedJAZZ project. 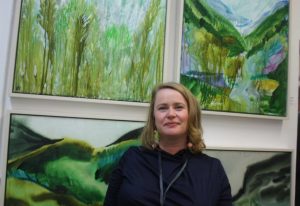 The results are canvases of explosive colour and beautiful eroticism – designed to emphasise women’s freedom over the use of their body. Some of St-Amant’s smouldering works have just been on show among the contributions from 100 UK and international artists at Flux exhibition, a grand spectacular hosted by Chelsea College of Arts at its campus in Pimlico.

Josée St-Amant says: “Painting nudes forces me to step out of boundaries in a humble attempt to bring out the divine in my models.  Guided by the spirit of sexual neutrality of ancient artwork, I strongly believe that my expression of female nudity as a form of art likely instils esteem for women in society at large.”

She adds: “I personally find it very important to be exposed to and be comfortable with nudity as it is an essential part of us as human beings. Respect for women comes with the acceptance and freedom of representation of the female body.” 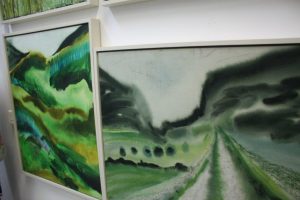 How do such ethical principles resonate with jazz music? That is an easy question for someone from Quebec’s largest city, where every summer the streets are jammed with musicians of all stripes celebrating one of the world’s biggest jazz festivals, the dates in 2018 being from June 28 to July 7.

She quotes Louis Armstrong as saying: “What we play is life,” and revels in what she calls “the intuition of beauty.”

She declares: “With painting as the epicentre of my life and jazz bringing everything to life, mixing the two comes to me naturally, by pure instinct.” When she hears a jazz group strike up, she closes her eyes and sees an array of colours dancing before her – “tones of reds and oranges swirling with an electrifying palette of blues.” 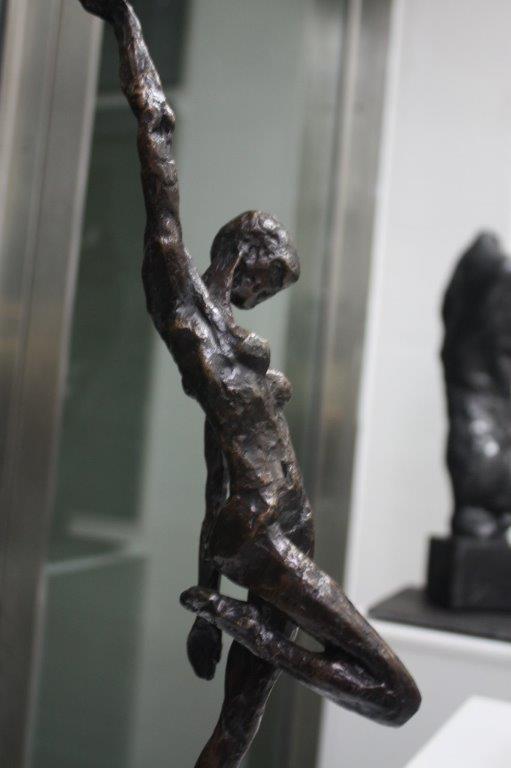 Without sacrificing detail, she produces a concoction that is “a great mixture of music, joy, painting, rhythm, colour – full of emotion!”

Her glorious, sensual first series in this discipline was called Karin & Sax, done in oil on canvases in which the dimension 122 cm usually figured. There followed the series Venus of Montreal, confidently brought forth in frameworks 244 cm by 107 cm. These outstanding works can be viewed at  www.stamant.co

The main theme of her creativity is “the human being in its duality; the beauty of the body with movements, the beauty of innocence versus its stupidity, its power of destruction, self-destruction.”

Aside from aligning herself with jazz, St-Amant has delved into other routes, including a series in pastel and ink called Project Alzheimer. Her therapeutic escape is painting flowers – “nothing better for morale!”

Elsewhere in the Chelsea exhibition, Sophie O’Leary showed how she had reached back for inspiration into the origins of abstract art, while coming up with landscapes of an original and organically dense nature, patterned after places where she has resided.

Her subjects for works displayed included The Cloughmore and Warrenpoint in Northern Ireland, and Clapham Common in London. She lives in the Westminster area and works from her studio in Clapham.

Sophie’s depictions delight in the intense greens of vegetation, signalling a love of the outdoors. The Cloughmore stone is a huge granite boulder which was deposited high on the forested slopes above the town of Rostrevor, Country Down, during the last Ice Age more than 10,000 years ago. The 50-tonne stone may have come from what was later known as Strathclyde Bay, Scotland. Warrenpoint is a port scenically set in the same county, at the southern approach to the mountains of Mourne, on the northern shore of Carlingford Lough, a narrow strait away from the Republic of Ireland. A popular song made the Mournes the most well-known mountains in Ireland. 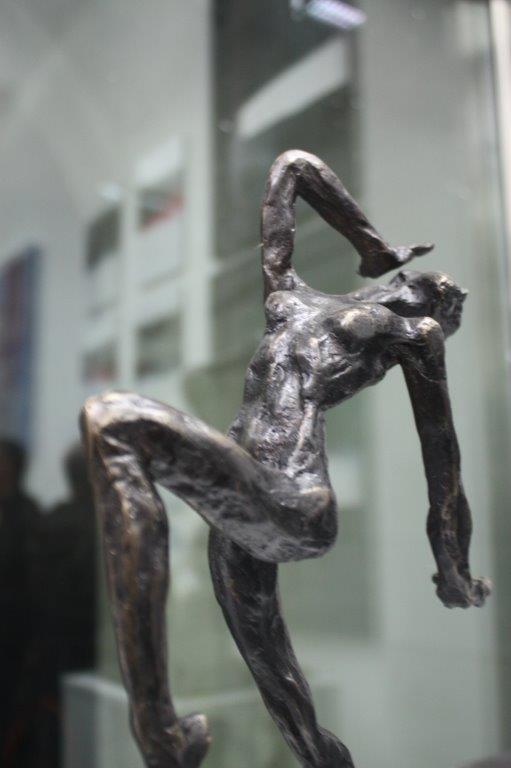 Sophie produces her semi-abstract compositions variously with collage, oils, pastels and watercolours. Travels including time in India and Russia are one source of inspiration. She at the same time looks to artists influenced by Theosophist ideas, which claim that knowledge of God can be achieved through spiritual ecstasy or direct intuition and were popularised by the Theosophical Society founded in 1875. These are well-chronicled figures including Wassily Kandinsky, Piet Mondrian and Kazimir Malevich; and Swedish painter Hilma af Klint (1862–1944) who predated them. Hilma af Klint’s role as a pioneer of abstract art has only recently been celebrated. In 1904 during a séance she was told by “a spirit power” to make paintings “on the astral plane,” representing transcendental truth rather than the likeness of man; but her paintings were first seen in public only in 1986.

Sophie O’Leary says that her own “interest in transcendent energy and spirit over the mundane has a resonance which reaches beyond the conscious mind and gives form to her painting.”

Her inexperience in painting relative to many of her contemporaries makes her charismatic works especially impressive. With a BA in anthropology, she spent many years teaching and only recently graduated with a certificate in fine arts from Morley College, London. In 2017 she had a residency at the Cookhouse Gallery at Chelsea College of Arts.

In one of the many other rooms at the exhibition, versatile Tony Nero was in his element, adding passers-by and art installations to his vast collection of photographed subjects. He is at home in many mediums: pencils, charcoal, pastels, oils, water colour and stipple-dot drawings, and everything he does reflects his love of people, especially “dynamic characters.” 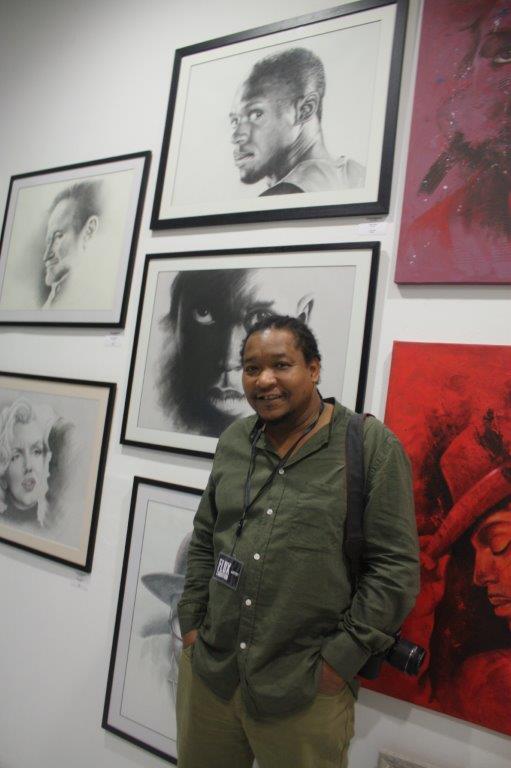 Exhibition visitors marvelled at his close-up portraits  including those of black heroes such as sprint champion Usain Bolt. “I love to paint just about anything,” he said. “Without art in my life I would be like a butterfly without wings.” A couple of years ago he sold a picture of pop star David Bowie to the percussionist Dame Evelyn Glennie.

Tony moved from London to Peterborough, where he takes an energetic part in developing the local art scene. He comes from the Caribbean island of St Vincent, where his passion for art was soon spotted by his teachers. As he developed his career, he was mostly self-taught until he enrolled in London Guildhall University there he furthered his technique in abstract oil paintings.

He trained as a graphic designer and worked in the music industry, producing record sleeves, posters and magazines and ran a graphic studio.

Small, sensitively crafted bronze sculptures by Kate Viner with titles such as Nurture and Freedom drew much attention. This BA graduate of Winchester School of Art is as a professional sculptor and printmaker who has been commissioned to create works, sometimes of large scale, in public places, most outstandingly the cleverly-named Captive Orbience, a massive, suspended aluminium and stainless-steel sphere at Tangmere Business Park, Chichester.

Kate works in both abstract and figurative modes, saying that such treatments “mirror our shared human concerns and the deeper subconscious, each approach feeding the other.” Another key quote is “Contemplative figurative art, more than ever, resonates today in our complex noisy tumultuous world of reoccurring human narratives.” 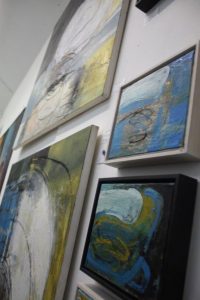 Underlining the fact that sculptors are usually as much technicians as artists, Kate works with steel, bronze, plastics and clay, and practises welding, carving and casting.

Day Bowman is another artist whose work is at the boundaries of figuration and abstraction. She has highlighted the problems of wastelands and trash that surround cities and ports, and shows such forgotten corners of urban landscapes through the windscreens or rear-view mirrors of cars and buses.

She brought to the Chelsea exhibition intriguing “gestural canvases” from her Road Trip series.

Day – a graduate of Chelsea School of Art and London University – has her work in many collections, including that of the Royal National Lifeboat Institution, and has collaborated with film-makers, composers and musicians to produce installations in sacred spaces, market squares and railway stations throughout the UK. 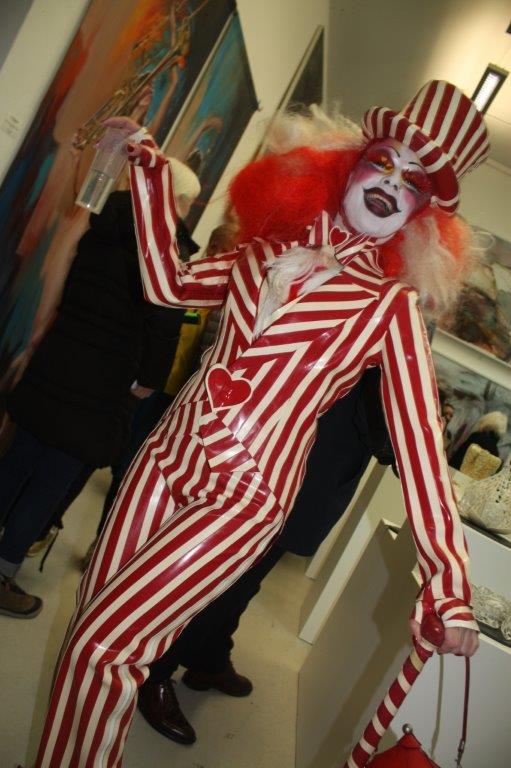 A lively opening night at the exhibition welcomed performance artists such as Marnie Scarlet who is described as “the scarlet diva of fetish cabaret,” who was wearing one of her ingenious burlesque costumes made by herself. Her publicity material says that “Marnie Scarlet will steal your heart and most probably make a nice hat out of it!”

Flux describes itself as “London’s leading exhibition to discover the most talented, dynamic painters, sculptors and performance artists.” It is curated by Lisa Gray, the founder of Flux, which has seen five editions and will doubtless run to many more.