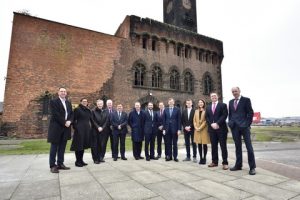 Liverpool city region’s £4bn powerhouse maritime sector will lead the UK’s industrial strategy in the coming decades – according to one of the country’s industry leaders.

Mr Dingle presided over a National Council meeting of Maritime UK at the Birkenhead headquarters of Mersey Maritime – the second one it has held in Merseyside in recent months. It further cemented the relationship between the two organisations and positioned Mersey Maritime to take a major role in the UK’s current and future maritime policy.

And Mr Dingle also spoke at a top-level industry dinner at Liverpool’s Malmaison Hotel organised by, Mersey Maritime. Among the guests were representatives of the UK Chamber of Shipping, the British Ports Association, the Society of Maritime Industries, British Marine, the Institute of Chartered Shipbrokers and Maritime London, among others.

Earlier in the day, Mr Dingle had been given a tour of Wirral Waters and the Grade II-listed Victorian hydraulic tower that will former the centrepiece of the MKH. Work on the project is due to start this summer.

Clearly bowled by what he had seen, Mr Dingle told the dinner: “Today I learned all about the Wirral Waters project and the Maritime Knowledge Hub – and I think it is an amazing project.

“The whole concept of Wirral Waters is something everyone involved should be very proud of. It is tribute to the ambition of Peel Land and Property and Wirral Council and to the part played by Liverpool John Moores University and Mersey Maritime.”

The MKH is being led by Mersey Maritime and the umbrella organisation is now working closely with Maritime UK on influencing the Government’s industrial strategy. And Mr Dingle acknowledged that the “collaborative approach” of the Merseyside sector was now a model for the rest of the UK to follow.

He added: “We are working really closely with the Government. The relationship between the Government and the maritime industry has never been stronger than it is right now.

“We are focused on a maritime sector deal within the government’s industrial strategy and Merseyside is right at the heart of that strategy.

“There is a uniqueness about Merseyside and you do business in a wonderful way. You seem to work more collaboratively, quickly and effortlessly. This is a very exciting time.”

The sector deal proposal has a significant focus on technology and innovation, which if supported by government would see the UK take the lead in the development of autonomous and green shipping.

Following last week’s commitment to reduce carbon emissions by the IMO, UK industry recognises the significant opportunity for rapid technological development and subsequent competitive advantage.  The proposals sees research and academic assets from across the UK bound together with industry to jointly focus efforts on these challenges. Liverpool’s assets will be central to the project.

Chris Shirling-Rooke, chief executive of Mersey Maritime, welcomed the ringing endorsement from Mr Dingle, and said: “As soon as he saw what was happening here in respect of Wirral Waters and the Maritime Knowledge Hub, he was clearly overwhelmed.

“Liverpool city region’s maritime sector not only has an illustrious history – it is leading the way right now and the whole UK industry clearly recognises how important we are to the future prosperity of the country.”

Dachser’s growth gets a tail wind

Volatile Capers keep the BDI above the 1,000 point…