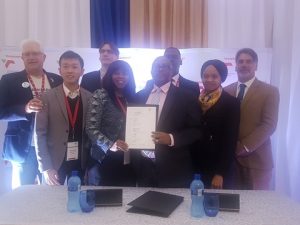 From the signing of the agreement; full caption *

[Saldanha Bay, South Africa, 23 April 2018]   South Africa’s first dedicated and customised facility supporting offshore oil and gas activities will be introduced at the Port of Saldanha. This follows the conclusion of an agreement between Transnet National Ports Authority (TNPA) and Saldehco Pty Ltd, which was signed off at an official ceremony at the port on Monday, 23 April 2018.

Speaking at the ceremony at the Port of Saldanha, TNPA Chief Executive, Shulami Qalinge, said: “The OSSB will play a key role in positioning Saldanha as an oil and gas services hub and stands to benefit from the international logistics and energy experience of global players, backed by the local expertise and empowerment credentials of Semona.”

Saldehco was procured through a Section 56 market approach, which sees TNPA – as landlord and ports master planner mandated by Section 56 of the National Ports Act – enter into contracts with private terminal operators to design, construct, rehabilitate, develop, finance, maintain, operate and transfer port terminals or facilities back to the Authority.

TNPA has provided berth infrastructure for the OSSB at the port’s general maintenance quay. Saldehco will be responsible for providing warehousing, workshops, offices, canteen and rest room facilities, as well as equipment such as cranes and other rubber tyred equipment to operate the facility.

Representing Saldehco, Chairperson Sophie Masipa said: “In partnering with Transnet, Saldehco will focus on developing the marine and ocean services industry in Saldanha Bay. Our focus is on making Saldanha a hub base for marine related activities and services on the Western Cape. We expect this to contribute to the area’s economic and social development through employment creation and development of the small business sector.”

She added: “Some of the expected activities to be provided will include critical need based services such as marine bunker, lubricants, as well as fresh water for vessels calling at the port and marine traffic passing by the Cape of Good Hope. Additionally, a support facility is intended to allow for fabrication of offshore structures in support of both projects on the Western Cape and up to the West Coast of Africa, as well as capacity to support offshore and onshore pipe laying projects.”

The OSSB will serve vessels engaged in supporting offshore exploration and production activities along the West and East coasts of Africa and calling at South African ports for support and logistics services.

Transnet Group Chief Executive, Siyabonga Gama, said: “We are confident that the job opportunities and capital investment that will be created by the successful implementation of this project will change the economic landscape of the local, regional and national economy.”

Fundamental to TNPA’s oil and gas strategy is the creation of sustainable jobs and opportunities, skills development, and access to business opportunities for small to medium sized BBBEE companies.

TNPA has for years engaged in ongoing collaboration with the Saldanha Bay Industrial Development Zone Licencing Company to optimise opportunities for foreign direct investment in the oil and gas sector in Saldanha.

The Authority recently concluded a commercial development lease agreement with the Saldanha Bay IDZ for the development of various pockets of land, totalling 35 hectares in the port, as the first tranche of IDZ designated land parcels.

This is the first time that an SEZ has been designated within a South African commercial port and is a historical achievement for the Port of Saldanha and its hinterland, as well as for TNPA and Transnet in driving economic growth and investment.

The IDZ and TNPA will jointly market the port to enable the sub-leasing of various pockets of land and the IDZ will be the implementing vehicle for the provision of infrastructure, promotion of investment and management of the SEZ. The IDZ was granted a permit to operate the SEZ with funding of R303 million for the development of the landside area. The core activities within the area will include logistics, repairs and maintenance, new builds and fabrication activities for the servicing of upstream and midstream oil and gas services.

Qalinge concluded: “On behalf of TNPA and Transnet, I would like to thank the Saldanha Bay IDZ Licencing Company for its unrelenting work to establish Saldanha as a world-class, internationally recognised and thriving industrial centre of South African marine engineering, where the local economies can benefit from entering the global oil and gas value chain.”

The OSSB will operate within the SEZ and will offer incentives to the industry, both local and international, to establish an oil and gas hub to drive the port’s and region’s overall focus on positioning itself as a global player in the sector.