Abortive repairs: a new accident or the unfinished business of an old one? 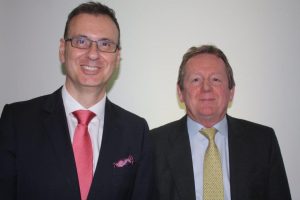 Abortive repairs: a new accident or the unfinished business of an old one? Association of Average Adjusters speaker tackles the dilemma

A three-pronged approach is required when considering the issue of a new intervening cause in contentious instances where maritime casualties have potentially been aggravated by shiprepair defects.  This position was advocated by the speaker at the spring 2018 seminar in London of the Association of Average Adjusters.

A fault, introduced during the repairs to a ship’s hull or machinery, can have knock-on consequences that may result in huge physical damage to the asset and consequently the need to repeat the repairs.

The problem, when it appears, is a source of major disputes between shipowners and insurers and can lead to protracted wrangling, Stelios Magkanaris, who is a marine claims adjuster with the Swedish Club in Piraeus, made clear.

Mr Magkanaris, a Fellow of the Association of Average Adjusters, told the City gathering: “The question is simple: provided all perils and losses that struck the vessel are insured, in what way should one treat the separate accidents – can they all be considered one single accident?” 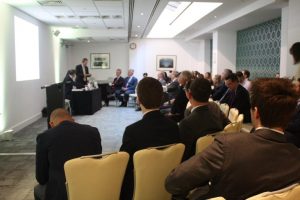 He cautioned that the answer was more complex and declared: “The life of every practitioner in the insurance industry and especially of the adjuster is spent in a sea of grey zones. What a practitioner needs, when in such predicament, are clear qualitative guidelines in order take a fair, reasonable and well-substantiated view.”

The seminar is a biannual event organised jointly by the Association of Average Adjusters and the International Underwriting Association. On this latest occasion, on April 19, 2018, the briefing addressed the questions arising when a vessel repair fails, and damage is ongoing or gets worse.

Mr Magkanaris crystallised a scenario that might arise: “A vessel has been struck by an insured peril and sustained recoverable damage. The repairs of the original damage failed shortly after they were completed. The surveyors of all sides agree about the cause of the original failure as well as the cause of the second failure and both causes are indeed insured perils. It is common understanding that the defect that caused the second failure, or multiple subsequent failures, was introduced during the repairs of each preceding damage.”

The positions would range, on one side, from that of the shipowner who claimed that all losses arising out of the original peril including the unfortunate repairs constituted one large claim. The underwriter, on the opposite side, considered that the negligent acts, and/or the defects introduced in the repairs of each damage constituted a new casualty, which should attract another policy deductible. 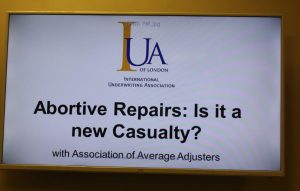 The average adjuster would be pressed by both sides to decide how many deductibles should be applied. The real issue was whether the causes of two or more independent loss occurrences were separate.

“Of course,” said the Swedish Club adjuster, “one understands that the quality control of a normal vessel is not the same as that of a space station. Defects are expected to be present during the manufacturing, or the repairs, but due to the safety factors and the quality control in the design it is expected that within the lifetime of the structure they will not result in any substantial failure of the structure or the machine.

“The repairs to a vessel carried out of necessity in a remote place in the world, lacking equipment and expertise, cannot be compared with the comfort, facilities and wealth of knowledge available at a modern shipyard. Different repair expectations are anticipated from the two extremes.”

Mr Magkanaris spoke of the dilemma in adjusting after abortive shiprepair: “Neither in the English courts nor in Canada, the United States or Australia, did I manage to find a case that will exactly fit the circumstances,” but one could draw indirect guidance from the well-established authorities on the law of causation.

A century ago, in Leyland Shipping v Norwich Union Fire Insurance Society, Lord Justice Shaw had said in essence about proximate cause: “Don’t look for easy solutions.” One needed to identify all the strings in the net as well as the gravity of each string and then stand back and assess which cause is the most proximate in efficiency for the loss. If the proximate cause is any other than the original cause, then the causation link has been severed.

Applying this to “abortive repairs,” three factors, said Mr Magkanaris, should be ascertained:

Foreseeability: Is the cause of the second damage, considering the circumstances of the first repairs, something that one would reasonably expect to be introduced into the ship structure?

Likelihood: Is the defect that caused the second damage something that, if known, one would likely expect to cause a failure of the repairs?

Frequency: What is the frequency or history of a failure?

Mr Magkanaris said that these three dimensions were independent and aimed to weave the causation map from which one would see whether the causal link was strong enough to consider the original peril as the proximate cause of the subsequent failure, or the chain had been broken by a subsequent event.

All three questions were highly technical and could be answered only by a technical expert.

The question was not how foreseeable was the second damage that arose from an original peril, but how foreseeable, under the circumstances of the first repair, that a defect of such nature and magnitude would be introduced into the structure.

He compared original repairs to a propeller carried out by expert welders under continuous class supervision with a propeller repair elsewhere that was carried out in a way that was “not just negligent; it could better be described as criminal.”

He cited negligence of repairers as the most frequently encountered cause of failure in another area, that of generators.

Mr Magkanaris offered an example where a vessel strikes a berth causing mild hull damage. A new plate is fitted to the small indentation while the vessel is alongside a repair berth, but the welders use the wrong treatment for high tensile steel. A month later the welding of the plate fails and causes a larger but still manageable crack affecting the frames and a couple of brackets. When the brackets are replaced, there is a small misalignment. The ship meets heavy weather at sea, and the frame is shredded, and the side shell develops a large crack which allows water into the engine room. The vessel deviates to the nearest port of refuge to carry out urgent and extensive repairs.

Was it reasonably foreseeable as well as likely that the initial bump on the dock would result in a whole frame failing as well as cracks in the side shell? Could somebody say that of a negligent welder who grabbed the wrong box of electrodes to weld a small insert? Or could one reasonably claim that the negligent fitter who missed the alignment of new brackets by a few millimetres had caused the frame to shred and the side shell to open?

Could someone reasonably consider that the damage of the last failure, which probably put the vessel at risk, is the natural result of the initial bump, without any severing of the causation link?

Mr Magkanaris said that the aim of the three recommended parameters was to provide a structured, qualitative approach and equip the adjuster or claims practitioner with the tools to weave the web of proximate causes and conclude whether there was a new intervening cause.

He admitted: “The grey zone is when a defect is reasonably foreseeable, not likely to cause damage and despite the prognosis, it causes severe failure. Applying the above parameters, we are looking at a highly foreseeable defect which even if known, would have a low likelihood to cause a failure.”

Keith Jones, a former chairman of the Association, presided at the meeting.  Mr Jones, an executive of broking group Aon, congratulated Mr Magkanaris on the breadth of his examination of the problem, saying he had applied much knowledge from his earlier career in marine engineering and shipbuilding supervision.

Note to editors: The Association of Average Adjusters promotes professional principles in the adjustment of marine claims, uniformity of adjusting practice, and the maintenance of high standards of professional conduct. Irrespective of the identity of the instructing party, the average adjuster is bound to act in an impartial and independent manner. The Association plays an important part in London insurance market committees and has strong relationships with international associations and insurance markets.