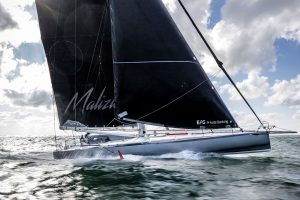 Gilching, Germany (May 2, 2018) – Around the world with BMW i and Torqeedo technology: German sailor Boris Herrmann is planning to compete for the Yacht Club de Monaco in the Vendée Globe solo, around-the-world race in 2020 with the yacht ‘Malizia’. BMW and Torqeedo plan to support Team Malizia with lightweight construction and zero-emission drive technology.

BMW has a successful record of technology transfer between competitive sailing and automobile manufacturing through their long history of involvement in the America’s Cup. Materials originally developed for racing like ultra-lightweight carbon fiber reinforced polymer are now used to construct BMW’s i3 and i8 vehicles. Since 2017, the lithium batteries which power these groundbreaking BMW vehicles have been adapted to power Torqeedo’s innovative electric drive systems for boats.

The next generation of BMW i lithium batteries, which are characterized by outstanding energy density and longevity, have already been made boat-ready by Torqeedo. Together with BMW, attempts are now underway to develop a reliable and emission-free drive system solution for ‘Malizia’.

The objective is the development of an alternative to the diesel power unit, which weighs in at around 380 kg (including fuel) and is on board primarily for safety reasons. One option could be to replace this with a Torqeedo electric inboard motor with BMW i battery technology, to cross the oceans of the world with zero emissions. An electric motor can act as a hydrogenerator while the yacht is under sail, charging the lithium batteries and providing power to the onboard systems and the canting keel.

“Emission-free round the world under race conditions, whilst simultaneously producing your own energy, is a thoroughly inspirational concept,” said ‘Malizia’ skipper Boris Herrmann. “Our Technology Partner BMW is conducting intensive research into battery development for hybrid and electric cars. We share a common vision of integrating these batteries into ‘Malizia’.”

The ‘Malizia’ sails under the flag of the Yacht Club de Monaco (YCM). The YCM vice-president, Pierre Casiraghi, is the youngest son of Princess Caroline of Monaco. He sails regularly with Herrmann and is supporting this Vendée campaign. He will be competing with the German sailor at the Open60 two-man regattas. Last year, Herrmann and Casiraghi secured third place at the legendary Rolex Fastnet Race.