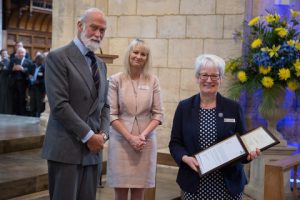 In recognition of her dedicated service to the charity, His Royal Highness Prince Michael of Kent presented Ann with a certificate at Sailors’ Society’s 200th anniversary service

The longest serving member of staff at Southampton-based maritime charity Sailors’ Society, has retired yesterday  (3 May) after 26 years at the organisation

Ann Brogan started working for Sailors’ Society as the secretary to the principal chaplain on 27 April 1992.

Over the years she’s seen many changes.

“The charity has grown so much and there have been so many positive changes,” she said.

As head of programme support and executive relations, Ann has coordinated the provision of welfare to seafarers around the world.

Sailors’ Society has supported thousands of seafaring families during Ann’s time at the charity, but one case stands out for her.

Ann said: “A Haitian seafarer tragically lost his legs in an incident in Poole.”

He was unable to continue with a career at sea and the charity stepped in.

“We held a fundraising drive to support his family during their time of need – thanks to our supporters we were able to raise a life changing amount.”

Ann has been heavily involved in the charity’s milestone anniversary services.

“The 175th anniversary service at Southampton Docks was the first big event I’d been involved with for the Society,” she said.

Her Majesty the Queen and Prince Andrew attended and the event was filmed by the BBC’s Songs of Praise.

“We virtually brought Southampton to a standstill with logjams everywhere as people tried to get a glimpse of the Queen,” Ann added.

Ann has also been key in organising the chaplains’ conferences, which see Sailors’ Society’s port chaplains from around the world join together. The most recent conference was in London last week, marking the charity’s 200th birthday.

Ann said: “I’ve always loved the conferences, they were chances to get to see the people I’d be speaking to on a daily basis.”

“One of the greatest privileges of my job has been supporting the chaplains to do their amazing work and despite being many miles away, many have become very good friends.”

Ann started working 46 years ago, beginning her career at a bank before moving to a chartered accountant and then starting a family with her husband, Eamon.

Ann has plenty of plans for her retirement, including spending time with her family and travelling. Appropriately, her first trip away is a cruise.

Ann is looking forward to spending time with Eamon, her daughters Helen and Kate and granddaughters Lexie and Hollie, but will miss the charity.

“No two days were ever the same and I’ll miss the contact with everyone, especially the chaplains and supporters,” she said.