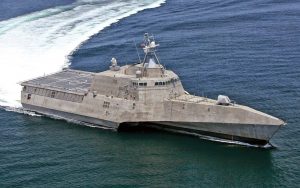 USS Cincinnati photo courtesy of the US Navy

“Our skilled and diverse workforce proudly manufactures the LM2500 gas turbines used to power this sophisticated surface combatant at GE Aviation’s hometown just a few minutes-drive from downtown Cincinnati,” said GE’s Brien Bolsinger, Vice President, Marine Operations. “The May 5 christening is another way to celebrate the LCS 20, its namesake city and GE’s contribution to our country’s national security,” he added.

Representing GE at the christening was Steve Maynard, Director, Customer Application Engineering with GE’s marine gas turbine business. Maynard, a retired U.S. Navy Captain, also is the President of the Greater Cincinnati chapter of the Navy League of the United States. 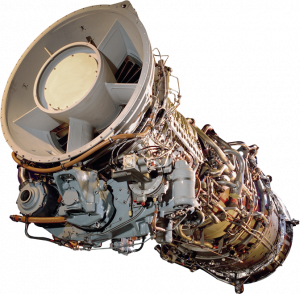 Each of the two LM2500 engines produce over 29,500 horsepower, propelling the USS Cincinnati to speeds in excess of 40 knots or 46 miles per hour. To date, GE has contracts to provide gas turbines for ships up to LCS 30 (even ship numbers are Austal Independence class ships). In addition, Austal is one of five shipyards that have been awarded a concept design contract for the U.S. Navy’s new missile guided frigate FFG(X), based on the Independence class LCS.

LCS 20 is the fifth ship in naval history to be named Cincinnati with the first playing an integral part in the Civil War; the second enforcing neutrality laws during the Cuban Revolution and seeing service during the Spanish-American War; the third acting as a patrol and flagship during World War II; and the fourth, a Los Angeles class submarine, commissioned in 1978 and serving during the Cold War.

GE has delivered gas turbines onboard 646 naval ships serving 35 navies worldwide. The U.S. Navy is GE’s largest marine gas turbine customer, with more than 700 LM2500 family engines. GE has provided 97% of the commissioned propulsion gas turbines in the U.S. Navy fleet. With a GE gas turbine, the U.S. Navy has support worldwide whether onshore or at sea, and interoperability benefits with other U.S. and allied naval ships.

GE Marine Solutions, headquartered in Cincinnati, Ohio, is one of the world’s leading manufacturers of marine solutions, systems and services, including aeroderivative gas turbines ranging from 6,100 to 70,656 shaft horsepower, 4.6 MW to 52.7 MW. For more information, visit ge.com/marine.

GE Aviation, an operating unit of GE (NYSE: GE), is a world-leading provider of jet, turboshaft and turboprop engines, components and integrated systems for commercial, military, business and general aviation aircraft. GE Aviation has a global service network to support these offerings. For more information, visit us at www.ge.com/aviation. Follow GE Aviation on Twitter at http://twitter.com/GEAviation and YouTube at http://www.youtube.com/user/GEAviation.