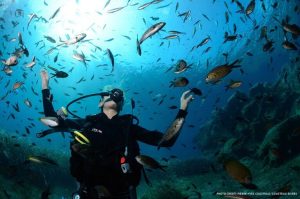 HEALTHY SEAS JOINS FORCES WITH COUSTEAU DIVERS AND CARVICO SPA, FOR THE CREATION OF THE FIRST MARINE PROTECTED AREA IN SANTORINI

The Healthy Seas Initiative, supported by the Italian fabric manufacturer Carvico SpA, has joined Cousteau
Divers, the organisation founded by Pierre-Yves Cousteau, in supporting the creation of the first marine
protected area (MPA) of Santorini.

The Santorini Marine Reserve was first envisioned in 2010 by Pierre-Yves Cousteau and Apostolos Stylianopoulos (Atlantis Dive Centre). In 2017 the MPA Association was created, establishing good synergies between authorities, locals and fishermen who understand firsthand the importance of more sustainable fishing practices, from the perspective of protecting both nature and their livelihood. 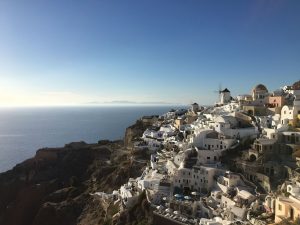 A well-managed, well-sized, well-protected marine sanctuary will have a positive impact on the marine
environment while also generating substantial economic benefits by extending the touristic season beyond
the summer months and creating jobs, in addition to helping fish stocks replenish. The MPA project was
presented in October 2017 to the Hellenic Ministry of Environment and Energy.

On World Oceans Day (June 8th, 2018), Healthy Seas, the circular economy initiative that removes fishing nets
from the seas which are subsequently regenerated into ECONYL® yarn by Aquafil and then used by Carvico for
the production of swimwear, will join forces with Cousteau Divers and Ghost Fishing to carry out the first ever
lost or abandoned fishing gear clean up action at the location which will become the MPA.

The highly demanding diving mission will be executed by diving partner Ghost Fishing and supported by
Atlantis Dive Center. The organisers have created an event on Facebook where the mission will be
livestreamed (www.facebook.com/events/169288210455119). The public and especially schools, are invited
to tune in to the live streaming which promises to be highly educational. The event is being held under the
auspices of the Municipality of Thira (Santorini) and the Goulandris Natural History Museum, and exclusively sponsored by Carvico. 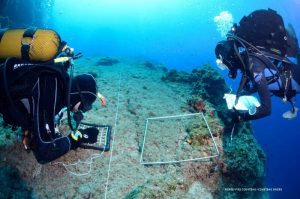 According to a survey that was conducted during 2007-2008, Santorini was found to be the island with the
greatest amount of fish in the Cyclades. However, these findings also point out that the amount of fish of the
Cyclades region is very low compared to other areas of the Mediterranean Sea, and historical overfishing is
partly responsible for it.i

More recently, researchers of the “Marisca” programme, after analysing human activities in the Aegean and
their effect to important habitats, concluded that in order for the Aegean’s unique biodiversity to be
protected, 19% of the Aegean Sea needs to become a protected zone.

Cousteau Divers initiated and supervises the Santorini MPA project since 2011, working with the HCMR
(Hellenic Center for Marine Research) to baseline the ecosystems of Santorini and with Submon to create a
management plan for the area, with a grant from the Stavros Niarchos Foundation.

For more information, viewers can visit: