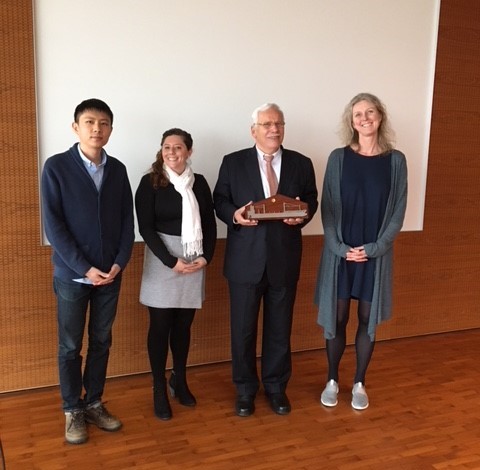 It was an inspired way to express appreciation to one of Europe’s most distinguished shipping chiefs for his hospitality: presenting him with a finely-crafted model of the type of vessel that has given stalwart service to his fleet.

The surprise was prepared by members of the Blue MBA (Executive MBA in Shipping & Logistics at Copenhagen Business School) for Frank Leonhardt, who heads the family-owned shipmanagement company Leonhardt & Blumberg Reederei.

Mr Leonhardt had kindly opened the doors of his modern offices overlooking the busy Elbe to the Blue MBA participants for lectures and discussion as part of module four of their course.

At the conclusion, the Blue MBA men and women, who have senior positions in their employers’ organisations, presented Mr Leonhardt with a model of the containership Hansa Flensburg, constructed at the Garden Island Dockyard in Sydney, Australia, by the Thales Ship Repair Services team. 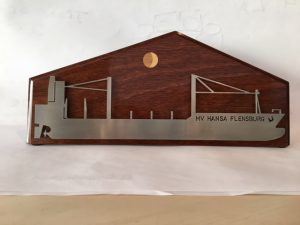 Monika Lemajic, who is project manager for business improvement at the Thales establishment, drew the ship’s profile, after which her boilermaker colleagues cut the model from aluminium. The profile was passed to a skilled joiner for mounting on hardwood timber. The timber is from a Western Australian tree known as Jarrah or Eucalyptus marginata. The electricians added the finishing touch with a plaque inscribed “Thank you from The Blue MBA 2019.” Said Ms Lemajic: “It was a great team effort.”

She was built 18 years ago to Leonhardt & Blumberg design as the first of a series of more than 30 sister vessels ordered from Chinese yards. 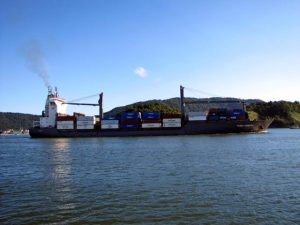 The Hansa Flensburg is employed in the Mediterranean container trade between Greek and Turkish ports.

Flensburg is the name of the most northern city and port of Germany, which lies next to the southern border of Denmark.

In the photo are Sam Xi Liu (feeder network manager for Maersk, China/Denmark, and  a representative of the Blue MBA students), Monika Lemajic, Frank Leonhardt and Ulla Kiersgaard who is in maritime services and business development with the port of Rønne, Denmark, and also a student representative.

The Blue MBA contingent was in the Hanseatic city on one of their first year assignments within their two-year part-time course which is mainly based in Copenhagen. They are seeking to strengthen their knowledge and insights across a wide range of shipping management, financial, technical, legal and other skillsets – the overall aim being to infuse a high level of strategic leadership into their callings. 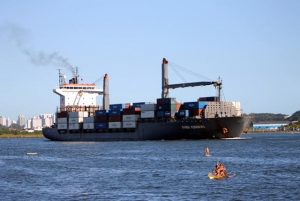