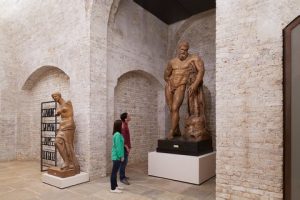 The Vaults at the Royal Academy.

From top to bottom, the Royal Academy of Arts has been revamped. It has been a Herculean task, and in the vaults, none other than Hercules or Herakles, more than 3 metres tall, wearily rests on his heavy club after his mighty labour. The Greek hero is in plaster cast, but no less impressive for that. 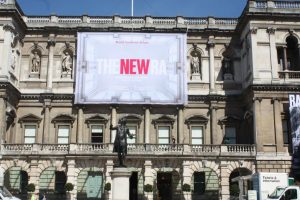 The London institution is opening to the public on Saturday May 19, 2018, its new campus unifying its two big properties in Piccadilly and on Savile Row as part of the celebration of its 250th anniversary.

On the day of the latest royal wedding, the two premises will “walk down the aisle” with each other, or to be precise will become as one thanks to a substantial new walk-through. Finding common ground between the two bulky structures was an architectural challenge because of their differing facility levels. 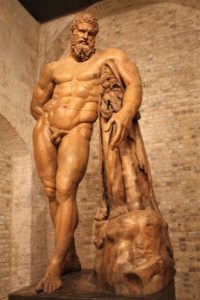 The result of the £56m project is being branded as The New Royal Academy. The redevelopment, from a blueprint of architect Sir David Chipperfield and supported by the National Lottery, allows the academy to make 70% more use of its space, sharing with the public treasures from its collection, its exhibitions programme and the work of its Royal Academicians and the Royal Academy Schools (a rare institution in modern Britain offering free tuition to selected postgraduate students, usually 15 to 17 of them).

Step forward Hercules, among the gods, people and artefacts supporting this educational role, which is highlighted more than ever. His presence helps explain why the Academy is proud to have copies in its inventory.

In the early days of the Royal Academy Schools, a body which was founded in 1769, a year after the Royal Academy itself, casts such as that of the colossal Hercules were essential. Each student would be set to draw from copies of such sculptures, before being allowed to draw from life models. This ceased to be the case some years back, and casts from the Life Room have now been brought out for all to see, presided over by Hercules. These items are in what is known as the Vaults, which with their brick composition are said to have the atmosphere of a Roman basilica.

The reproduction Hercules was part of the Farnese Collection of the Bourbon dynasty, founders of the Archaeological Museum in Naples. The full-sized cast has been painstakingly returned to its former glory. 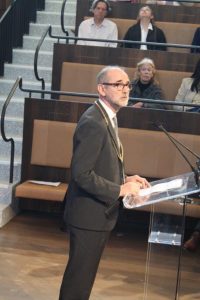 The original sculptor is said to be Glycon the Athenian in the early third century BC. This probably inspired a lost bronze statue attributed to the Greek sculptor Lysippus who lived in the following century and in turn a version in marble was found in the Baths of Caracalla in Rome – the ancient Romans made freestyle copies of earlier Greek sculptures.

The Farnese Hercules and Venus de Milo are juxtaposed with recent works on related themes by RA Schools graduates.

A new feature, continuing the educational theme, is what is called the Benjamin West Lecture Theatre, where 150 journalists attended the launch press conference. Mary Beard, the Royal Academy professor of ancient literature, notes the design of the hall is on the pattern of a Greek or Roman amphitheatre. 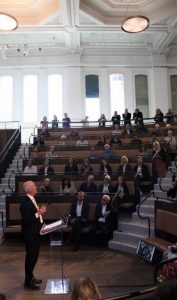 Speaking at the press launch, the president of the Royal Academy, Christopher Le Brun, described his sense of elation over completion of the scheme and the “fantastic timing” of the unveiling “on such a sunny day” and just ahead of a momentous occasion, the Royal wedding ceremony. The project was “within touching distance” of realising its fund-raising goal.

Charles Saumarez Smith, secretary and chief executive of the Royal Academy, added: “This is not just a major building development; it is an undertaking which will transform the psychological as well as the physical nature of the Academy.”

Sir David Chipperfield added: “This is a fine building, but it had been unloved.” The redesign had “given oxygen” to the whole campus.

Central to the redevelopment is the new Weston Bridge between Burlington House and Burlington Gardens, which will enable free displays of art and architecture across the campus. 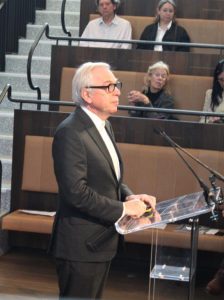 The new Royal Academy Collection Gallery will present The Making of an Artist: The Great Tradition highlighting works from the collection, including the Taddei Tondo of Michelangelo and the RA’s almost full-size 16th century copy of Leonardo da Vinci’s The Last Supper. Leonardo painted this on the refectory wall of Santa Maria delle Grazie in Milan. The original fresco quickly deteriorated and was further damaged when a door was cut into the wall, through the feet of Jesus. A full-scale copy which includes Christ’s feet was in the Carthusian monastery in Pavia and arrived in London in 1817 where it was soon purchased by the RA, which paid the substantial sum of 600 guineas for it in 1821. Students were meant to copy it, not just be inspired by it. It has been transferred from the chapel of Magdalen College, Oxford, where it has hung since 1992.

Paintings by Reynolds, Kauffman, Thornhill, Constable, Gainsborough and Turner are among other highlights. Marine aspects include Constable’s study for the painting of Waterloo Bridge, oil on canvas, from around 1820. 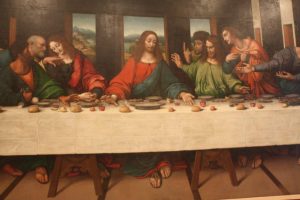 For temporary exhibitions, the Gabrielle Jungels-Winkler Galleries have been refurbished and will be inaugurated by Tacita Dean’s exhibition Landscape, until August 12, 2018.

To celebrate the opening of the new Royal Academy, a weekend-long art party on the 19 and 20 May will present free workshops, tours, displays, late-night performances, DJs and street food and cocktail bars in the RA’s Annenberg Courtyard. 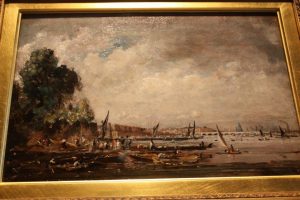 The Architecture Studio in the Dorfman Senate Rooms will open with Invisible Landscapes (until March 4, 2019), exploring the impact of digital technology on society.

The Weston Studio for displays and projects developed by students and graduates will open with Honeymoon, a group exhibition by people in their first year of postgraduate study. Among works now on display is an inkjet print based on John Lennon’s letter returning his MBE in 1969 as an act of protest against the Vietnam war. Tania Blanca’s reproduction of the letter has rather a long title: Art is a lie that makes us see the truth. Lennon’s letter to the Queen instead of £345m Letter from the Queen. 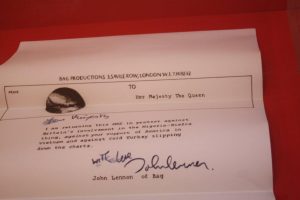 Lennon Letter to the Queen. By Tania Blanca.

The Burlington Gardens building is Grade II* listed. Designed by Sir James Pennethorne (1801-1871) as the headquarters for the University of London on a site which had previously been part of the garden of Burlington House, it was regarded as a masterpiece of mid-Victorian architecture.

Acquired by the Royal Academy in 2001, its former tenants included the Civil Service Commission, the British Academy and the British Museum’s Museum of Mankind. The Academy said that the new Chipperfield-designed architecture, together with the careful conservation of the façade, the reinstatement of the lecture theatre and restoration of the Dorfman Senate Rooms by Julian Harrap Architects, would contribute to the nationally-renowned significance of Burlington Gardens. 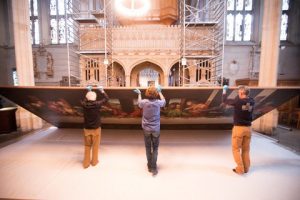 The BHSI clinches a point; all other indices dive…

The Future Face of Shipping: Mastering the Digital Wave