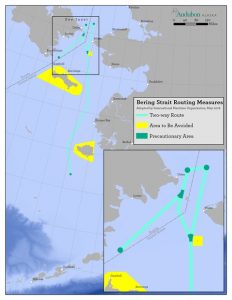 Kevin Harun, Arctic Program Director for Pacific Environment, reports from this week’s London meeting of the International Maritime Organization that milestone protections proposed jointly by the U.S. and Russia to establish arctic shipping routes and define environmentally sensitive areas in the Bering Strait were approved.  The IMO is a specialized agency of the United Nations that sets international shipping law.

The newly adopted measures steer shippers away from hazards such as shoals and reefs to established routes charted in modern times.

These measures are the culmination of over five-years of  negotiations including bilateral negotiations between the U.S. and Russia as well as input from indigenous Bering Strait communities that rely on marine resources for food and traditional culture.

With increased shipping, concerns loom about potential shipwrecks, environmental catastrophes, and casualties in the Bering Strait’s remote, arctic waters where emergencies or oil spill response is severely limited or non-existent.

Adoption of similar routing measures and protected areas in the Aleutian Islands have dramatically shifted ships away from sensitive and dangerous area.