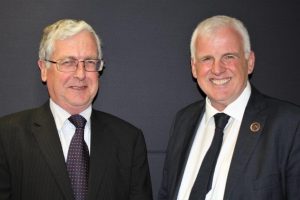 A leading practitioner in the marine insurance sector, Richard Cornah, has been made an honorary fellow of the Association of Average Adjusters.

Honorary fellowships are awarded in recognition of outstanding professional contribution to the aims of the Association. There are currently 19 honorary fellows, including members of the Bar and legal profession and of the marine insurance market.

At the annual meeting of the Association on May 10, 2018, chairman Willum Richards announced to applause this latest step in the recognition of Richard Cornah’s achievements, including his distinguished additions to the literature of marine claims and general average, his promotion of professional average adjusters as the ‘go to’ people for dealing with complex marine claims and disputes, and for his enthusiasm for educational work in the sector.

Mr Richards praised the unstinting involvement of Mr Cornah in analysis and commentary on key aspects of marine insurance, adding that he had personally benefited from this first-hand during his secondment to Richards Hogg Lindley in Liverpool, in the late 1980s.

From Cambridge University, Mr Cornah joined the energy risks department of the firm in London and managed the company’s Kuwait office between 1979 and 1982.  He qualified as a Fellow of the Association of Average Adjusters in 1984 and transferred to the Liverpool office as managing partner.

Having experienced the then rather arcane qualification process, he became heavily involved with the work of the Association’s examination committee, leading the change to a modular format that is still in place, providing clearer guidance as to the areas of study and knowledge required.

More recently, he provided the blueprint for the current examination structure whereby people from across the spectrum of the maritime and insurance fields are encouraged to take entry-level Associate qualifications in marine insurance principles and hull and cargo claims.  He was chairman of the Association in 2008 and 2009, delivering his chairman’s addresses on the topics of pollution and incidence of loss, and remains a long-standing member of the Association’s advisory committee.

Mr Cornah is co-editor of the 13th, 14th and soon-to- appear 15th editions of Lowndes & Rudolf on General Average and the York-Antwerp Rules, and his articles on topics such as the ‘reasonable cost of repairs’ have appeared in leading journals and been referenced in legal textbooks such as Arnould on Marine Insurance. A strong believer that professional knowledge should be freely and widely available, he has also prepared accessible and practical guides on hull claims and other insurance topics and provided commentaries on new editions of hull and cargo clauses and the York-Antwerp Rules, and on developments of general interest to the industry such as the Rotterdam Rules.

Since 2001, he has been closely involved with the Comité Maritime International (CMI) in its work of reviewing and revising the York-Antwerp Rules, acting as co-rapporteur for the working group responsible for the drafting of the 2016 Rules which saw a welcome return to a working consensus between insurers and shipowning interests; following that he was made a Titular Member of CMI.

In his leisure hours, Mr Cornah enjoys sailing on the Dee estuary and the company of his pet Newfoundland dogs and alpacas.