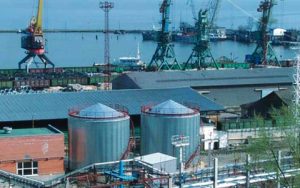 According to TagSCP statement, the growth should be attributed to the increased market demand for  key types of cargo handled at TagSCP’s terminals and thanks to favorable weather conditions during winter navigation season.
In the first three month, cargo handling in dry bulk segment (grab / suction cargoes) increased by 36% to 235,000 tonnes, primarily thanks to a five-fold surge in grain volume to 82,000 tonnes following the 2017 high yield in the country and favorable global market environment. Besides, volumes of ore rose  49% to 16,000 tonnes. At the same time, a 3-percent decline was reported in coal exports to 136,500 tonnes
There was a 38-percent decrease in break bulk cargo to 53,000 tonnes in the reporting period as the port saw a 43-percent slump in ferrous metal volumes (31,000 tonnes) since shippers of the export commodity reduced shipments. Handling of ‘big bags’ and crate cargo fell by 27% to 22,000 tonnes.