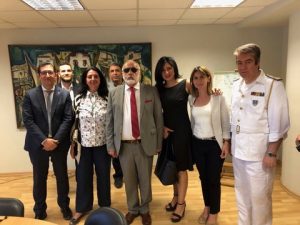 The Presidential Decree is the umbrella legislation, taking into account all national and international rules and practices, containing a set of provisions, such as safety & emergency procedures; Simultaneous Operations (SIMOPS); fire-fighting measurements; manuals overview for LNG bunkering preparation and execution; training and other pillars, which will allow Greek ports to accommodate LNG bunkering operations.

“Poseidon Med II project started 3 years ago aiming at establishing the use of LNG as marine fuel in the East Mediterranean region. It has since then worked towards this direction, using 26 partners’ know-how and expertise. The Presidential Decree that was presented yesterday is a milestone for the project and the necessary step to establish the regulatory framework which will ensure the safe and uninterrupted use of LNG as marine fuel. We are proud to see Greece among the pioneers to adopt a comprehensive regulatory framework, demonstrating in this way that LNG is a sustainable solution. In parallel, Poseidon Med II has also advanced the technical aspects for the use of LNG, undergoing technical designs for ports infrastructure and LNG fuelled vessels, as well as environmental and economic feasibility studies which will facilitate the effective transition to the LNG era”, underlined George Polychroniou, Poseidon Med II Project Manager, Executive Director Strategy, Development, Administration & IT, Public Gas Corporation, DEPA S.A. 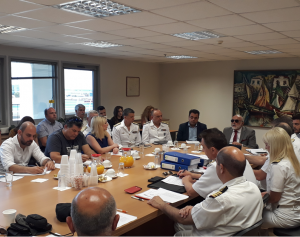 During the event, government officials expressed their gratitude to Poseidon Med II partners for actively contributing, for more than a year, to the legislation process by sharing their knowledge and expertise. The Presidential Decree, paves the way for the next regulatory steps required for the adoption of LNG as marine fuel in Greece. Representing Poseidon Med II at the ceremony, Maria Fotiadou from DEPA,Vassilis Kazis & Tatiana Eleftheriadou from DESFA and Anna Apostolopoulou & Panayiotis Mitrou from Lloyd’s Register, answering to journalists’ questions, underlined how Poseidon Med II offers the missing links for a sustainable LNG supply chain in Greece by: basic and detailed designs for LNG bunkering vessels and LNG retrofits, new building designs of LNG fuelled Ro/ Pax ferries; plan approvals for LNG bunkering infrastructure in PMII participating ports-; small scale LNG infrastructure at Revithoussa LNG terminal and the development of funding tools that will instigate the necessary investments for ports and vessels.

Class in the glass business: Gavridis Glass serves shipping and much more