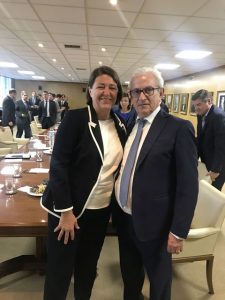 The Union of Greek Shipowners warmly welcomed the EU Commissioner for Transport, Ms Violeta Bulc, to its premises in Piraeus today. The visit took place on the occasion of the Posidonia Exhibition 2018 and as Greek shipping represents almost 50% of the EU total fleet capacity.

“The Union of Greek Shipowners is particularly honoured to welcome Commissioner Bulc to the home of Greek shipping, a stalwart of European shipping, too. Commisioner Bulc is a very active and effective Commissioner for Transport and we are especially grateful for the keen interest she has taken in the European shipping industry during her successful mandate”, the President of the UGS, Mr. Theodore Veniamis commented.

Commissioner Bulc met with members of the Board of Directors and discussed a number of topical maritime issues such as the global competitiveness of the European shipping industry, the significance of the uptake of digitalization, global developments for the decarbonisation of the sector, the completion of the EU Single Market and generally the provision of reliable, efficient, green and sustainable, as well as safe and secure shipping services for the EU trade and economic growth. Commissioner Bulc also had the opportunity to meet and discuss with young Greek ship owners, who take an active interest in shipping policy both nationally and internationally.

Commissioner Bulc referred to the recent International Maritime Organization (IMO) agreement on the decarbonisation of the maritime sector: “The global shipping community have sent a positive signal to the world with the adoption of the IMO initial strategy to reduce greenhouse gas emissions, joining global climate change efforts under the Paris Agreement. We want European operators to lead the charge and reap economic benefits from first-mover advantage in this space. To this end, I count on the continuous support of Greek shipowners in ensuring that the sector makes a successful transition to greener and ever more technologically advanced operations.” 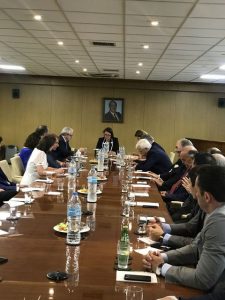 The digitalisation of the sector was also highlighted as a key element in increasing the competitiveness and the efficiency of the sector. Commissioner Bulc referred to the new legislative initiative on the establishment of the European Maritime Single Window environment, which will significantly reduce the administrative burden and costs for shipping operators. Commissioner Bulc invited young shipowners to use their expertise and to join efforts in turning EU shipping as the leader in technological innovation.

“Greek shipping, being the largest cross-trading fleet in the world, not only has a strategic role in serving the extra-EU trade for the prosperity of the EU citizens but is also a true ambassador of the EU’s leading maritime position globally. Recognition of its significance is much appreciated. We very much value the especially fruitful exchanges we had with Commissioner Bulc during her visit and look forward to continuing our constructive cooperation on all the important matters for the maritime industry”, Mr. Veniamis stated.

Moreover, he added that the Greek shipping industry supports the IMO decisions and process leading to the full decarbonisation of global shipping as soon as possible this century. This, however, will not be achievable without the development of zero carbon fuels and technologies suitable for the global ocean going fleet. The development of such fuels-technologies requires the commitment of all parties involved in world seaborne trade.