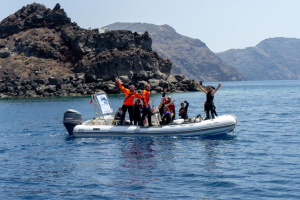 To celebrate World Oceans Day, on June 8th, an international team of 8 volunteer divers from the Netherlands, France and Greece took part in a highly demanding lost or discarded fishing net (also known as ghost nets) removal dive in Santorini. The mission succeeded in cleaning the sea of a huge ghost net measuring approximately 150 meters that was entangling marine animals and causing their unnecessary torture and eventual death. Furthermore, ghost nets continuously lose tiny pieces called microplastics which pose a serious threat to human health as they end up in our food chain.

The operation was organised by Healthy Seas together with Cousteau Divers, Ghost Fishing and the local Dive
Center, Atlantis Oia. Italian fabric manufacturer, Carvico S.p.A. was the event’s exclusive sponsor. The dive
was streamed live and broadcasted all over the world for educational purposes. Pierre-Yves Cousteau, founder of Cousteau Divers, described the mission from beneath the waves. Such an undertaking is unprecedented. 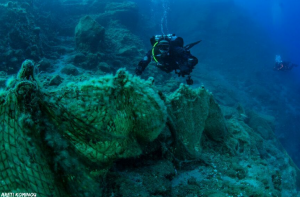 Pascal van Erp, Founder of Ghost Fishing, spearheaded the removal operation: “Santorini’s underwater
geomorphology was formed after an enormous volcanic eruption thousands of years ago. The caldera where
the fishing nets were found is basically a giant lagoon with very steep drop-offs which rapidly reaches 400m
depth. The removal mission needed therefore very strict dive planning and teamwork to get the fishing nets
safely out of the water. Carrying out a first of its kind two-way communication underwater live stream was a
very complex operation which we were able to complete successfully due to the tremendous efforts a truly
amazing team.”

After the nets were removed from the seabed, they were securely placed into large bags and will be
transported for regeneration. They will travel to a cleaning facility and eventually be delivered to Aquafil who
will transform and regenerate them into ECONYL® yarn to then be used by Carvico for the production of fabrics for swimwear.

Pierre-Yves Cousteau is a longtime advocate for the protection of Santorini’s marine environment which has
led to a campaign for the establishment of a Marine Protected Area: “It was wonderful to work with Healthy
Seas, Ghost Fishing and Atlantis Oia in Santorini. Their professionalism and dedication to marine conservation have made it possible to successfully accomplish the abandoned fishing net recovery. We hope this action will help people in Santorini and all over the world realize the critical state of the Ocean and unite to stop its destruction.”

The Healthy Seas initiative has been operating for 5 years in the Netherlands, Belgium, UK, Italy and Greece.
During this time, volunteer divers and fishermen together have recovered 375 tons of fishing nets from the
seas and from land, the equivalent in weight of 2 blue whales.

The event was held under the auspices of the Municipality of Thira (Santorini) and the Goulandris Natural
History Museum.

RMT Port Workers to strike in fight for fair pay