The 2018 Bagong Bayani Award for Community and Social Service 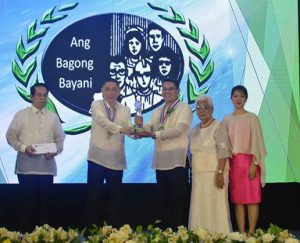 Captain Augusto P. Buenaventura receiving the trophy (The third person from the right)

Awarded to Captain of HAMBURG BRIDGE for Rescue Operation at Sea

Captain Augusto P. Buenaventura, the Master of containership HAMBURG BRIDGE, has been selected as recipient of the highly-prestigious “2018 Bagong Bayani Award for Community and Social Service” by the Bagong Bayani Foundation, Inc. (BBFI) (*1). The award ceremony was successfully held at Philippine International Convention Center, Pasay City on June 7.

The commemorative medal and trophy were presented by Mr. Ciriaco A. Lagunzad III, Undersecretary of Department of Labor and Employment, on behalf of President Podrigo Roa Duterte in front of approximately 300 Philippine government officials and other attendances.

The Bagong Bayani Award (BBA) is involved in worldwide search for the country’s outstanding and exemplary Overseas Filipino Workers (OFWs). BBA seeks to recognize and pay tribute to OFWs for their significant efforts in fostering goodwill among peoples of the world, enhancing and promoting the image of the Filipino as a competent, responsible and dignified worker, and for greatly contributing to the socio-economic development of their communities and the country as a whole.

HAMBURG BRIDGE played a significant role in rescuing and assisting 310 migrants from a boat in distress in the Mediterranean Sea, on 24 April 2016. This rescue operation was also selected for Special Recognition of merchant vessels and their crew by the International Maritime Organization (IMO) last year.

The BBFI is a non-stock, non-profit organization conceived to uphold the new heroes among overseas Filipino workers. It operates hand-in-hand with the Department of Labor and Employment (DOLE), Philippine Overseas Employment Administration (POEA), Overseas Workers Welfare Administration (OWWA) and the private sector in paying tribute to the OFWs through the Bagong Bayani Awards.