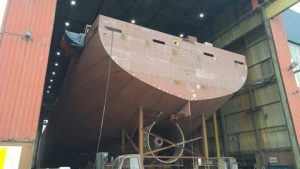 The stern/transom of the Scott Carrier

Scotline Ltd are pleased to announce that, in partnership with Royal Bodewes Group BV, they have exercised their option for a second new build 4785 DWAT Bodewes Trader to be named MV Scot Explorer and launched in Q3 2019. Currently MV Scot Carrier is being built, with the launch expected to be in July and delivery in October 2018.

MV Scot Explorer will have a length of 89.98 meters and a beam of 15.20 meter and a maximum sailing draft of 5.68 meters. She will be powered by a MAK engine whilst being fully container fitted, with Swedish ice class 1B. She will sail under the British Flag and classed under Lloyds Register. The second new build will be a near-identical sister to MV Scot Carrier. Throughout the build of the MV Scot Carrier both parties have had regular and open dialogue, looking at different ideas and concepts in order for the partnership to work well for both family-owned companies. The MV Scot Explorer will be the next addition to Scotline’s fleet of 9 owned vessels, where we are looking to renew some of our older tonnage. Currently Scotline has 15 ships in our fleet ranging from 1300 dwcc to 4500 dwcc, which gives a wide verity of scope for meeting our customers’ varying needs. 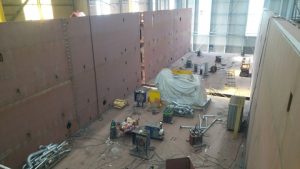 Another view of the Scott Carrier during her construction

Royal Bodewes Group is also looking to the future since their beginnings in 1812. The shipyard has made an impressive development since then, providing innovation in their designs as well as being dynamic in their workflow and building processes, and the group is constantly striving for efficiency. To accomplish this, in 2014, a new production hall was built alongside the existing hall at the shipyard in Hoogezand, which was completed in January 2015, providing additional capacity. Now Royal Bodewes Group is developing their yard by extending the two production halls to the waterfront and thus creating two construction sites meaning two ships can be built side by side. The infrastructure outside will also be improved. This is all done to enable Royal Bodewes to minimize congestion and provide the best service to their clients, both now and in the future. Construction of the production halls is expected to finish in autumn 2019.

IMCA to provide insight into important aspects of DP