25/06/2018 – A record number of companies have been admitted to the Oslo Børs marketplaces in the first six months of 2018. The amount of new equity raised by these companies is also at an historically high level, while their combined market capitalisations is a record high.

Shelf Drilling was admitted to listing on Oslo Børs today, and last Friday Star Bulk Carriers was approved for listing. The high level of activity in the primary market in the first six months of this year follows on from last year, which was a record year for issues at Oslo Børs.

A number of the new companies are among the largest and best in their industries globally. Shelf Drilling, for example, is one of the largest jack-up contractors in the shallow water segment, while Star Bulk Carriers is one of the world’s largest dry bulk shipping companies. Elkem, another company admitted to listing in the first six months of 2018, is a world leader in the environmentally friendly production of silicon-based metals and materials. 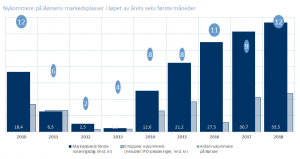 Companies admitted to Oslo Børs, Oslo Axess and Merkur Market so far in 2018:

Newly admitted companies by sector in 2018: