Volatile Capes rule the day, but…

The BDI (Baltic Dry Index) went over and above the 1,500 point threshold… geopolitics and in particular the addition of Trade Wars will spill over badly! John Faraclas’ midweek recap:

The BDI was up 91 points and at 1,567 creates another momentum, may I say a chilly one as nothing should be taken for granted as the Capes were once again the ONLY size with and upwards push…

The Panamaxes BPI – like yesterday, lost another two points and now stands at 1.334 points…

Four points lost from the Handies’ BHSI now at 569…

Same levels more or less for the Wets; the last published BDTI (Dirties) and BCTI (Cleans) stood at 702 – minus thee and 501 – plus one respectively…

The Geopolitics with the Trade Wars on and more to come, add the existing hotspots on Planet Ocean and see what is yet to come. The EU and China say they will retaliate… Await to see the outcome!

All main issues mentioned in our last reports remain the same, unfortunately! Pity as this will lead in a more dangerous society! No excuses particularly from both the warring functions and sides in the Syrian / Iraqi conflict “interwoven” with the politicians, particularly in the EU, vis-à-vis the MIGRANTS issue – in the USA too…

Let’s hope for the Thai boys trapped in a cave in north Thailand!

Another NOVICHOK incident in the UK and let’s see what’s up this time…Four months after the first incident another one comes to shake once again our society’s foundations!

The NHS in the United Kingdom celebrates its 7oth Anniversary! A milestone and worth everybody’s efforts! 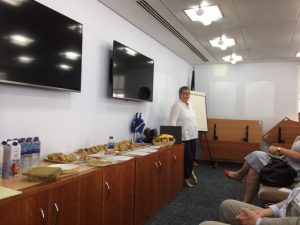 On another note an interesting WISTA-UK workshop took place at the International Registries UK office in Moorgate. Winnie Sorensen created the right environment with the right issues on “Transforming your meetings” subject. A group of 17 attendees including the speaker/coach and facilitator Winnie, initially on a one2one basis ideas encounters – think, listen and counter and then on a group of four, four groups all together brought results! 12 women and five men did their best and we look forward to more events of this kind. 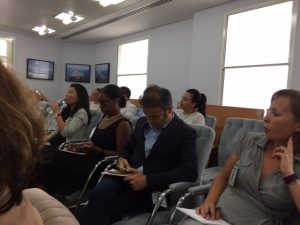 On what WISTA needs: A Christmas dinner in early December and an annual dinner and ball looks promising! Pre- and post-event discussions with soft drinks and sandwiches paid off in leading to an interesting networking session. Good to see friends from the past including Monica Kohli – first met at our Copenhagen Business School visit back in 2015 whee she was doing her Blue MBA!  Good points also by Lomar’s Nicola Wilson and Spinnaker Global’s Teresa Peacock. Our hosts too participated in this event with a team of seven, amongst them Elizabeth Bouchard, Hetty Pugh and Verity Maloney!

Coming up: Navigator’s Shipping Decision Makers Weekend at the island of the winds 21-23 September on Chios Island Greece! Log on in the respective banner in the site and book your place, then ink your diary accordingly!

Remind you the WISTA International Conference in  Tromsø , just above the Arctic Circle in Norway 23- 26 October 2018!

Moreover, just after WISTA’s event, in another Nordic county, the IBIA Annual Convention 2018 on the 6-8 November in Copenhagen! Book early to avoid disappointment! 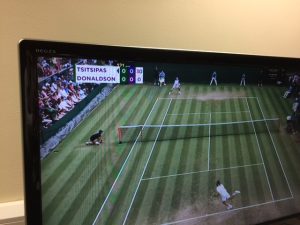 No soccer today from the World Cup in Russia but Wimbledon is on.  Federer and others in strong form but many seeded players went off… Good to see young Greek Stefanos Tsitsipas progressing to the next ground, but same was suddenly stopped due to cataclysmic rain… Let’s see how he “treats” tomorrow Jared Donaldson… 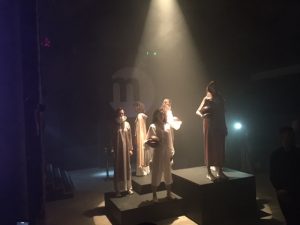 On the plinths, fashion at its best; congratulations to all students and their teachers involved!

Fashion is also an issue and allaboutshipping since its inception is quite “strong” and also supports students and graduates designers. Today we witnessed the under/the light event of istitutomarangoni, the famous school of fashion and design, at the Bankside Vaults off Blackfriars Bridge in SE1! Thanks to Dr. Evelyn Stefanaki mission was completed. We revert with a full report soon.

That’s all for tonight and continue to be on guard from actions emanating from Pirates, Terrorists and Criminals of any kind wherever you are on Planet Ocean!