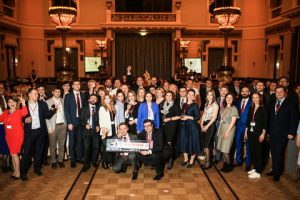 TT Club and its partner in Russia, the CIS countries and Baltics, Panditrans celebrate both TT Club’s 50thanniversary and their twenty-five year partnership in providing a unique insurance and risk management service to the freight industry.  TT Club insureds, both within the territory and those trading with the region, have enjoyed tailored extensive cover and accurate trusted advice on the special characteristics of this particular transport environment.

There has been a steady increase in importance of the container to Russian trade that began some twenty-five years ago and it was then, in 1993, that Panditrans became TT Club’s representative in Russia.  At this time the Club wanted to have experts on the ground in what was, and remains, a rapidly changing freight transport environment serving one of the largest potential consumer markets in the world.

Panditrans, with its offices in Moscow, Russia and Odessa, Ukraine, as well as contacts throughout the region, has been a perfect fit with TT Club, serving the mutual’s membership of shipping lines, port and terminal operators and freight forwarding and logistics companies.

The fact is that Russia presents a number of particular challenges to freight traffic.  Customs clearance errors in documentation can result in the confiscation of cargo, while uninsured subcontractors, and even fake ones, remains an on-going problem.  It still can be quite difficult to find a subcontractor with appropriate liability insurance with the result that freight forwarders hire uninsured carriers without clearly understanding that there is little chance of holding it liable for any loss as it has very little capital and few assets.

In addition, the sub-standard nature of the region’s road and rail infrastructure causes more incidents that damage cargo and transport asset than might be expected to occur in other parts of the world.

“It is this type of circumstance that is very particular to the Russian transport environment,” comments TT Club’s Regional Director for EMEA, Kevin King.  “This makes it essential to have indigenous, extensive expertise at the disposal of the Members.  I’m very pleased to say that Panditrans has, by partnering with the Club for the past twenty-five years, provided that expertise. I hope that TT Club Members will benefit from our partner’s guidance in a challenging political, economic and legislative environment for a long time to come.”

During this quarter of a century TT Club and Panditrans together have become adept at advising Members of the potential pitfalls in transporting freight to, from and around Russia and therefore been able to assess risk comprehensively and advise on appropriate cover.

Throughout this period Panditrans has handled in excess of 20,000 claims, benefiting TT Club Members with its in-house surveying, legal and customs expertise, together with its knowledge of the market to allow the identification of the most appropriate option to investigate and defend a claim.  Furthermore, Panditrans’ extensive contacts with insurance and regulatory inspectorates, customs authorities and law enforcement bodies throughout the territory, are unique, enabling the complete legal and ethical position to be established.

To mark TT Club’s 50th anniversary and the 25th anniversary of this successful partnership, TT Club and Panditrans held a celebratory dinner at the iconic Metropol Hotel in central Moscow in April. Over 150 guests attended and included some of the five hundred companies insured by TT Club in the region from Belarus, Ukraine, Lithuania, Latvia, Estonia and of course Russia.  An honoured guest was Vladimir Tian, the General Director of Sovtransavto, TT Club’s first and oldest Member that began its relationship with the Club in 1989.

TT Club was founded in 1968 by some of the early adopters of the unitisation of cargo, the container. From its inception, the Club has had a philosophy of listening to its Members and sharing their experiences to make the industry safer and to minimise risk whilst lobbying for and embracing change when and where it’s required. The Club has marked its 50thanniversary by issuing a report entitled ‘Brave new world? – Container transport in 2043’. This is a wide-ranging, qualitative report, produced jointly with McKinsey & Company, summarising the thoughts and opinions of industry leaders on what the future holds for the container industry.

Kirill Berezov, Managing Director of Panditrans commented, “We are proud of our long and successful history with TT Club.  Both the number and variety of our guests at the celebration is testimony to the standard of service Panditrans and TT Club together have provided to the market.  Senior figures from both global carriers and forwarders, as well as Russian transport companies, ports and rail and road operators have supported us.  Brokers also have shown their appreciation of our services for which we are grateful.”