Disappointment and Joy for Championship Contenders as Qualifying Ends 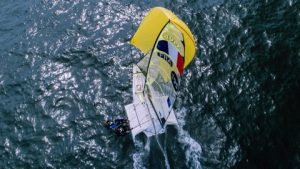 Lady luck shone on the men’s 49er skiff fleet this morning, as the final day of qualifying for the European Championship began just off the beach in Gdynia.  There wasn’t much, but a relatively stable 8-9 knots of wind and confused, steep chop provided plenty of power for all three 49er fleets to start and finish 3 full races and complete 10 qualifiers.  The afternoon fleets of women’s FX skiffs and mixed Nacra 17 cats would never see that much wind and they struggled barely notching a single race.

“We had 3 good races for the men this morning, and unfortunately the women’s FX and Nacra struggled with light wind, getting a number of general recalls and black flag starts before they were able to run one race in each fleet,” said Principal Race Officer David Campbell-James.

The long time Olympic official – known in yachting circles only as “CJ” – said the tough thing about the afternoon wasn’t necessarily the wind – there was generally 5 or 6 knots – as much as the sloppy sea state.  The morning’s higher breeze gave the men’s skiffs enough power to deal with the confused chop, something the FX and Nacra sailors didn’t have later in the afternoon. 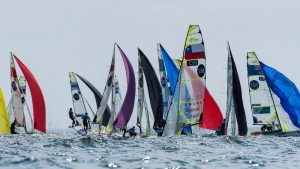 Strange sea states and tricky breeze means tricky starts, and today was no exception: In the men’s skiff fleet alone, race committees handed out 22 black flag disqualifications (BFDs) for early starts including several during a general recall.  “I really like to avoid giving out `disqualifications, but after enough recalls and false starts, it becomes the only option if you want to get a race in,” said James.

The race officer thinks the sailors are going to have to get used to this wind for the rest of the regatta.“It’s looking pretty similar to conditions we’ve had so far, but I’m going to be optimistic and hope for ten knots of breeze for the final three days,” added CJ with a sigh.

Those 22 disqualifications effected teams throughout the 49er fleet, knocking a number of teams well back into the standings, with several falling below the 25th position and out of Gold Fleet when the finals begin tomorrow.  Top French duo Fischer/Jauvin were pushed back to 27th place, while last year’s 4th place finisher at Europeans – Plazzi/Tesei – fell all the way back to 30th at the end of the qualification round.  No one fell harder than Lachy Gilmour and Ryan Donaldson though – the young Aussies were sailing a blinder, holding onto 16thplace until this morning’s gun.  After sailing a 32 (BFD), 32 (UFD), 11.0 score, they dropped all the way to 32nd, well out of gold fleet.

It wasn’t all bad news, though: 21 year olds Isaac McHardie and William McKenzie went from zeros to heros after black flagging out of Race 9 and falling well before the gold fleet cutoff.  They stormed through the fleet to an easy win in the final qualifying race, sneaking onto the big stage in the final spot by just a 3 point margin.  “We were a bit sceptical at first that we’d make that last mark, but we’re pushing hard and really happy to make it.”

The big names’ misfortune meant great news for some teams, including the first-ever Indian 49er team to make Gold Fleet at a major championship: Ganapathy Kelapanda and Varun Thakkar in 24th place.  “We really had to work for this but we want really thank everyone who’s been part of our journey.”

With the wind dropping off but the choppy waves barely subsiding, the FX fleets suffered multiple postponements, course changes, general recalls, and finally black flag starts, though those caught by the jury were effected less than the men’s 49er teams.  The surprise standout  Spanish team of Carla and Marta Munte had their worst day of the week, finishing the round with a BFD, but their scores have been so consistently good that they dropped just one place to third overall, tied on countback with Roble/Shea (USA).  Another sister/sister team – Rio Olympians Maia and Ragna Agarup (NOR) – sailed to perfection, taking two bullets with aggressive downwind sailing and brilliant tactics including a last-gybe pass over Sweden’s Julia Gross and Hanna Klinga.

The ‘bubble’ team of Amelia Stabback and Ella Clark (AUS) were overjoyed to grab that 25th position for their first trip to gold fleet.  “We lost a lot of position in our last race so we’re still a bit disappointed, but we’re really happy to get into gold and move up from here.” Said Stabback.  The Aussie team’s improvement comes down to a lot of training over the southern summer and constant work on their game, along with the sage advice and guidance from supercoach Javier Torres Del Moral, who helped lead Martine Grael and Kahena Kunze to Rio Gold. “Javi joined us just before we went to New Zealand for our training camp, and we’re absolutely loving working with him,” said Clark.  “He knows exactly what he’s talking about, and just has the best energy.

The two Nacra 17 qualifying fleets suffered the worst at the hands of capricious breeze and lumpy chop, with multiple recalls and race abandonments calling an end to the foiling catamarans’ day after scoring just one race in both qualifying fleets.

The usual suspects moved through easily to gold fleet with few changes on the day, though a few new faces will join Gold Fleet tomorrow.

Despite sailing in the Nacra together for 5 years, top Norwegians Nicholas Martinsen and Martine Mortensen were all smiles when they found out they’d not only made their first Gold Fleet at Europeans, but they’d made it comfortably, in 20th place. “It’s great to finally get some results, to be up there,” said Mortensen.  Martinsen said they’d made big changes to their campaign this winter, and they are really making a difference.  “For the first years we were all by ourselves with no partners or coaches,” he explained.  “We now have some support from Norway Sailing Federation, and the coach they provided is really helping our game out.”  Martinsen also said that their winter training camp with a number of other teams in Cagliari, Sardinia helped their game as well.  “Winter was lots of racing, lots of boathandling, lots of starts, and lots of fun,” said Martinsen.

Top Swedish Nacra skipper Emil Järuud made his first-ever gold fleet at a major Nacra championship despite a forgettable performance in his single race today.  “It just didn’t feel good out there today.  Nothing worked, we had trouble keeping speed up in the chop and light winds, trouble keeping our lanes, just really not good,” said Järuud, who felt strong about the next few days.  “We think we figured out the problem by the end of the day, and we feel ready to have good finishes the rest of the week.”

The Top 25 teams in 49er and FX split off today to sail in Gold Fleet tomorrow, while 27 Nacra 17s will do the same.  FX and Nacra scoring in the bottom half of the fleet move to Silver Fleet, while the bottom 64 teams in the 49er will split into Silver and Bronze fleets.