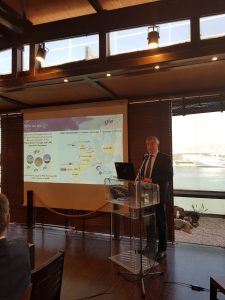 On June 22nd 2018 the External Expert Advisory Committee (EEAC) held its opening meeting at the Piraeus Marine Club. The event was marked by the attendance of top Professionals representing key Organizations from the maritime and gas industry. Participants’ list included the Gas Infrastructure Europe (GIE), the European Community Shipowners Association (ECSA), the Union of Greek Shipowners (UGS), the Hellenic Chamber of Shipping (NEE), the Hellenic Institute of Marine Technology (ELINT), the Society of Naval Architects and Marine Engineers and the Hellenic Ports Association (ELIME). The National Technical University of Athens (NTUA) and the European Investment Bank (EIB) were also represented.

The event was officially opened by the Project Manager of Poseidon Med II,  George Polychroniou. Following some brief introductions by the participants, each Poseidon Med II Activity Leader presented an insight of their respective Activity work and progress made so far. 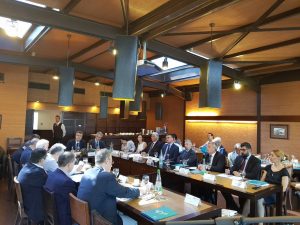 A fruitful debate concluded the event, whereby issues concerning Simultaneous Operations at Portsand their links with the Regulatory Framework were vividly discussed. Some key interventions in the meeting’s works referred to the issue of proximity of LNG infrastructure to densely populated coastal areas, as well as the challenge of accommodating LNG bunkering operations in areas thriving with touristic activity, as in the case of the Port of Venice.

Notable was also the discussion evolved on the future use of LNG as marine fuel for deep sea shipping. Prominent figures of the shipping community advocated the option for LNG in certain trading patterns and emission control areas; yet expressed their concerns on the wider adoption of LNG as marine fuel, linked to safety and supply infrastructure inadequacies.

What is Poseidon Med II project?
Poseidon Med II project is a practical roadmap which aims to bring about the wide adoption of LNG as a safe, environmentally efficient and viable alternative fuel for shipping and help the East Mediterranean marine transportation propel towards a low-carbon future. The project, which is co-funded by the European Union, involves three countries Greece, Italy and Cyprus, six European ports (Piraeus, Patras, Limassol, Venice, Heraklion, Igoumenitsa) as well as the Revithoussa LNG terminal. The project brings together top experts from the marine, energy and financial sectors to design an integrated LNG value chain and establish a well-functioning and sustainable LNG market.