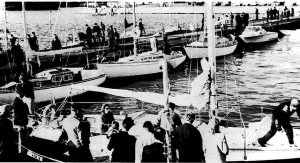 This year TheYachtMarket.com Southampton Boat Show celebrates its golden anniversary. Over the last 50 years it has been the launchpad for boating legends, seen the evolution of ground-breaking technology and tracked the rise of global marine brands…and shows no sign of stopping!

Taking place from 14-23 September 2018, this year’s Show will boast an expected 100+ debuts and more than 500 exhibitors, of which 81 will be new to the Show for 2018, and will showcase pioneering environmental research.

The Show will also mark the 50th anniversary of the first single-handed non-stop circumnavigation of the globe with Sir Robin Knox-Johnston’s Suhaili on display. Plus, sporting stars and celebrity supporters of the event over the last 50 years will be welcomed and there will be a touch of the late 1960s in the new Guinness Bar and refreshments area. What’s more, any golden couples from Southampton celebrating their 50th anniversary during the Boat Show (14-23 September) will gain free entry to the event.

Visitors will be able to see the best of the past alongside the latest and most innovate craft and technology on the market.

TheYachtMarket.com Southampton Boat Show, this is your life…

Norman Kemish and Arthur Gale launched the first Southampton Boat Show which ran for a just six days, from 29 September-4 October. There were about 50 exhibitors, compared to 500+ today.

The early Boat Show was a far more modest affair than the 2018 event will be and was contained solely within Mayflower Park with the army, based on the other side of the river at Marchwood Military Port, supplying the small pontoon where just a handful of boats were moored.

Entrance on the first day was ten shillings (50p), while tickets for the remaining days cost three shillings (15p).

Yachts and Yachting said: “The first Southampton Boat Show may have lacked quantity but quality was as good as any to be found anywhere in the world and, with what is responsibly claimed to be over 60 per cent of the British pleasure boat trade situated within a 25 mile radius of the town, the Southampton Show stands ever chance of becoming a popular annual event.”

As leader of the opposition, Margret Thatcher paid a visit to the Southampton Boat Show in a bid to improve her chances with the voting public in winning the forthcoming general election.

Sir Francis Drake’s Golden Hinde was the Show’s star attraction on the 400th anniversary of his circumnavigation of the world.

Show founders, Arthur and Norman, handed over the reins of running the event to British Marine (then known as the Ship and Boatbuilders National Federation). However, 1981 was best remembered as the year gale-force winds ripped through the Show on its final day. Unfortunately, winds of up to 55mph turned the last hours of the event into a shipwreck as Ocean Hall was flattened.

The Show underwent a dramatic expansion on the water and 254 boats were showcased afloat.

1992 saw Britain pulling out of the European Exchange Rate (ERM) and the resulting Black Wednesday (16 September 1992), which cost the economy an estimated £3.3billion.

The Show celebrated its 25th anniversary with an impressive guest list of VIP visitors that included Princess Anne and the king of Formula One at the time, Nigel Mansell. One of the head-turning attractions in the Show was a 20 metre long Jongert which had price tag of £1million – the same cost of staging the Show at the time.

Romance was in the air when a couple who met and courted on the waves tied the knot at the Boat Show.

The event was debated by Parliament which granted permission for an extra nautical day of pleasure and the Show was extended from nine to ten days.

The most expensive yacht at the 1999 Southampton Boat Show was the £2million Sunseeker Manhattan 84. Also, Jodi Kidd graced the Marina in support of her husband who was releasing a new powerboat.

The Show teamed up with the organisers of the Volvo Ocean Race and Southampton City Council for Waterfront Week. It drew in visitors by proudly showing off speedboats from the James Bond films, as well as all the things that had by that point become standard – Try-a-Boat and the Marina.

The Show turned ‘pirate’ with the introduction of its very own Treasure Island and it was ‘ooh arr me hearties’ all day long as the event supported International Talk Like a Pirate Day.

As well as welcoming a successful sailing Team GB, fresh from the 2012 London Olympics and Paralympics, the Show witnessed the Royal Marines attempting a 24 hour underwater Cycle of 240 miles, the equivalent of Cycling from Southampton to Paris.

The Show introduced its first ever passenger boat giving visitors the opportunity to enjoy a free boat trip on the Solent, taking in the impressive view of the Show from a new perspective. In total, the Show got a record 15,000 people on the water throughout the 10 days.

Further details of the exciting things visitors can see and do at this year’s milestone event are to be announced over the coming weeks. Tickets are now on sale at southamptonboatshow.com.

News from The Nautical Institute July 2018