The Power of the Public 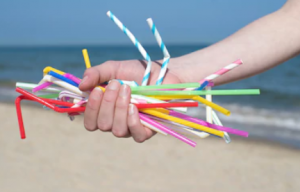 Plastic Straws:  An Environmental Problem Gaining Importance to the Public- and the Marine Industry

Every day, Americans use 500,000,000 plastic straws. Arranging these straws end-to-end would create a line of plastic over 62,000 miles long, enough to circle the Earth 2.5 times per day. Single-use plastic straws are threatening human health and the environment.

Even though straws are small, at a usage rate of over 182 billion a year in the US alone, they occupy excessive space in landfills and take up to 200 years to decompose after only being used for an average of 30 minutes. Furthermore, straws cannot be recycled in most mixed recycling programs because they damage sorting equipment due to their small size and tubular shape.

The issues of single-use plastic straws extend beyond mass production. Straws injure wildlife because they can be mistaken as food or have been found wedged inside animals. They also pose a threat by leaching chemicals into the environment while they photodegrade, contributing to the prevalent issue of microplastics. The presence of straws can lead to decreases in the seafood, tourism, and recreation industries.

Why is this an issue important to the marine community? It is another example of how these environmental and economic hazards are gaining more momentum in the eyes of government officials, businesses, and the general public. The cities of Seattle, Miami Beach, and Malibu have already passed laws that ban single-use plastic straws either at the restaurant or city-wide level, with more municipalities beginning to follow suit.

While many small businesses are opting to be plastic straw-free, global corporations such as Starbucks, McDonald’s, Hilton, Alaska Airlines, and Royal Caribbean are making efforts to phase plastic straws from their establishments. Starbucks has released that they will begin producing an “adult sippy cup” to replace the need for a straw but still offering convenience to customers. The best alternative is to skip the straw, or purchase reusable straws!

Increased educational efforts, such as National Geographic’s Planet or Plastic collection, have further increased the public’s awareness of the ocean’s fragility and plastic pollution, specifically with single-use straws. Organizations such as OneLessStraw make it easy to decrease the habit of using plastic straws by signing a pledge and receiving a coupon for a reusable straw. Celebrities such as Tom Brady and Russell Crowe are using their fame as a platform for educating their fans on the problem of plastic straws. Additionally, national outreach such as National Skip The Straw Day in February are helping to get the word out to the general public.

While there is an overwhelming amount of plastic littering the world’s marine environments, with predictions that plastic will outweigh fish by 2050, single-use straws are one of the most unnecessary forms of plastic. This makes it easy for anybody to skip the straw as the first step to Save Our Seas. With this issue being addressed—what will be the next?

Chaos and Calamity for 49er, FX Leaders as New European Champs crowned for both Classes