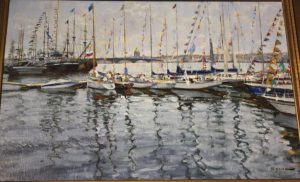 Ships at war and in peacetime – Russian painter Vladimir Yarkin has executed more than 50 significant maritime paintings ranging from 18th century scenes to modern-day nautical life. Many of his works commemorate momentous and celebratory events in the Baltic.

One of his more tranquil scenes has been on display in London courtesy of UK art dealer John Barkes, a leading specialist in making available works dating from the Soviet era up to current output from the two most prominent successor states. 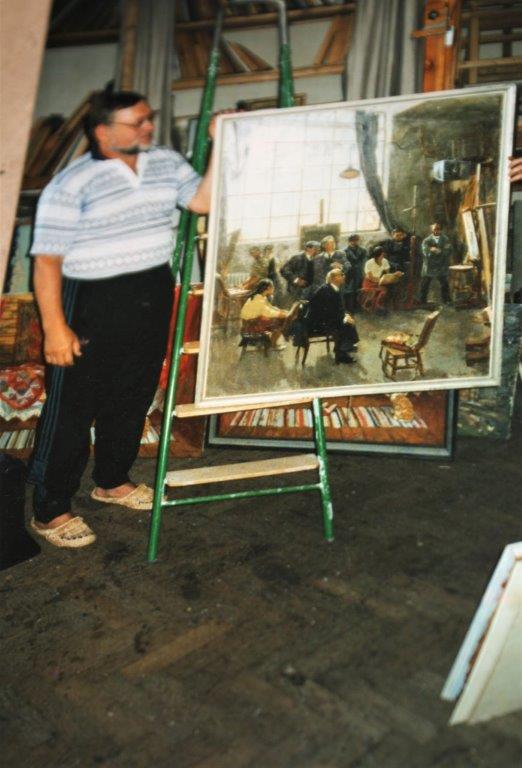 The Yarkin canvas featured by Dr Barkes at his impressive 14 metre-long stand at The Art & Antiques Fair, Olympia, at the end of June 2018, is of tall ships off Neva Yacht Club. Completed in 2003, the oil painting has in the foreground more modest craft, masts unfurled and luxuriantly reflected in the poetry of the waves, a celebration of sail by one who clearly glories in its romance. Despite having been an official artist for the navy, Yarkin’s interpretations are far from stilted. Dr Barkes has long been an admirer of the pictorial essays of this craftsman, who was born in 1939. One of the items he treasures in his photo album is a shot he took some 20 years ago of Yarkin alongside his diploma picture, which was filled with history close to home, for it depicts Tutorial in Professor Oreshnikov’s Studio.

Born in Orenburg, which lies on the Ural River in southwestern Russia, Yarkin received his early training at the KA Savitsky Art School in Penza, a city in the Volga region. He served in the Red Army for three years then taught art at Penza before being accepted by the renowned Ilya Repin Academy in St Petersburg where he was a protégé of Professor Victor Oreshnikov… to whom he pays tribute in the diploma painting.

The much-decorated Prof Oreshnikov (1904-87) tutored many distinguished pupils and was rector of the Repin institute from 1953 to 1978. He was a People’s Artist of the USSR, active member of the Soviet Academy of Arts and a Stalin Prize winner. 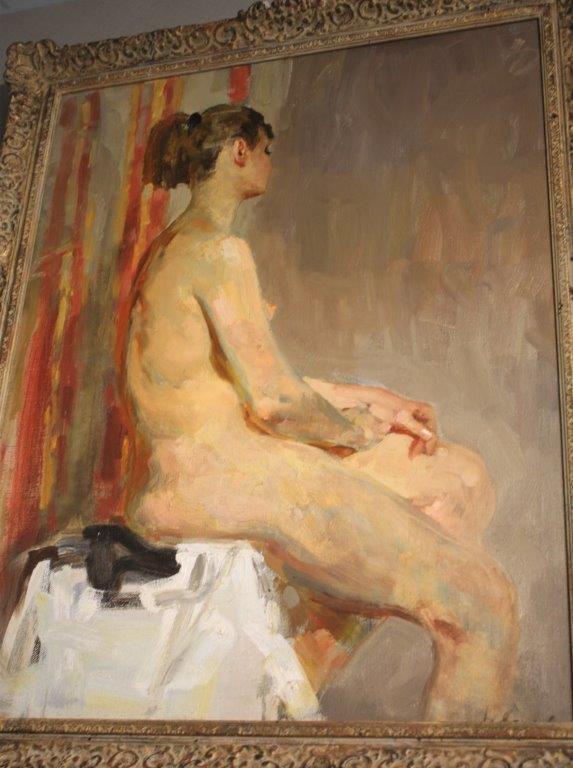 Yarkin was in 1979 commissioned to record the construction of the Baikal Railway, and was given a studio in the Maritime Museum in St Petersburg.  In 1982 he became official artist on the Soviet Antarctic Expedition and travelled widely for the next year. Much of his work is in the State Central Naval Museum, St Petersburg.

One of Yarkin’s most poignant works was his 2001 depiction of the tragic last voyage of the nuclear-powered submarine Kursk, which the previous year had sunk with all 118 hands in the Barents Sea.

Yarkin did his share of nude portraiture, as did the much younger Vladimir Ezhakov, born 1975 in St Petersburg. Dr Barkes has recently shown one of his Repin Academy atelier nude studies, a splendidly-framed oil on canvas, made in 2002. 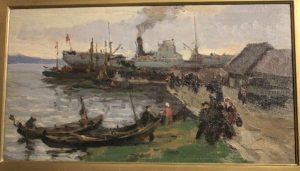 The prolific Ezhakov has confidently bestowed a wealth of colour on genres including beautiful women (many of these, and mostly clothed), café gatherings, young ballet dancers, and still life.

Born in what was at the time known as Leningrad, Ezhakov began his studies at the NK Rerikh (Nicholas Roerich) Art School and in 1997 enrolled in the Repin academy, where he was named best student in his graduation year of 2003. He studied under Prof Valery Pimenov (1920-2008), another alumnus of Oreshnikov. After graduation, Ezhakov was invited to continue his education at the Repin academy in a masters class and has taught there since 2004. Thenceforth he has been garlanded by international awards, including in Prague and the Netherlands, and his works are in private collections in many countries.

In addition to landscapes and village scenes, Leonid Baikov (1913-94) put out some admirable nautical masterpieces including Ferry terminal, Lake Baikal, oil on canvas, from 1958. A member of the Leningrad Union of Artists, he was born in the city of Vyshny Volochyok in Tver province. His family moved to Leningrad in 1927. Tanya, my Muse. By Evgeni Kazmin.

Having helped bring to attention the wide range of disciplines of Evgeni Kazmin – noted among other achievements for his mural and mosaics – Dr Barkes has been showing further vibrant works by him. One of the most striking has been an oil painting on canvas entitled Tanya, My Muse. Dr Barkes says that he discovered this painting in the stacks of Kazmin’s St Petersburg studio. The reaction of 1986-born Kazmin was to smile, shake his head and say quietly: “Tanya, my muse, an inspiration, the best model I ever had.”

One of the top artists of Crimea, of Ukraine, and indeed the Soviet Union, was Viktor Ivanovich Tolochko (1922-2006). A main inspiration for this Honoured Artist of Ukraine was the territory of Crimea, its seascapes, cliffs, landscapes and flowers. Even in the domestic scene Setting the Table we are within sight of the sea. Tolochko had some 30 solo exhibitions in his lifetime, including in Moscow, Kiev, and frequently Simferopol. He died at Yalta. Setting the Table. By Viktor Tolochko.

Vladimir Kolesnik (1920-1986) was born in Ekaterinoslav province, Ukraine, and spent most of his life in Kiev, studying at the capital’s art institute. His works with their rough-hewn quality capture country life, and he applied the style to Boathouse, Spring, in oil on board from 1960.

Of a more intimate nature is an utterly charming oil painting on board, Feeding Geese by Evdokiya Usikova (1913-1996). She was born in Yankovka in Kharkov province of Ukraine, and graduated from Kiev Art Institute in 1940. Rightly, she was deemed a Merited Artist of Ukraine. More information is at www.johnbarkes.co.uk