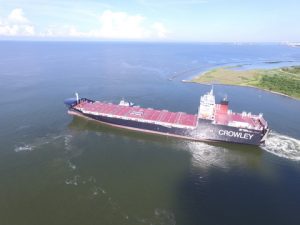 The new Crowley ships, built specifically for the Puerto Rico trade, are 219.5 meters (720 feet), 26,500 deadweight tons (DWT), and will be able to transport up to 2,400 twenty-foot-equivalent container units (TEUs) at a cruising speed of 22 knots. A wide range of container sizes and types will be accommodated, including 53-foot by 102-inch-wide, high-capacity containers, up to 300 refrigerated containers, and a mix of about 400 cars and larger vehicles in the enclosed, ventilated and weather-tight Ro/Ro decks. This type of shipboard garage is offered exclusively by Crowley in the trade. 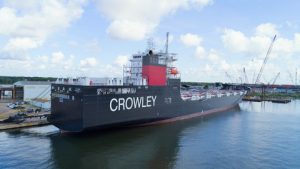 Another view of the “El Coqui”

“This delivery represents another milestone in our unwavering commitment to Puerto Rico and the Jones Act,” said Tom Crowley, chairman and CEO. “We have dedicated significant time, effort and more than $550 million, which includes these new ships, to transform our Puerto Rico shipping and logistics services to world-class standards. We thank the men and women at Crowley, VT Halter Marine and other partners, who have dedicated themselves to bringing this magnificent new ship to life.”

“The talented workforce of VT Halter Marine is to be commended for its dedication to delivering El Coquí to Crowley,” said Rob Mullins, chief executive officer of VT Halter Marine. “We are proud to be a part of Crowley’s long-standing legacy in transportation services, and recognize the important role these vessels will play in enhancing supply chain services for Puerto Rico shippers.”

Construction of El Coquí, which is named for the popular indigenous frog on the island, has been managed in the shipyard by Crowley’s solutions group, which includes naval architects and engineers from company subsidiary Jensen Maritime.

“This is a thrilling time for the U.S. shipbuilding industry, as evolutions in LNG technology are providing a historic opportunity for American yards and the supporting industrial base to design, build and outfit some of the most technically-advanced and environmentally-friendly vessels that are the envy of the world,” said Matthew Paxton, president, Shipbuilders Council of America. “American skill and ingenuity, as well as critical laws like the Jones Act, serve as the backbone of our industry and embolden innovation and investment in domestic shipbuilding. El Coquí is a shining example of the work being done each day in our industry, and we are proud to support her, her crew and those who built her, as El Coquí embarks on her first journey from Jacksonville to San Juan.”

The Jones Act is a federal law that regulates maritime commerce in the United States. The Jones Act requires goods shipped between U.S. ports to be transported on ships that are built, owned and operated by United States citizens or permanent residents. Also known as the Merchant Marine Act of 1920, the law is vitally important to maintaining a strong U.S. maritime capability.

Fueling the ships with LNG will reduce emissions significantly, including a 100-percent reduction in sulphur oxide (SOx) and particulate matter (PM); a 92-percent reduction in nitrogen oxide (NOx); and a reduction of carbon dioxide (CO2) of more than 35 percent per container, compared with current fossil fuels. Working with Eagle LNG Partners, the ships will be bunkered from a shoreside fuel depot at JAXPORT.

Details, photos and videos of the ships and related projects under the Commitment Class project can be found at this project microsite.

Crowley has served the Puerto Rico market from the 85-acre Isla Grande Terminal since 1954, longer than any other carrier in the trade. The company, with 300 Puerto Rico employees, offers more weekly sailings in the market than any other shipping line.

About Crowley
Jacksonville-based Crowley Holdings Inc., a holding company of the 126-year-old Crowley Maritime Corporation, is a privately held family and employee-owned company that provides marine solutions, energy and logistics services in domestic and international markets. Crowley operates under four business units: Crowley LOGISTICS, a singular ocean liner and logistics supply chain division; Crowley SHIPPING, which encompasses ownership, operations and management of vessels, including tankers, container ships, tugboats and barges; Crowley FUELS, a fuel transportation, distribution and sales division that also provides liquefied natural gas (LNG) and related services; and Crowley SOLUTIONS, which focuses on government services, including vessel management for government agencies, as well as engineering, project management, naval architecture through its subsidiary Jensen Maritime, and marine salvage and emergency response through its 50 percent ownership in Ardent Global. Additional information about Crowley, its subsidiaries and business units may be found at www.crowley.com.