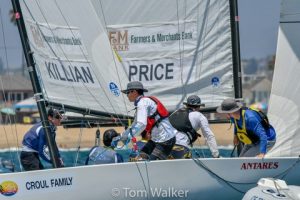 MATCH OF THE DAY – Christophe Killian (USA) led early, but in the end lost to regatta leader
Harry Price in a superbly contested match on Thursday, at the 52nd annual Governor’s Cup
presented by Farmers & Merchants Bank and hosted by Balboa Yacht Club

The pre-start was hotly contested, with Price controlling Killian until the final 45 seconds. In a risky
escape move, Killian jibed close ahead of Price who arguably had to alter course to avoid a collision,
but the umpires green-flagged it (no penalty).

Killian ended up winning the start by a boat length and led at the first two crosses up Leg 1. However,
later in the first leg he could not hold off Price, who charged into the lead with slightly better boat
handling.

Down the Leg 2 run, Killian pulled even, but Price aggressively luffed him into “downwind jail” (off to the right side of the gate) and both sailed well past it. Eventually, Price led Killian back to the gate and
aggressively covered his opponent for the balance of the race. The two teams were never more than
three boat lengths apart – and that was the delta at the finish.

The win helped cement Price’s tenuous standing at the top of the leaderboard on 15 wins (14.5 points
after being docked half a point on Tuesday for failing to avoid contact). He went on to win his Flight 19
match against Felix Jacobsen (DEN), ending the day undefeated with five wins and 15.5 points.
Killian was involved in the other big match of the day against another pre-regatta favorite, Leonard
Takahashi (NZL, Royal New Zealand YS). Takahashi had defeated Killian in Round Robin 1, but trailed
in most of today’s aggressively-sailed (by both teams) match – coming from far behind and passing
Killian in the final 100 meters for the win and a solid 4-1 day, losing only to the steady Chris Weis
(USA, Del Rey YC).

Meanwhile, yesterday’s Jack “The Giant Killer” Parkin (USA, Riverside YC), who on Wednesday had
defeated both Price and Takahashi, had a less auspicious day today with only two wins. He beat
Jacobsen and Wilson, while losing to Matt Whitfield (GBR), Will Boulden (AUS), and Clare Costanzo
(AUS). Even if Parkin and Boulden win their remaining three matches, and Killian loses all three, they
would only be tied on points, and Killian would get the tie-break nod having beaten Parkin and Boulden
in their Round Robin 2 match.

David Wood (USA, Balboa YC) had his best day, notching wins against Whitfield, Boulden, and
Jacobsen, and losing only to top dogs Price and Killian.

With a steady 5-9 knots of breeze most of the afternoon, in the face of a dying breeze, Principal Race
Officer, Don Becker, wisely halted the proceedings as planned, after Flight 19. The remaining three
Round Robin 2 flights will be raced Friday beginning at 11:30a PDT before the start of the semifinals.

Though the four semifinalists are mathematically decided, the remaining three Round Robin 2 flights
on Friday could have a significant impact – the leading team at the end of the Rounds Robin gets to
choose their semifinal opponent.

The Recycling of Ships