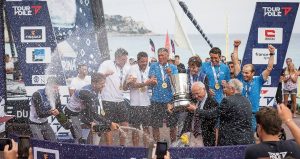 Persistence and tactics won out in the end as Lorina Limonade Golfe du Morbihan (Quentin Delapierre, Kevin Peponnet, Bruno Mourniac, Tim Mourniac, Corentin Horeau) lifted the Tour Voile championship trophy for the second time in three years. Controlling their nearest rival Beijaflore (Valentin Bellet, Guillaume Pirouelle, Valentin Sipan, Julien Villion) from the off in today’s Super Final, they put paid to any chance of the contenders swiping victory at the final hurdle and consigned them to the second step on the podium. Team Reseau Ixio (Sandro Lacan, Jules Bidegaray, Robin Follin, Pierre Quiroga) had third place all wrapped up with a day in hand and #SaillingArabia fought tooth and nail for a fifth place in today’s race which would clinch fourth place for them overall ahead of Lorina Mojito Golfe du Morbihan.

The Tour Voile is renowned as a mental and physical tour-de-force and this 41st edition was no exception. After 14 race days and thousands of kilometres clocked up in land-based moves from Dunkerque to Nice via stops in several of France’s iconic sailing destinations, 10 boats were admitted to the Super Final where double points were up for grabs. Several dramas were unfolding within the top 10, the most compelling of all being the ongoing head-to-head between Lorina Limonade Golfe du Morbihan and Beijaflore. Rivals for victory from day one, these two entered today’s Super Final with very specific obstacles between them and the cup: to close the points delta and claim victory Beijaflore needed to finish two places ahead of Lorina Limonade, whereas for the overall leaders a straightforward finish ahead of their rivals would be sufficient.

Lorina Limonade Golfe du Morbihan had a clear strategy heading into the final, crucial race – it was cleverly calculated and almost perfectly executed. Taking advantage of a stronger start than Beijaflore, they immediately went to work, covering, controlling and blocking their adversary at every opportunity. Eventually Beijaflore decided to choose open water over the inside of the course in an attempt to free themselves from Lorina’s clutches and search for a little more air at sea. It proved to be the wrong decision and Lorina was able to pull away, opening the gap and putting a well-earned victory in the bag.

Kevin Peponnet, Lorina Limonade Golfe du Morbihan: “Our strategy was to start as close to Beijaflore as we could, put them under pressure and push them to make a mistake. We looked at several scenarios yesterday evening, this seemed the least difficult, block the other boat and let the rest of the fleet go ahead. They got ahead of us a few times but we didn’t quit. We are so happy and honoured to have this experience.”

But Lorina’s victory wasn’t just a question of keeping their nerve on the final day – the team had performed consistently in each of the seven Acts, banking four wins and nine podium finishes over 14 race days. Beijaflore was never far behind them, with five wins and seven podium finishes, however after placing third overall last year, the team had their eyes on the main prize.

Valentin Bellet, skipper Beijaflore: “We’re very disappointed, we felt we could do it. It didn’t go the way we wanted. We got ahead of Lorina Limonade at one point, we tacked in front of them but then we ran into a rougher bit of sea and they got past us. We chose the right and it didn’t pay. On this second tour perhaps we took more risks and it didn’t pay off. But we’re proud of our tour, we qualified for all of the Nautical Stadium finals and we were at the top pf the classification throughout.”

While the two top dogs were busy battling it out at the back of the fleet, numerous other skirmishes unfolded throughout the rest of the fleet as at least three boats battled for a place in the top five. Perhaps the biggest surprise of the Super Final was the victory of CER 2 Ville de Geneve, skippered by Victor Casas and Laurane Mettraux, who waited until the very last day to rack up their first win of the tour. After numerous leadership changes at the front of the fleet, the young Swiss team took pole position on the final upwind leg and crossed the finish line ahead of Team Reseau Ixio and Dunkerque Voile – winners of the amateur classification.

Laurane Mettraux of CER 2 Ville de Genève: “No better way to finish than winning the Super Final. We handled the pressure well. Our performance in this Tour Voile exceeded our expectations, we’re really happy but we realise we still have a lot of work to do.”

CER 2 received the Finagaz prize for Fighting Spirit for their performance in the final Act of the Tour Voile 2018.

Fifth and sixth place of the day for #SailingArabia and Lorina Mojito left them closing out the top half of the top 10, while finishing last in the Super Final meant Cheminees Poujoulat and skipper Bernard Stamm missed out on their objective of a top-five spot by just one place.

#Sailing Arabia, who placed fifth overall last year and were aiming for a podium place this year, also missed out on their aim by just one place.

Stevie Morrison, skipper #SailingArabia: “When you get to the last race you’re looking at your overall position, we went in to try and execute a good start. We had a good start and shot away from the fleet and we had a big lead at the first mark, we took a clear rounding at the leeward mark and unfortunately the wind shifted about 20 degrees left and we were back in the bunch but the wind didn’t go where we wanted it to.”